Ocula is a minor character in Small Soldiers. He is a one-eyed creature who is very shy. He can only speak in screeches unlike the others, and does not seem averse to put his only eye in jeopardy.

We first see him in the movie were he and the other Gorgonites that were hiding in the Garbage Bin trying to escape the Commando Elite.

Ocula was created by Irwin Wayfair who was toy creator of company called Heartland Playsystems and then bought out by Global Tech. Industries. His partner's name was Larry Benson (the creator of the evil Commando Elite). 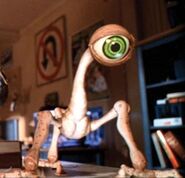 Retrieved from "https://hero.fandom.com/wiki/Ocula?oldid=1999243"
Community content is available under CC-BY-SA unless otherwise noted.