Odette is the tritagonist of Leap!. She is a cleaner at Paris Opera Ballet Regina Le Haut's Mansion. She is voiced by Carly Rae Jepsen.

Odette is a tall, attractive woman with dark brown hair tied up in a bun and blue eyes.

She wears a red vest over a white top, a dark blue and white long skirt, and brown leather shoes. Due to her injured leg, she carries around a cane.

She is cold, unsympathetic, hostile and bitter at first, but patient, kind, wise, caring, supportive and helpful. Despite helping Félicie from the janitor after he caught her trespassing into the Paris Opera Ballet, she acts hostile and bitter. She notes her dislike of children, especially orphans like Félicie. Despite annoyed by the young girl's antics, Odette shows a softer side by allowing Félicie to stay with her and sharing her portion of rations.

While she does appear to have a cold facade, in reality, Odette is kind and patient. This is shown when Félicie messes up during her ballet training, she does not get angry at her. She is supportive and helpful by giving advice to Félicie and encouraging her during a dance battle against Camile.

Odette was considered to be the best dancer of her generation before an accident caused her to become disabled. She would become a cleaner to the Opera house for the next ten years, at the same time she would work under Regine Le Haut. 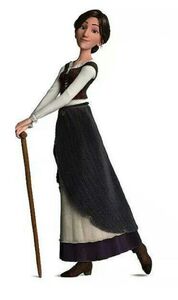