Odster (by Garfield)
Odor (by Nermal in Garfield's Pet Force)

Superhuman strength (as a superhero)

Odie is the deuteragonist of the Garfield franchise. He is Garfield's best friend and sidekick.

Odie is the lovable, yet goofy, kind, optimistic, dependable, independent, emotional, outgoing, determined, intelligent, and even-tempered yellow-furred, brown-eared beagle, who is Garfield's sidekick and rival and also his best friend. He is constantly panting with his very large tongue, and the only character without a "voice" (though he was once shown to be thinking "I'm hungry.", and in Garfield in the Rough, he "says", "I'm afraid!" over and over, faster and faster, in the "Run, Run!" scene (though this is not confirmed). More recently, he was seen actually speaking in one of Garfield's dreams sequences. One strip shows him enjoying classical music on the TV with a novel, War and Peace, in his lap after Jon Arbuckle and Garfield leave the house.

Odie's original owner was Lyman, a friend and roommate to Jon. He first appeared on August 8, 1978. However, Lyman disappeared in 1983 and Odie became a pet to Jon. Odie is, to Garfield, a complete slobbering idiot (though it is not the actual case, since Odie did manage to take revenge on Garfield occasionally, and Garfield usually cannot notice it). He is rarely seen without his giant tongue and drooling. Recently, Odie seems to be walking on two feet more often.

He is voiced by Gregg Berger.

Odie was based on a car dealership commercial, written by Jim Davis, which featured Odie the Village Idiot. Davis liked the name, "Odie" and decided to use it again. When Garfield was first submitted, Davis called Odie "Spot." He then visited cartoonist, Mort Walker to show him his strips, and Walker told Davis, "I had a dog named Spot.". When Davis asked "Really?", Walker replied "Yes, in Boner's Ark, one of my comic strips.". Davis said "Oops!" and changed Odie's name. Odie first appeared in the strip on August 8, 1978; the date is considered his birthday. There has been only one comic strip, that celebrates Odie's birthday, in 1995. He was originally a pet to Lyman, but Lyman disappeared from the series after about 5 years (with the exception of a one-panel cameo appearance in the strip for Garfield's 10th birthday). Odie eventually becomes a pet to Jon. There are some strips, however, which state that Odie was originally owned by Jon. In the motion picture, Odie was adopted by Jon at a veterinarian center.

Odie is the only animal character in the Garfield series without a recurring voice bubble, as he is portrayed as a "normal" house dog. However, he was shown thinking, "I'm hungry." in an early strip. He also has said, "Hi to the people, dummy." and sang, "Lady of Spain, I adore you.", while Garfield was using him as a ventriloquist's dummy. He also said, "I don't know, I'm kinda scared.", as a "mistake" in the cartoon episode, Mistakes Will Happen, and said to Garfield, "No, you're beautiful!" in the episode, DJ Jon. More recently, he was seen actually speaking in one of Garfield's dream sequences. As mentioned before, he sometimes thinks like Garfield.

On the cartoon, he speaks minor words such as "Ta-da!", "Huh?", or, more commonly, panting, "Yeah yeah yeah!". He has said more intelligible sentences, such as "No horsey?" in the episode, Dessert in the Desert, and on the first episode, he even says "Right!", while agreeing with Jon. When he talks on the show, he speaks by actually moving his mouth, although other dogs have also been shown to do so. Odie speaks in a similar manner in Garfield Gets Real and its sequels, frequently saying, "My bone!". In the Reading Ring game on the Professor Garfield site, if one manages to get the June 21, 2001 Strip strip, while facing Dr. Stripp, having the third panel will let the player hear Odie say, "Uh-huh!" after Garfield's dialogue.

Jon and Garfield have to support all the dialogue for the comic strip.

Odie is, to Garfield, a complete slobbering idiot, but there may be more under the idiotic surface. One strip shows him enjoying classical music on TV with the novel, War and Peace by Leo Tolstoy, nearby after Jon and Garfield leave the house. Another has him lock the others out of the car on a camping trip, where he enjoys the sandwiches, radio, and potato chips, while the others just get wet. In others, he has been seen setting decoys, writing poetry, and finding a complete superhero outfit, making Garfield look like a loser in a few seconds. One theory is that there are two Odies, a smart one, and the more common idiot. It may be that Odie is actually smarter than he appears, and merely uses the idiotic front as a means to gain an advantage over Garfield. In two strips, Garfield went to see what was at the end of Odie's tongue, and it turned out to be a second Odie (which Garfield dismissed as an effect of a bad can of tuna from the previous night). Odie has managed to take revenge on Garfield occasionally, and Garfield sometimes cannot avoid noticing it. Garfield acknowledges this by saying, "He's not as dumb as he looks, but then again who could be?". However, Garfield on numerous occasions actually does care a great deal for Odie, most notably in the first Garfield special, Here Comes Garfield, in which Odie is briefly captured by the Dogcatcher and Garfield realizes through flashbacks of him and Odie playing together and how sad his life would be without him (in these series of flashbacks by Garfield, the song, So Long, Old Friend is played in the background). In one strip, Garfield states that Odie is made of rubber. Other times, Garfield tries to put the blame on Odie for some of the mishaps he has done. Odie once tricked Jon into giving Garfield an enema.

Odie all too often gets kicked off the table by Garfield; once, Odie tried to push Garfield off the table, but Garfield was too heavy. In addition to getting kicked off the table, Odie is often the victim of Garfield's pranks. Curiously, Garfield has taken offense to others treating Odie in this manner. In one strip, he punches out another cat, who beats up on Odie, insisting, "Nobody beats up on Odie but me!". Similarly, in Garfield: The Movie after seeing Happy Chapman use a shock collar on Odie, he says, "Hey, nobody gets to mistreat my dog like that except me!".

Odie does manage to get a little revenge on Garfield. Once, Jon accuses Garfield of clearing out his closet except for the T-shirt saying, "I Love Cats.". While Garfield professes his innocence, he is hurled out of the house. Comically, Odie steps out to laugh at Garfield, wearing a plaid shirt, indicating that he framed Garfield. Once, he managed to give Garfield a taste of his own medicine in a strip, where Garfield tried to have fun with an Odie mask. Odie wasn't at the edge of the table, and while Garfield wondered where Odie was, he showed up (wearing a Garfield mask), and kicked Garfield off the table. Odie would also commonly do things to Garfield, but he gets his revenge. In one storyline, Garfield gets beat up by a bulldog after kicking him and has to wear a cast for nearly a week. The cast covers Garfield's entire body but his face. Odie torments Garfield throughout the duration of this time. In the final strip of the storyline, though, Garfield tells Jon that he would like to keep his cast after being asked what he would like to do with it, and strikes Odie with it. 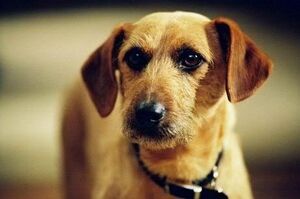 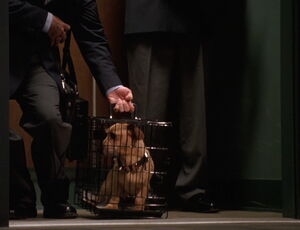 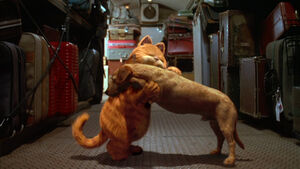 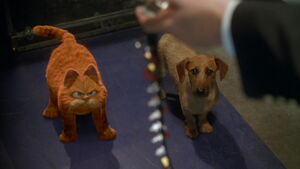 Garfield and Odie cornered by Chapman. 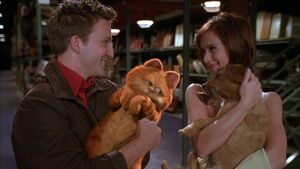 Garfield and Odie reunited with Jon and Liz. 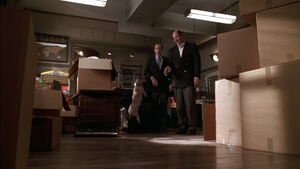 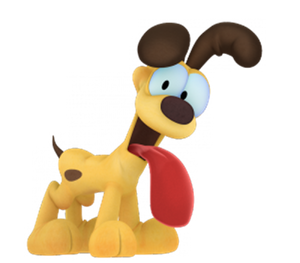 Odie in the Garfield show. 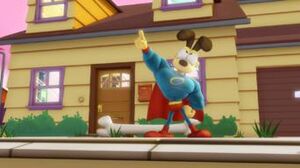 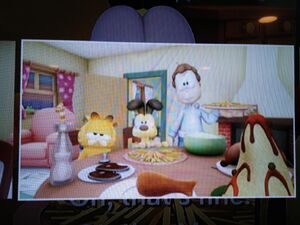 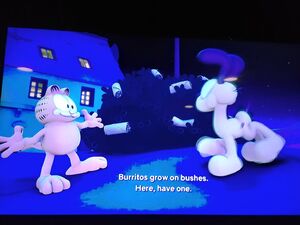