Odin is a fictional character in the Marvel comic book universe. He is the Norse God of the sky, wisdom, time, and the dead, king of Asgard, and the father of Thor Odinson, and adoptive father to Loki Laufeyson. Odin is also the co-leader of the Council of Godheads, and was a member of the Stone Age Avengers.

He was created by the late Stan Lee, Larry Lieber, and the late Jack Kirby.

In the Marvel Cinematic Universe, he was portrayed by Anthony Hopkins.

Based on the god of the same name from Norse mythology, Odin is the son of Bor (father, one of the first Asgardians) and Bestla (mother, a frost giantess). Bor and Bestla also have two other sons, Vili and Ve. He claims to have created humans as he felt the world was lonely. But his father was angry and created things to plague humanity. With the aid of his brothers, a young Odin battles and defeats the fire demon Surtur.

Many millennia later, Odin would reveal the origin of his powers and the eventual fate of his brothers; they were killed by Surtur, but gave their power to Odin. Later Surtur was imprisoned inside the Earth for centuries by Odin after forming an alliance with the trolls. Odin becomes ruler of Asgard, and eventually falls in love with Gaea, in time becoming the father of the Thunder God Thor as he wanted a son who would be strong on both Asgard and Earth.

He creates a cave in Norway for her to give birth in. He notices that Thor's eyes are those of Bor's though, and realizes one day 'the wheel will turn again'. He then returns to Asgard with Thor, and his wife Frigga acts as Thor's mother. Odin is also the adoptive father of Loki, a child of Giant blood whose father king Laufey is killed by Odin in battle.

Odin adopted Loki as part of a deal with his father Bor's spirit so that Bor would stop haunting him for replacing him, unaware that Bor's intention was that the child would bring about his son's downfall. Despite Odin's best intentions, his sons become bitter enemies, with the feuding often requiring Odin's mediation. Odin also was the father of Balder by the way of Frigga; thus, Balder is a half-brother to Thor.

Thor's preoccupation with Midgard (the Asgardian term for Earth) is a constant annoyance for Odin, who as punishment has taken Thor's powers on at least three occasions. Thor's acceptance of the sanctions along with his willingness to atone for his transgressions, not to mention his continued noble intentions and bravery, however, eventually convince the All-Father to relent and thereby restore Thor's original powers and identity, once he saved Asgard by threatening to draw the Odinsword when Seldring stole the Odinforce, as Odin had briefly given it to him to strip Thor of half his power, but Seldring had refused to return it after depowering Thor and planned to rule Asgard.

Odin possessed all the conventional attributes of an Asgardian God. However, as the king of the Asgardians, many of these attributes were significantly superior than those possessed by the majority of his race.

Odin has access to a force known as the Odin force. This lets him manipulate vast cosmic energy power. This power grants him spectacular feats, For example he has been shown to read minds from across dimensions, create force field barriers that are nearly impossible to get through, alter his size, Force blasts strong enough to one shot silver surfer. The Odin force grants him the power to enchant items like Mjolnir.

Odin is highly talented and practiced with this Odin force; He has been able to bring back people from the dead, fight Thanos and even Galactus. At his peak strength with the Odin force, he was able to attack Galactus (a hungry Galactus) and make him unconscious for a short time before entering the Odin sleep to replenish his energy. The Odin force also grants him the power to give immortality. Odin has shown to be able to create and destroy a galaxy, teleport Asgard to Earth, project energy blasts powerful enough to demolish worlds, make a world collapse on an enemy flying to him from space, stop time and space, and much more.

In battle, Odin often carries the magical spear Gungnir ("The Spear of Heaven"), an artifact made of the mystical metal uru, that he uses to channel his personal energies, though possessing no abilities of its own; and the power scepter Thrudstok, a small mace. Odin also bears Draupnir (the "Odinring") as a symbol of supremacy, though its specific properties are as of yet unknown. He can manipulate energy for various effects, including projection of concussive force, creation of force shields, levitation, molecular manipulation of matter, matter-energy conversion, illusion-casting, and inter-dimensional teleportation. Odin, however, is not totally self-sufficient. Odin commands the life energies of the entire Asgardian race, and can absorb any and all of their life energies into his person at will, even to the point of restoring life to a dying Asgardian. While possessing power that is inherent opposed to the need for outward sustenance Odin must once a year undertake the Sleep of Life, also known as the Odinsleep - a state of deep sleep lasting for one 24-hour day to keep his powers from waning. During this time Odin is guarded closely as he is vulnerable.

Odin is highly resistant to nearly all forms of superhuman levels of attack. If injured, the nearly limitless mystical power of the Odin Force which flows through his veins will fix the damage instantly. He has been shown to not be affected by attacks from Silver Surfer for example, demonstrating his durability. He can withstand powerful energy attacks from cosmic-level entities unphased, though to what extent is unknown.

Odin can teleport himself and others to any location he desires, even to alternate dimensions, he proved capable of teleporting Asgard over New York City just to show how powerful he was(and that he was capable of dimensional transportation).

Odin can manipulate all forms of energy(light, heat, etc.) for a variety of affects. He has proven capable of manipulating mystical energies as well.

Odin has proven capable of being able to stop time itself, reverse time, and even create time bubbles of which prevent outside interference.

Odin feats include transmuting the elements themselves, creating new worlds out of nothing, rekindling dead stars(such as turning a dying red sun into a vibrant blue star), effortlessly destroying entire galaxies, and even repairing damage that had occurred to large portions of the universe.

Odin has created force fields that are completely impenetrable and can shield entire cities from nuclear blasts without cracking.

Other abilities include reading minds across dimensions, mastering countless powerful spells(mainly Asgardian in nature). An example of this is how Odin put the worthiness enchantment on mjolnir. The enchantment is so powerful that it will always remain on mjolnir(even if Odin dies), and can only be removed by Odin's will or by a being of superior power.

Odin is one of the oldest Asgardians, despite this he has been shown to lift over 60 tons (the average is 30 tons for a male), His highest feat in old age during the time of the celestials 3rd host on earth he was shown to be able to lift 75-90 Tons. But he could also lift heavier with his powers but these are just his natural strength feats. He has also been shown to be able to move faster than earths best human athletes.

Odin was able to battle against an army of his brother, Cul's gods for forty days and forty nights without tiring.

Odin has been shown to have better agility than human athletes, his reflexes also rival Thor (This could be down to the Odin force)

To sustain his Odin force he has to Odinsleep once a year. This is when he deep sleeps for up to or over a week and becomes mortal in this time, so he is very vulnerable. He has claimed that “love” is a weakness for him; he has been blinded by it and not made the correct choices before. 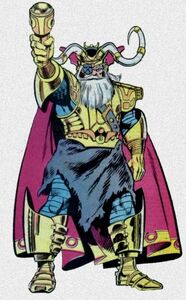 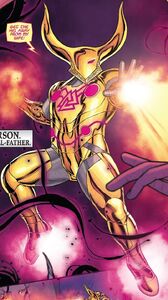 Odin in his Iron-All-Father Armor. 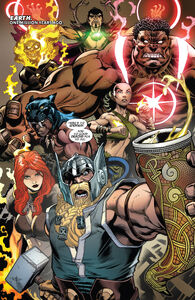 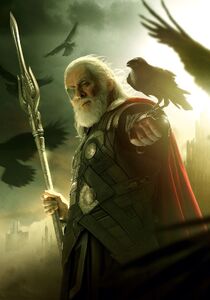 Anthony Hopkins as Odin in the MCU. 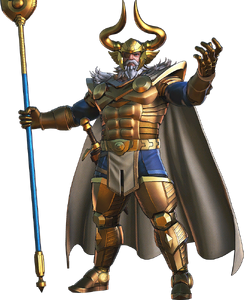