Ancient Greece, The Odyssey, The Iliad

Odysseus also called Ulysses, is a character in Homer's epic poems The Iliad and The Odyssey. Odysseus was one of the Greek kings called to arms against the Trojans during the Trojan War. The Iliad focuses on the war itself, of which Odysseus is an instrumental player towards victory. The Odyssey on the other hand is about Odysseus and his crew specifically and their attempts to sail home home across a sea of fierce monsters and disgruntled demigods.

During the Trojan War, Odysseus was one of the greatest heroes in the Greek army (alongside his allies Achilles and Diomedes). Odysseus acts as the voice of reason for Achilles though-out their adventures together.

When an ally named Patroclus is killed by the Trojans, Achilles suggest they go back and slay all the enemy soldiers as a form of revenge for the death of their friend. Odysseus however convinces his heartbroken and enraged comrade by suggested that they avoid that offensive and instead rest and regain their energy, implying that such an offensive would be suicide. Achilles reluctantly, but morally agrees.

Odysseus's biggest adventure occurred sometime after the Trojan War. After becoming King of Ithaca, Odysseus, alongside a crew of men set out on journey that would end up lasting for 20 years, with only Odysseus becoming the sole survivor, before returning to reclaim his rightful place as the King of Ithaca.

The journey starts out rocky, but Athena, the Goddess of Wisdom, as well as Hermes, the Messenger of the Gods, voices support to help guide Odysseus back home, and agree to help Odysseus in the obstacles he encounters along the way.

One the first islands Odysseus and his crew come across is the island of the Lotus-Eaters, strange, lethargic individuals who attempt to prevent Odysseus from continuing his quest by feeding him and his men lotus flowers, in an attempt to forget. The crew eventually learns of this sinister scheme, and overcomes it before continuing on their quest.

Eventually, Odysseus and his crew make it to yet another island and encounter yet another obstacle, when they are captured by the Cyclops Polyphemus, who eats several of his men in the process. Odysseus devises a cunning plan by disguising his name as "Nobody" when the Cyclops asks him who he is before feinting a mutual relationship, before intoxicating him with a barrel of wine, causing him to fall asleep and igniting another, causing the cyclops to go blind. This alerts the other cyclops, who ask what's wrong, before openly stating "Nobody has blinded me", causing the other cyclopsi to think Polyphemus is going mad.

Odysseus and his men escape, only for him to unintentionally reveal his real name to the Cyclops, who reveals that his father is Poseidon, the God of the Sea, and calls for him to punish Odysseus for his deception. Poseidon (though the personification of the sea) later openly states to Odysseus that as long as he travels by sea, he will never return home to Ithaca.

Aeolus, the Bag of Winds, and the Laestrygonians

With Poseidon's curse, Odysseus and his remaining crew are driven off course from there journey, seemingly lost in the open sea. They eventually find a third island where Aeolus, the master of the winds, resides. Odysseus and his crew find temporary sanctuary on the island, and before they leave, Aeolus gives Odysseus a bag that traps all the winds except for the winds of the west (the direction where Ithaca is located), that way Odysseus can counter Poseidon's curse return safely to Ithaca without further incident. Aeolus however warns Odysseus not to open the bag until after he reaches his destination, or else the winds will blow them off course once more.

Unfortunately, Odysseus's crew was not present when the bag is given to Odysseus, and while he is asleep, they foolishly open the bag, believing that it contains gold that their leader was stubbornly hiding from them, causing all their ships to return lost in the sea once more.

Odysseus returns to Aelous's island, but unfortunately, the master of winds is unable to help him again, disappointed, Odysseus and his men continue on there journey, where they make there way to the island of the Laestrygonians, a cannibalistic tribe who captures and eats several of Odysseus's men. Odysseus and his remaining crew narrowly, escape, but are left with only the flagship was their sole vessel.

Circe, Tiresias, and the Land of the Dead

Eventually, Odysseus and his remaining crew make it to the island of the witch Circe, who seduces half of his men with cheese and wine, before turning them into pigs. Odysseus learns of this, and makes his way to confront the witch. Hermes gives him a herb called moly, which makes him resistant to Circe's magic, and after outsmarting the witch, Circe falls in love with Odysseus and agrees to turn his men back to normal.

A year passes, before Odysseus decides he much leave to continue on his journey. Circe instructs him to travel to the western edge of the world, where he will enter a portal into the Underworld. Odysseus travels there, and speaks to the deceased, blind prophet Tiresias for advice, who reveals what one of the next obstacles he will come across: a narrow strait between the six-headed, hydra-like monster Scylla and the whirlpool Charybdis, where he advises to sail closer to the former to avoid losing his and all of his crew's lives.

Odysseus sails in the direction Tiresias instructed him to travel, where his men encounter a group of Sirens, mermaid/harpy-like women trying to lure his ship to crash into the treacherous coves and kill Odysseus and his crew. Odysseus counters their powers by stuffing wax into his crew's ears, effectively passing by the sirens without incident.

They eventually reach the strait between the hydra-like monster Scylla and the whirlpool Charybdis. Odysseus takes Tiresais's advice and sails closer to Scylla to avoid being engulfed by Charybdis., however Scylla uses her six heads to snatch and kill six of his crew respectively.

The Scared Cattle of Helios

Eventually, the crew makes it to the island of Thrinacia. Ignoring advice from Tiresais, Odysseus and his crew slay the scared cattle located on the island as a means to obtain food. This action however angers the sun god Helios, to orders Zeus to swiftly punish Odysseus and his men, threatening to bring the sun to the Underworld if he refuses. Zeus agrees to Helios demand, and shortly after Odysseus leaves the island, the King of the gods summons a violent thunderstorm that causes Odysseus's remaining ship to crash and sink, drowning all of Odysseus's remaining men, and leaving Odysseus himself as the sole survivor.

Phaeacians and Return to Ithaca

After leaving the island of Ogyigia, Odysseus finds himself shipwrecked in an unknown location. He is soon befriended by the Phaeacians, led by King Alcinous, who agrees to help Odysseus return to Ithaca in exchange for him telling theking and his people his tales about his journey.

After finishing his story, the Phaeacians return Odysseus to Ithaca at night while he is asleep, while hidden in the kingdom, he befriends his old friend Eumaeus and his son Telemachus and Athena disguises himself as a beggar to help him learn how things have changed while he had been away, whilst avoiding him from drawing attention.

Jealous Suitors, Stringing the Bow, and Reclaiming the Throne

Odysseus learns that while away, his wife Penelope has began looking for a new suitor to replace Odysseus. He overhears her announce a contest to string Odysseus's old bow and shoot an arrow through twelve axe shafts, in which whoever wins, will become Penelope's new husband (and effectively the new King of Ithaca), after hearing this, Odysseus plots to make plans win the contest and reveal his presence. His disguise is nearly blown in the process by the servant Eurycleia, but after threatening to kill her if she reveals his identity to the public, Eurycleia agrees to keep him a secret until the time comes.

On the day of the contest, none of the suitors are able to string the bow. A disguised Odysseus then steps forward and asks to participate; despite protests from the suitors, Penelope agrees to allow "the stranger" to participate. Odysseus easily bests the suitors and successfully string the bow and shoots the arrow through all twelve shafts. Afterwards, he and Telemachus (as well as his loyal servants Eumaeus and Philoetius) proceed to slaughter all the suitors. Afterwards, Odysseus reveals his true identity and says that he has returned.

Penelope initially does not believe Odysseus, think that he is one of the gods in disguise, and tries to prove if he is Odysseus or not by ordering Eurycleia to move her bed to the potential wedding chamber. Odysseus then states that such an action is impossible by pointing out one minor detail about the bed (which he knows he made himself): that one of the legs is part of a living olive tree. Knowing that only her husband is capable of knowing such knowledge, and now becomes convinced that the man really is Odysseus. The two then fall in love once more, as Odysseus officially reclaiming his rightful position as King of Ithaca.

The following day, Odysseus and hisson Telemachus travel to his late father's country farm, where they are followed by the angry citizens of Ithaca who plan on killing Odysseus (and to an extant Telemachus) for killing the suitors (who are in fact many of the villager's sons). Athena then appears and convinces the villagers to reconcile with the king, to which they relent. 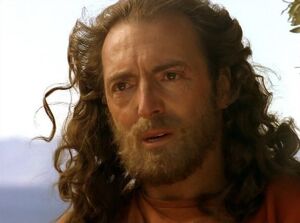 Odysseus as played by Armand Assante in The 1997 The Odyssey 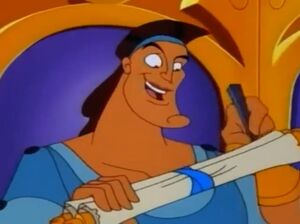 Odysseus as seen in Dinsey's Hercules the series. 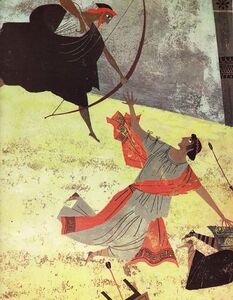