Help Agent 8, Agent 3, and Cap'n Cuttlefish go into the surface.

Off the Hook, or Pearl and Marina are the secondary protagonists of Splatoon 2, the sequel to the video game Splatoon. They are also set to reappear in Splatoon 3 with a new band they formed some time after the Final Splatfest in Splatoon 2, Chaos vs Order.

Pearl is a female Inkling with a mask similar to Callie's of the Squid Sisters, a dress with a zipper, and a crown that changes color like her hair. She also wears pink tights, white shorts under her dress and white boots. Pearl has gold eyes that also has a similar eye design with the Squid Sisters as well. Marina is an Octoling with the color cyan at the end of her tentacles and her tights, wears headphones, a short black tank top, black shorts, and black boots. Marina's eyes have pale green pupils along with a pinkish line with circles at the end of the lines. Their clothes sport large zippers that are styled after their eyes: A plus symbol for Pearl and an infinity symbol for Marina.

In the Octo Expansion, Pearl wears a sweater dress with a necklace, white shoes, and a gold, jewel-encrusted crown. Marina wears a white bandana on her head, a white tank top, jeans, shoes, and a necklace as well. Their necklaces are designed around their eyes like the zippers on their regular outfits from their studio in Inkopolis Square.

Pearl acts much like Callie, whereas Pearl has a tomboyish attitude and has angry-like eyelashes. Marina acts like Marie, however, Marina smiles a lot and has sad eyelashes. In most of the game during the news, Marina refers to Pearl as "Pearlie", implying that they are in some sort of relationship between each other. It's been also shown at the end of the main campaign mode that they have a friendly rivalry with the Squid Sisters as both of them are idols in Inkopolis.

As revealed in some Sunken Scrolls, both of them had certain backstories. One Scroll reveals that when Pearl was young and singing at a local festival, she caused a very loud noise, but fortunately no one was hurt. Marina was revealed to be a member of the Octolings serving under DJ Octavio, leader of the Octarians, but for some unknown reason, she left implying that she was inspired by the Squid Sisters' performance in the first Splatoon to become a singing idol.

In the Octo Expansion, Pearl and Marina are contacted by Cap'n Cuttlefish (in the latter on accident), and they help out with Agent 8 on his/her tests. Later, Pearl and Marina start a chat room, with Cuttlefish not knowing how to correctly type in. At about half of the game, when Agent 8 and Cuttlefish got off of the train, Commander Tartar ambushes the two by putting them in a blender. Marina tried to hack Tartar to free Agent 8 and Cuttlefish, but to no avail. Luckily, Agent 3 (gender determined post-game), stops Tartar by crashing in and breaks the blender after responding to the distress beacon Marina activated on Agent 8's CQ-80.

After Agent 8 defeats and frees Agent 3 from Tartar's brainwashing, the two, along with Cuttlefish, are next seen outside the train. Pearl and Marina are seen flying in with a fleet of helicopters led by their dual top rotor chopper and offer the three a ride to Inkopolis. While Pearl is rapping with Cuttlefish, the head of a statue rises up, and Commander Tartar reveals his plan to wipe out Inkopolis out of disgust at what it saw with the Inklings and Octarians, believing neither of them are worthy of the vast knowledge of humanity it had been entrusted with. Marina then tells Agent 8 to cover the statue with as much ink as they can using her prototype hyperbombs. When Agent 8 was done inking the statue, Pearl did the final blow by using her custom Killer Wail, the Princess Cannon, and screamed as loud as she can, thus defeating Tartar once and for all, saving Inkopolis from certain destruction. 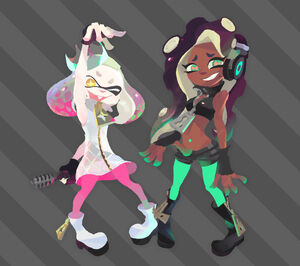 2D artwork of the two 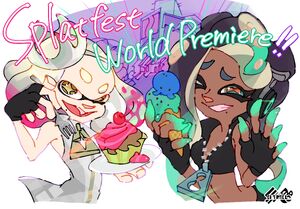 Pearl and Marina in the Splatfest World Premiere artwork 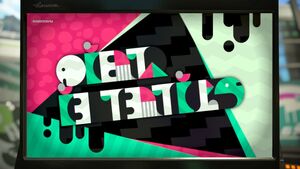 Their intro before the game starts 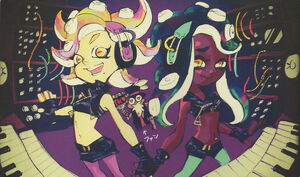 Concept art of Off the Hook. Note that Pearl is an Octoling instead of an Inkling. 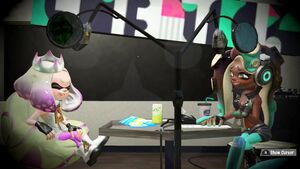 Pearl and Marina chatting in their studio 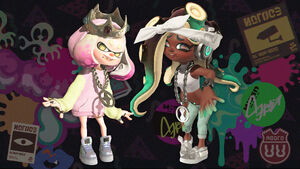 Off the Hook in the Octo Expansion 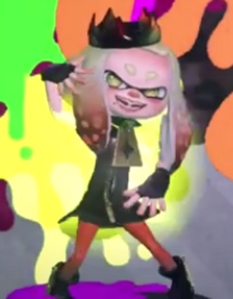 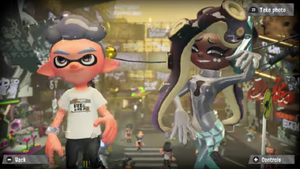