Training.
Spending time with her friends.

To protect the homeland from evil threats.

Amazon
Izumo no Okuni (Japanese: 出雲 阿国) is a heroine in the Samurai Warriors series. She is an entertainer who is best known in history for founding the Japanese dance style, Kabuki.

Okuni unknowingly squatted on the battlefield. As a priestess, he usually tried to stop violence or raise funds through dancing. She helped Goemon to start her story by quarreling in Kyōto. In the city, she met Cage and fell in love. After leaving Kyōto, she resumed her mission to raise funds for the Izumo shrine. She came to Osaka just to find an attack by the Oda forces. In order to enhance people's spirit, she performed dance and caught the attention of Magoichi. With the help of Goemon, she defeated the mercenary and defeated Oda. In recent works, she is implied as a certain spirit. The forces scattered in Osaka led the pair to become fugitives as Mitsuhide pursues them to avenge the losses.

They are escape to Ise and fled the Iga passage, and Goemon eventually voluntarily to stayed Mitsuhide. She continued without him, arrived at Kawanakajima, and stumbled upon Shingen and Kenshin. She danced to entertain two warlords, but ultimately did not stop them from fighting. After the performance, Okuni collected enough funds to repair the Izumo Shrine and decided to go home. However, before returning, she visited Azuchi Castle and reunited with Keiji to "save" Goemon's annoyance. Although she is obsessed with Keiji, in her story, Okuni wears her sleeves and can be fascinated by all kinds of men and women.

She often hopes that the person she is obsessed with her back to Izumo. She entertained Keiji and Goemon with dance. During the performance, when she wanted to return to the battlefield, her emotional image came out. When she finished, she and Goemon were looking for the missing Keiji. Okuni is loyal to to her priestess duties, she will lead the souls of those who are scheduled to die and give them peace. As for their insistence on performing individual duties on a realistic plane, she hopes that they will enjoy their own lives and help them release. At that time, she allowed to help Nagamasa of Odani Castle and Motonari of Kizugawaguchi.

Between the latter conflicts, she felt that Hanbei had one of the most serious illnesses, reminding herself to admission and take him away. Her memory is good enough when she should not be commensurate with others, they were promised to accept the stangible, Terumoto was still able to refuse to hand over his grandfather to her and ordered Okuni to die. Even with his opinions, Okuni's proposal to teach his history eventually made Motonari win, he could even help her during the collection of the soul when she felt was in need of peace. Okuni is practicing dancing while the dancers are dealing with the island god on the battlefield, taking out the soul of the entire dead in any place and then have the ability to think about them. 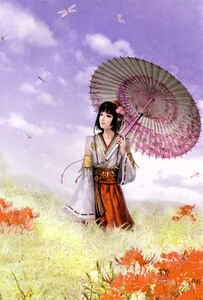 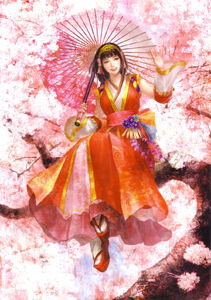 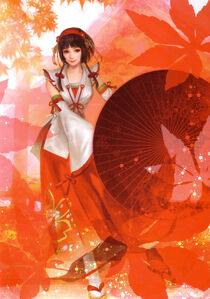 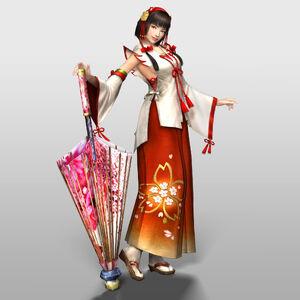 Okuni in Samurai Warriors 4.
Add a photo to this gallery

Retrieved from "https://hero.fandom.com/wiki/Okuni_(Koei)?oldid=1755290"
Community content is available under CC-BY-SA unless otherwise noted.