Okuyasu Nijimura is a side character and ally featured in Jojo's Bizarre Adventure: Diamond is Unbreakable.

During his childhood, Okuyasu's mother passed away. His father became abusive and bancrupt, resulting in him and his brother suffering. One day however, his father somehow gained a lot of money and their lives began to get better. A few years later, his father suddenly mutated and it is revealed that his father was a servant of Dio and it was the reason his father received such riches.

Okuyasu's first appearance was during the first few episodes of the part. He was first seen closing his house's gate on Koichi's neck, trapping him there and allowing his brother to impale Koichi with The Arrow. Okuyasu tries to fight off Josuke despite facing criticism and mockery from both his brother and his opponent. The fight ended with him pulling in a flower pot which hits his own face, knocking him out. Upon getting up and attempting to attack Josuke again, he is accidentally shot by his brother's stand. Luckily Josuke decides to heal him and explain the reason for doing so. As a response, he decides to help Josuke retrieve an unconscious Koichi before leaving his house. He returns to his house and meets up with his brother, only to immediately have him taken away by Red Hot Chili Pepper, an enemy stand. The next day, he stops by to visit Josuke's house and from there he is a part of the main cast.

He is with the group during the hunt for Red Hot Chili Pepper and was the first to fight off the enemy stand. After beating it however, he was goaded into attacking it, resulting in his hand being cut off and him being dragged into a power line. Luckily Josuke was able to save him by using his stand to restore him back to his hand. He ends up joining Jotaro by boat, getting a chance to see senile Joseph. He was almost tricked by Akira, Red Hot Chili Pepper's stand user, into attacking an employee but he was able to figure it out by just punching both of them.

Another time he joined Josuke and suggested they visit a new Italian restaurant that had just opened. Despite the owner's strange behavior, he still decides to order some food. This results in a variety of effects such as his eyes crying out large amounts of water, his skin peeling off his shoulder, his rotten teeth getting launched out of his mouth and ending with his intestines exploding out of his abdomen. Despite this, all of these conditions receded and he turned back to normal with his ailnesses cured.

He and Josuke decided to investigate the house of Rohan Kishibe upon noticing their friend Koichi's strange behavior. He enters through the window, only to be affected by the mangaka's stand. Rohan proceeds to threaten and intimidate him and Koichi before using his stand to force Okuyasu to burn himself. Luckily Josuke manages to save the two by beating up Rohan. This is where Okuyasu learns about the reason behind Josuke's uncontrollable anger upon having his hair insulted.

While Josuke was short on cash, Okuyasu is called to help him out. The two befriended a short stand user named Shigechi and his stand Harvest. While examining the many objects Harvest collected, Okuyasu discovers a lottery ticket which had won one of the prizes. This ends badly when Shigechi steals the ticket and attempts to run off, ending up on a roof which the teenagers were able to climb. Upon arriving however, they were incapacitated by Harvest. Okuyasu however was able to use his stand to swipe the ticket right out of Shigechi's hands, allowing Josuke to trick him into calling off his stand. In the end, the 3 were able to split the money with minimum quarreling.

Okuyasu had joined the main cast while looking for information regarding a serial killer. They entered a house, only to be locked in by a stand. Okuyasu was told to break the windows, only to hit a barrier and hurting himself. Luckily Jotaro was able to counter the enemy stand and they were able to exit the house. Some time later, he and Josuke discovered a teenager who appeared to be an alien. He decides to leave for a while after the two learned of the alien's stand. He returns when Josuke decides to investigate a transmission tower which turned out to be an enemy stand. He and Josuke decide to attack it and the two learned that it could reflect damage. He was unfortunately incapacitated by the reflection, leaving Josuke on his own.

During the final battle, he attempted to keep Josuke away from Killer Queen's hand, unaware of Stray Cat's ability. This results in him getting severely injured by an explosive air bubble which launches him towards a fence. Despite Kira's constant taunting, he was dragged by Josuke and left in a house. Later while an explosive air bubble was approaching Josuke, Okuyasu was revealed to be alive and used his stand to erase the air bubble. He explains that the reason for his revival was because he decided that he would rather be alive than dead due to his brother's advice. He then used his stand to pull Stray Cat right out of Killer Queen, putting Kira at a disadvantage which ultimately led to his demise. Okuyasu appears one last time when Reimi ascends to heaven.

Okuyasu Nijimura is an impulsive and violent youth with a good heart nonetheless.

The word that describes Okuyasu the best could be "childish", as he possesses several traits hinting to a certain immaturity. Okuyasu is a very extroverted and impulsive man, acting by his own words "with his heart". He consistently shows his emotions, which are more extreme than for the average individual, being ecstatic when he is happy, in tears when he is sad, and enraged when angry. Okuyasu frequently acts out of impulses, and rarely takes the time to observe or reflect in a fruitful manner.

Okuyasu has been known to be "not good at making decisions" and being generally dimwitted, although he has moments of genuine ingenuity. Constant reliance on his big brother Keicho Nijimura and belittling from him made Okuyasu unable to take decisions that do not come out of instinct and is self-conscious about this limitation. This results in him repeatedly and openly stating his lack of intelligence. His inability to think was exploited on three occasions, and during all he was easily psyched out by his opponent. However, Okuyasu eventually grows out of it: at the end of the part, when Okuyasu was hanging between life and death, he took the decision to live and saved Josuke.

Okuyasu is a very curious person, showing deep interest in any new sight, which has lead him toward Tonio Trussardi's restaurant or a crop circle where Mikitaka Hazekura rested. This curiosity extends to having an habit to try to learn the bottom line of anything, notably asking Josuke persistently why he helped heal his wounds when Keicho shot them both and why he couldn't heal his own wounds, which is one of the reasons why he has such difficulties at making decisions when opponents try to manipulate him.

Okuyasu also possesses a confrontational and violent side, possibly due to his abusive childhood. On top of being foul-mouthed, he regularly issues threats to those that anger him, and has on several occasions hit people out of pure anger, notably Tamami Kobayashi and Shigekiyo Yangu. In battle, Okuyasu is very aggressive and has little qualm using The Hand to lethal goals, although he seldom succeeds in hurting anyone but himself. After Akira Otoishi and Yoshikage Kira murder his brother Keicho and friend Shigekiyo, respectively, Okuyasu shows a desire for vengeance. In fact, Okuyasu is noticeably more serious and cold during these moments of rage, a fact which make him frightening to those around him. When he first meets Mikitaka, he quickly gets annoyed with him and keeps asking Josuke if he should punch him or kick his ass, with Josuke frequently telling him to calm down.

Okuyasu possesses a truly kind and honorable side, first visible after Josuke healed his wounds; he then helped Josuke save Koichi and tried to reason with his brother over no longer using the Bow and Arrow. He regularly shows great care for his friends and family, caring for his father and tried to end his misery. Though when he learned his father had some humanity left in him, Okuyasu tried to convince his brother to find a way to at least restore their father's memories and personality rather than try to end him. Later on, Okuyasu is never shown hesitating to help a friend in need, notably saving Koichi from many tight spots and helping Josuke throughout his many battles. In addition, despite his confrontational personality, he has been shown to have a good understanding of morality. Okuyasu knew full well his older brother Keicho did a number of awful crimes and despite loving him, he understood that he would be killed by someone someday and deserved to die because his crimes would catch up with him.

Okuyasu regularly laments that he doesn't have a girlfriend, being disappointed not to have lived 15 years ago so he would know Reimi Sugimoto, and being mildly jealous of Koichi's relationship with Yukako Yamagishi.

He is also mildly stingy, refusing to share his food with Josuke in the Let's Go Out for Italian arc or lend Josuke money after hearing about how his mother froze his account. In addition, it is implied he is conservative with his money as he tells Josuke after they excitedly win the lottery that he is putting it in savings. He currently only has five to six years of savings which he is living off of.

On a side note, he likes Italian stuff and hates spicy food, preferring curry with honey and apples. He also likes choco strawberry cone flavored ice cream. In addition, he cooks at home for his father and him, as stated in Let's Go Italian arc chapter 1.

Okuyasu's Stand, The Hand, "cuts" out or "scrapes away" space and replaces it with redistributed neighboring space, or simply eradicates it. Its ability can also be limited to physical substance removal without outright eliminating the affected space, as seen in a few occasions, functioning identically to Cream's void. 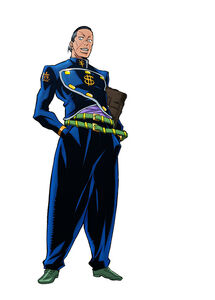 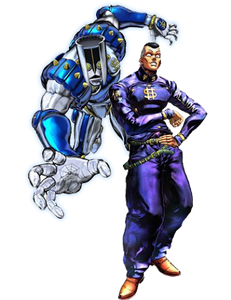 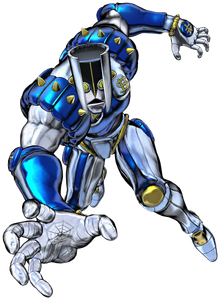 Add a photo to this gallery
Retrieved from "https://hero.fandom.com/wiki/Okuyasu_Nijimura?oldid=2305479"
Community content is available under CC-BY-SA unless otherwise noted.