To train Robbie for The Reindeer Games (in Hooves of Fire, succeeded)
To run North Pole Holidays (in Legend of the Lost Tribe, formerly)
To contact the Earth Guardians (in Close Encounters of The Herd Kind, succeeded)

Old Jingle is a friend of Robbie's and the secondary tritagonist of the Robbie the Reindeer films. He is an elderly reindeer who trained Robbie so he was fit enough to take part in The Reindeer Games and later became a good friend of his.

He is voiced by Harry Enfield in the original British version and the late Jerry Stiller (who also voiced Uncle Max) in the American redub.

Role in the Robbie the Reindeer films

Old Jingle first appears when Robbie and Donner come to his house on Pointy Mountain to ask him to train Robbie for The Reindeer Games to get on The Sleigh Team. At first, Jingle turns down the offer, saying that he has retired, but changes his mind when Donner says that they need to stop Blitzen (despite the fact that Jingle has never heard of him). After sliding his house down to the bottom of Pointy Mountain, Jingle tells Robbie that if he wants to be on The Sleigh Team, then he must take part in The Steeplechase.

Jingle with help from Donner, trains Robbie and teaches him The Nose Jump. After months of training, Robbie is ready to take part in The Reindeer Games and thanks Jingle. At first, Jingle likes his house being at the bottom of Pointy Mountain, but later decides to move it back to the top, but the house slides back down the mountain and traps Jingle underneath it. The Head Elf goes to The Reindeer Games just before the start of The Steeplechase to tell Robbie what has happened. Robbie abandons the race to save Jingle and succeeds by using two toys he made called OctoMonkey and Sebastian Muscle Whale. It seems that Jingle has died from his injuries, which saddens Robbie, but he then realizes that he is alive and has fallen asleep. After waking up, Jingle to Robbie to return to the race.

Jingle and The Head Elf later watch Robbie taking part in The Steeplechase, but sees him being knocked down by Blitzen. Jingle then says for Robbie to use The Nose Jump to catch up with Blitzen. After Robbie is made winner by default of The Steeplechase following Blitzen's arrest, Jingle in joy proposes to The Head Elf who accepts.

Legend of the Lost Tribe

Three years later, Jingle is seen with the other reindeer working for North Pole Holidays, using Reindeer Lodge as an office and telling a caller that he will send them an email to which he types the message into his computer, before picking it up and asking if anyone is going to The Post Office.

Later that day, Jingle is seen in sitting on a sofa near Reindeer Lodge's fireplace, using one of his antlers as firewood. Robbie then comes over to him and talks to him about Vinkings to which Jingle says that there are no Vikings left and also tells Robbie that when he was younger, he served as beard trimmer to the Vinkings and says that the Vikings killed each other after there were no more enemies to fight. After finishing the story, Jingle says that if a Vinking rang the doorbell, he would gladly eat the sofa, just before the doorbell actually rings, which makes Jingle decide to look for ketchup. However, it is shown that it wasn't a Viking that rang the doorbell, but in fact Blitzen who has been released from prison on good behaviour and says that he is sorry for what he did. However, the other reindeer don't agree and throw him out, but after he says he can help them with North Pole Holidays, they let him stay.

Jingle helps the reindeer in building a luxury hotel from Blitzen's blueprints. After the hotel is built, Blitzen says they should hold a champagne reception for their guest, an Internet billionaire rabbit named Warren Hutch and says that there's champagne in the hotel's lobby. However, when the reindeer go inside, Blitzen presses a button and traps them inside the hotel and declares that he along with Warren (revealed to be a master of disguise named Long Eared Jack) that he is going to build an attraction called "Blitzen's Reindeer World", which the tourists will love more than North Pole Holidays.

After the trio's recapture, Jingle along with Donner, Prancer and the other reindeer (except Robbie) have mind control hats placed on them that turns them into robots and are placed into "Blitzen's Reindeer World". However, the last remaining Viking tribe (all called Magnus) arrive and free Robbie who then removes the mind control hats off Jingle and the other reindeer before going after Blitzen. Jingle later aids the Vikings in fighting the Rabbit Thugs.

After Blitzen's defeat and Robbie and Donner get engaged, Jingle is last seen dancing at Prancer and the Vikings' party at the remains of "Blitzen's Reindeer World".

Close Encounters of the Herd Kind

Set some amount of time after Legend of the Lost Tribe, Jingle attends Robbie and Donner's wedding where he walks Donner down the aisle with Donner's sister Em (though at first, he exits Reindeer Lodge with Donner, thinking they were going to to the shops before going back inside and apologising). Jingle then witnesses Robbie run out of Reindeer Lodge after hearing a voice tell him that he's in grave danger and that it's the end of the world. Not taking in what just happened, Jingle asks "Didn't that go well?" before raising a glass.

The quartet find Gariiiiiii's ship which Robbie uses to travel to the Nargathrons ship to save Donner, but not before giving Jingle, Prancer and Tapir the crystal and tells them to try and contact The Earth Guardians. The trio try and fail to contact the Earth Guardians with free food and return to Reindeer Lodge, where they find Em (who reveals to them that she works for a secret government agency that monitors alien life on Earth) and the guests trying to contact the Earth Guardians by using the wedding cake and organ to send out a signal, but it is not strong enough. The Nargathrons arrive and try to get inside Reindeer Lodge to get the crystal, which Em uses to create a bigger signal, before the Nargathrons get in and takes everyone inside hostage and send the crystal to Vorkana.

At the reception, Em admits her love for Prancer (who had a crush on her when he met her at the start of the film) and goes off to dance with him to which Jingle tells the Nargathrons' Computer that he always knew that Prancer and Em were meant for each other. 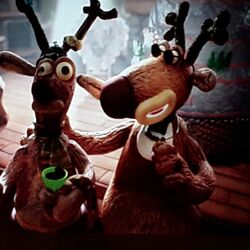