Oliver is the main protagonist of the video game, Ni no Kuni: Wrath of the White Witch.

He is a young boy who lost his mother, Allie, after she saved his life from almost being drowned while testing a new vehicle designed by his friend, Philip. After Drippy comes back to life, Oliver is on a journey to the other world to save his mother and stop Shadar.

Oliver is a kind-hearted, nice, and polite. In the English version, he addresses royalty by their respective titles (an example is calling King Tom XIV/Nyandal his "Meowjesty"), in the NDS version he addresses royalty just as any other character does (meaning if everyone in town calls him "King", so does Oliver). In the Japanese version, he speaks less dialectically than Shizune/Drippy.

Oliver has a strong sense of justice. He believes that while the world may be flawed, it is still a place where many people strive for the greater good. As seen in various points of the game, he is trusting and nice to strangers, even if they have wronged him once before. His personality is what causes many characters in the game to trust and help him.

Thanks to the magic book known as The Wizard's Companion/Magic Master, Oliver can use magic spells both in and outside of battle. Due to one spell, he can summon familiars/imagines to help him on adventures. He can also use his wand as a melee weapon, though it does very little damage compared to his spells.

His Miracle Move is Burning Heart. The most potent "ability" of all, however, stressed through the game, is his courage, determination, and nice nature.

During his initial appearance in the game, Oliver wore a yellow shirt, blue trousers, and light red socks and blue and white shoes. Upon reaching the first town in the second/parallel world, he obtains a new set of clothing which is a blue vest over a white shirt, white pants, and red cape. In Castaway Cove, he obtains red swim trunks.

He also wears the locket that is able to hold parts of people's hearts around his neck along with almost every outfit excluding his Motorville clothes. 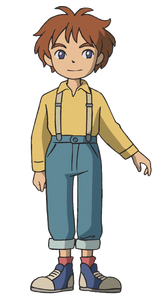 Oliver in his Motorville clothes. 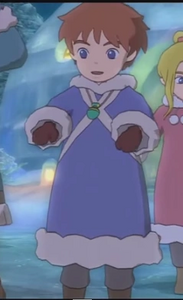 Retrieved from "https://hero.fandom.com/wiki/Oliver_(Ni_no_Kuni)?oldid=1605442"
Community content is available under CC-BY-SA unless otherwise noted.