Being with Chloe Sullivan

Oliver Jonas Queen is a billionaire owner and CEO of Queen Industries, the founder of the Justice League, and a vigilante archer under the codename Green Arrow. As Green Arrow, Oliver dresses in green and black and utilizes a variety of arrows and gadgets for many forms of defense.

He was portrayed by Justin Hartley.

Oliver had a near lifelong relationship with Lex Luthor which began with their parents' Veritas meetings and continued into their time together at boarding school. He also has a complicated romantic history with Tess Mercer.

When Oliver descended into depression after learning that Lionel Luthor killed his parents, he turned towards a lifestyle of women, drinking, and partying. He then again abandoned his Green Arrow duties and spent many months making the gossip pages. He eventually decided to get his life back on track, thanks to Chloe Sullivan's intervention.

In 2009, Oliver Queen agreed to merge Queen Industries with LuthorCorp after Tess Mercer, CEO of LuthorCorp, suggested it to Oliver after her betrayal by Lex Luthor. However, the day he was to discuss the merger with the LuthorCorp Board of Directors, every member was killed in an explosion. He and Tess follow through on the $10 billion merger and become full business partners. The details of the merger were never given to the audience except the $10 billion amount and that Tess and Oliver shared all of their assets after the merger: airplanes, stocks, etc. It is therefore unclear how much influence or stake Oliver currently holds in the company because of Lex taking back control of LuthorCorp, which he renamed LexCorp. It is revealed in Guardian, that Oliver is currently rebuilding Queen Industries.

In late 2009, Oliver discovered a prostitute and street fighter named Mia Dearden. Seeing her fighting skills, Oliver took her under his wing and got her off the streets, training her in martial arts with the hope that she could be an ally for his team of superheroes.

Recently, due to the frequent bad press about costumed heroes being deemed menaces, and the loss of his true love Chloe, Oliver revealed to the public that he is the Green Arrow to prove the media wrong and hopefully be reunited with the woman he loves. 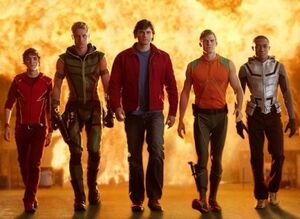 The Justice League.
Add a photo to this gallery
Retrieved from "https://hero.fandom.com/wiki/Oliver_Queen_(Smallville)?oldid=1866980"
Community content is available under CC-BY-SA unless otherwise noted.