Possessing a lawn mower to go on little rides.

Help Geo to stop Gemini from getting the Andromeda Key (succeeded).

Help Geo to protect and save Earth (succeeded).

Omega-Xis, (Warrock in Japan), nicknamed Mega (Rock in Japan), is the deuteragonist in the Mega Man Star Force series. Prior to meeting Geo Stelar he had fled from Planet FM after stealing the Andromeda Key, and for a time inhabited Geo's Transer. Currently he exists as Geo's Wizard in his Hunter-VG.

He was voiced by Kentaro Ito in the Japanese version and Kyle Hebert in the English version in the anime.

Omega-Xis appeared while Geo was looking at the stars at Vista Point. Then Omega-Xis, or "Mega," introduced himself, after Geo stopped gawking at the "Milky Way" EM roads. Omega-Xis seemed to know Geo's name, and that got Geo interested. Before Geo could ask any questions, however, a train (that Geo dubs "not supposed to move") starts to move. Omega-Xis explains that EM viruses came from the Planet FM, his former home planet, and are trying to get him. He then teaches Geo how to defeat the EM viruses.

Omega-Xis decided to stick around Geo, due to Geo catching his interest because he "did better than he expected." Geo refused, mainly because he didn't want to fight the EM viruses again, but Omega-Xis uses info on his father as blackmail to freeload on his Transer.

Omega-Xis influenced Geo, and Geo influenced him, which caused the two to learn the value of friendship and courage to stand up to the FM-ians. However, after the incident with Gemini Spark, Geo returned to his depressed attitude before he met Omega-Xis. Omega-Xis got sick of it and left to fight the revived FM-ians, with help from Harp Note, although he lost and the Andromeda Key was taken away from him.

He and Geo reunited, and Geo returned to his old self, now willing to make BrotherBands once more. They both went to space, with Aaron Boreal's help, and defeated the FM-ians once more. Omega-Xis then tells Geo the truth about what happened at his father's space station.

The two, after defeating the FM-ians, went on to face the FM king, Cepheus. It is revealed there that Omega-Xis is actually an AM-ian, and he knew it all along. Cepheus sends Andromeda after the duo, who, after an exhausting fight, defeat it. However, Geo suffers too much damage because of the fight and the EM Wave radiation from the FM king, and Andromeda reawakened. However, Andromeda goes berserk, and thanks to the BrotherBand Geo held with his friends, defeated it once and for all.

After the fight, it was revealed that Gemini manipulated the king into destroying the AM planet, and that Cepheus was lonely all the time, because of others trying to take his throne. Geo felt bad for him and they became friends, and Omega-Xis forgave the king.

Omega-Xis takes more of a back-seat role, due to his unfamiliarity with the Mu civilization, but he still continues to aid Geo, turning the two into Mega Man and offering help and advice as needed. The two months since the last game haven't changed his personality at all.

During the events at the IFL Tower's museum, as Rogue attempted to steal all the artifacts, Omega-Xis latched on to the OOPArt with his teeth to keep it from being swallowed by a warp. When Harp Note blasted the warp device, the OOPArt fell into Omega-Xis' mouth and he inadvertently ending up swallowing it. As a result, both he and Geo were occasionally struck by intense moments of pain from the residual EM spirits of the OOPArt's tribe, attempting to reclaim their bodies and rebuild their tribe. The two held on long enough until Luna gave Geo her support, strengthening their BrotherBand and giving Mega Man enough power to control the OOPArt, allowing them to use Tribe On.

Later, after Mega Man defeats Rogue and his Indie Fragment, Dark Phantom appears and rips the OOPArt out of Omega-Xis to take it to Dr. Vega. Luckily, Omega-Xis still had enough of its power to use Tribe On until the end of the game, where the OOPArt was lost to the bottom of the sea, probably never to be seen again, being buried under the entire Mu continent.

A personal grudge of Omega-Xis' comes into play when Geo discovers the true identities of Jack and Ms. Tia as Dealer members. Their Wizards, Virgo and Corvus, happen to be the most dangerous criminals of Planet FM, responsible for destroying whole planets. Omega-Xis used to engage in battle with them, but was never successful. As the player engages in the extra storyline, Corvus shows up and proceeds to tease Omega-Xis, constantly calling him "Little Mega", which in effect causes Omega-Xis to take on a somewhat helpless state. Because of this, it is quite possible that Corvus was a bully to Omega-Xis, going as far as bullying him since he arrived on Planet FM.

Omega-Xis also develops a rivalry with Acid when he shows him up early on during an incident at Spica Mall. He wanted to prove himself as being stronger than Acid. Acid, however, sees it more as a one-way rivalry and doesn't really respond to Omega-Xis' bolstering.

Omega-Xis also gets really mad when Geo and him show up at WAZA headquarters to find the area being attacked by Omega-Xis copies, which come in bright red, yellow, green, and gray colors. He assists Geo then by swiping at them as they come near with his claws. He gets really irritated that the clones of him are not strong like he is at all, and this anger might drive his strength during this part of the game.

He also gets easily jealous when Acid compliments Geo on a few instances, and also over-reacts at one point when they are invading Dealers base, and Acid wishes Geo good luck, but not Omega-Xis.

At the end of the game, Omega-Xis and Kelvin Stelar work together to send Geo back home, telling him they'll return someday. Two weeks later, Geo reunited with both of them on the school's roof.

Omega-Xis's story in the anime is not really different than the games (stealing the Andromeda Key and escaping to Earth). However, a voice seemed to have called him to Earth, later revealed to be the three AM-ians. Before landing on Earth, he fought Cygnus and lost balance, falling down on Geo by accident. Like the games, he uses info on Geo's dad as a bribe. However, he did not know he was an AM-ian until he was told by the other three AM-ians. He had broken the Andromeda Key on two occasions, the second time destroying it completely.

In Tribe, Omega-Xis swallowed a mysterious sword known as the, "Sword of Berserker", while visiting a museum with Geo (Subaru). He and Geo are then pursued by Yeti Blizzard and Dark Phantom(Phantom Black) who caused the uproar that lead to Omega-Xis swallowing the sword.

Throughout the series, Omega-Xis experiences some kind of painful convulsion that is centered around the area in which the sword is stuck, but he continues to play the tough guy and tells Geo that it isn't anything serious. Later on, Geo gets a fish bone caught in his throat before being called over to the pyramids of Egypt, and Omega-Xis compares the bone to the sword, saying that he "got what he deserved". The pain in Omega-Xis' throat is revealed to be caused by the fact that he cannot control the mysterious OOPArt, and it will continue to pain him until his body has properly fused with it.

Omega-Xis never came in contact with the "Star of Shinobi" or the "Rock of Dinosaur" until the last episode, only allowing the audience a glimpse of the Saurian and Shinobi forms.

Below is the capabilities of Omega-Xis on his own, including several transformation he takes when appears as Mega Man's buster hand in Star Force 1 and 2. 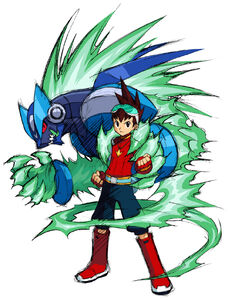 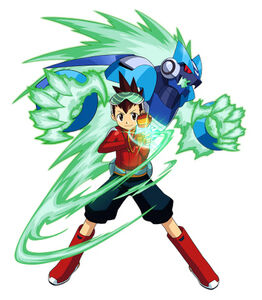 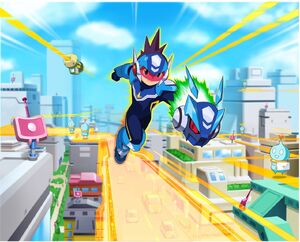 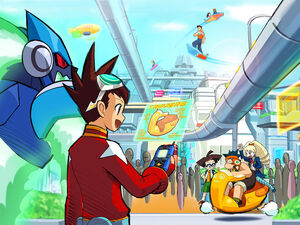 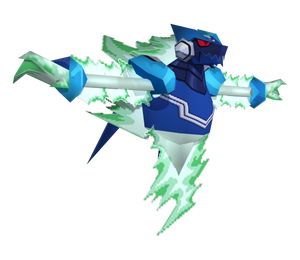 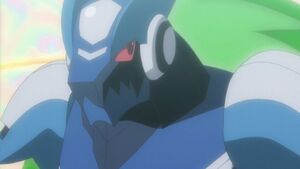 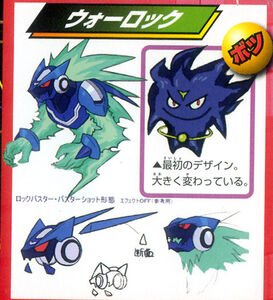 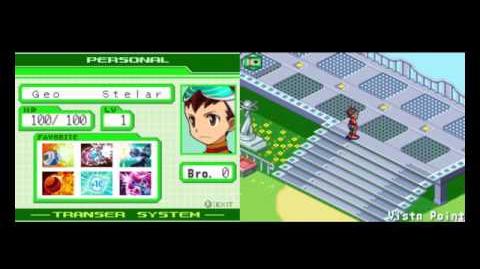 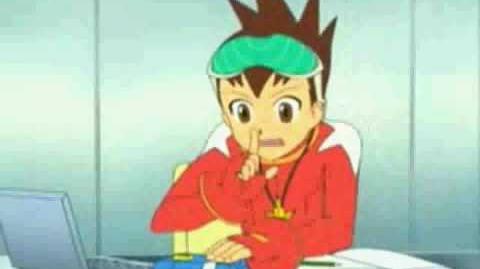