To keep the world safe from evil threats.

Omi is a main character of Xiaolin Showdown and Xiaolin Chronicles. He was a primary character from the Xiaolin Temple who journeyed in a quest for all Shen Gong Wu as the Dragon of Water in training. An orphaned monk, Omi was raised by Master Fung in the Xiaolin Temple, a mystical home where monks train to become Xiaolin Warriors. Omi eventually became the Xiaolin Dragon of Water and although he believed he was the "chosen one", he met with three other soon-to-be Xiaolin Warriors named Raimundo Pedrosa, Kimiko Tohomiko, and Clay Bailey. Omi was initially skeptical and wary of them, beginning to doubt himself as the chosen one. However, Omi began to take a fondness for them, and they became not only his teammates but also his best friends.

The Xiaolin Dragon of Water met many enemies and adversaries with his team, ranging from the evil boy-genius, Jack Spicer, the evil Heylin witch, Wuya and to the once-good but currently evil Heylin Dragon, Chase Young. Omi's signature Shen Gong Wu is the Orb of Tornami, corresponding with Omi's liking towards water.

Omi has lived at the Xiaolin Temple for most of his life. He was an orphan taken in by Master Fung, the head of the temple. He was very proficient in martial arts, so Master Fung started training him to become the Xiaolin Dragon of Water. Omi met the rest of the Dragons, and they began their quest to find all the Shen Gong Wu. Omi did not start off too well with his fellow Dragons, especially Raimundo, who pulled his pants down several times. This was when they first met their enemies; Jack Spicer and Wuya. He fought Jack Spicer in a Xiaolin Showdown for the first time, his Two-Ton Tunic for Jack's Mantis Flip Coin. He began to lose, due to how heavy the Two-Ton Tunic was, but after using everything he learned from the other Dragons (and Jack's carelessness), he got to the finish first and was able to claim the Eye of Dashi as theirs.

After some time, they met Chase Young. Chase saw potential in Omi, saying that he would one day become powerful enough to defeat him. Chase, knowing this, told Omi he was working for the wrong side. He started working to turn Omi to the Heylin side, or else he would be forced to destroy Omi altogether. Chase convinced him to go into the Ying-Yang world to look for Master Fung, whom Chase had imprisoned. Omi, not knowing the danger of using the Ying Yo-Yo, entered the Ying-Yang world, and came out without his good chi, turning him evil. Feeling betrayed by his friends, Omi joined Chase's side and for a time ruled alongside Chase.

The other monks were able to restore Omi's chi, but Omi was still bound by the pledge of loyalty he made to Chase while on the evil side. Chase took possession of Omi's chi (shown through the transfer of his forehead dots), and in this way made Omi one of his Jungle Cats. With Omi's chi, Chase was even more powerful and unstoppable.

Omi´s friends eventually wagered themselves and their eternal loyalty to Chase in exchange for Omi's freedom in a 4-on-4 soccer Showdown, which after a very tense game, the Xiaolin side won, resulting in Omi rejoining the good side once again and the world is restored to normal.

After months and showdowns, Master Fung told all the dragons that he would promote only one monk to master dragon, and tells them they all had to go on a quest of their own choice. Omi decided that he would go back in time to stop Chase Young from ever becoming evil. He did so by freezing himself for 80 years, so he could be awake in the future to get the Sands of Time. He found the temple destroyed, and the other monks captured. Jack Spicer had gained the upper hand and became the Emperor of Darkness. In this future, it had been determined that Kimiko had been promoted to head dragon. Eventually, Omi was able to get the sands of time and travel back in time to save his friends from that horrible future. There, he switched the Lou-Mang-Long soup (Soup of the dragons) Hannibal Roy Bean planned to give Chase to make him evil for pea soup. Going into the present, he finds that Clay Bailey had become the head dragon and had the other dragons farm and live another life in the evil world concurred by an evil Master Monk Guan, whom Hannibal turned after failing to do so to Chase. They were captured, and to free them, the good Chase Young drank the evil soup and became the evil lizard creature he was in the original timeline, sacrificing his good self to do so. Omi returned to stop what he did. Omi, Kimiko, Clay, and Raimundo fought Hannibal Bean, Evil Master Monk Guan, Chase Young, and Wuya, a showdown the Xiaolin monks won. Omi returned to a normal present, where Master Fung eventually declared Raimundo Pedrosa the head dragon. In the end, they all got ready to battle every villain they had ever faced before the show ended.

Omi became Shoku warrior and eventually decides to make Ping Pong, the new Xiaolin dragon of wood, his apprentice. In the episode "Chase Lays An Egg" Chase reveals to Omi that they are related, which greatly shocks Omi.

Omi is generally depicted as one of the most talented characters in the series, who can be naïve and egotistical at times. He is a cheerful person who despite having an isolated upbringing, tries his best to understand his new teammates' modern lifestyles and culture. He considers the other monks his friends, which he brings up throughout the first season of the original show. Because of his age and naivety, he's often a target of teasing from Raimundo, as seen in "Like a Rock!".

Initially, he acted sexist to Kimiko because what little knowledge of women he knew came from a dated sociology book from the eleventh century. Likewise, his ego and sense of superiority originated from a combination of lacking social skills and having underdeveloped empathy. From the second season onward, Omi grew to be arrogant, condescending, and elitist towards other characters, particularly his fellow teammates. Such behavior was carried over into the reboot series and more or less became Omi's "default" personality.

One of Omi's greatest strengths is that he tries to see the good in everyone; this can be seen in his relationship with Jack Spicer. He tries to convince Jack to forgo the Heylin side and even offers to join the monks at the Xiaolin Temple in "Citadel of Doom". Likewise, he believes there is good in Chase Young and that plays into the series finale in which Omi believes turning Chase away from evil will fix everything. Omi takes his duty as a Xiaolin Warrior seriously and has a strong code of honor. However, this makes him very naive, quite gullible and easily misled, which has given him a history of being tricked by Jack and Chase countless times. Omi truly hates it when others take advantage of his trust and manipulate him in every way, especially Jack who always betrays him again and again.

A noticeable trait and recurring gag in both series is that Omi does not understand metaphors or slang that well, which in turn prompts everyone (particularly Raimundo) to correct him. It's implied in "Shen Yi Bu" that one of his hobbies is studying Shen Gong Wu, as he studied the Sword of the Storm. He's shown to be quite good with basketball following the events of "My Homey Omi". Another talent of his is being able to play chess with himself.

Omi was a very small boy, bearing a large, circular, bald head. Whilst having yellow skin, he has a big forehead where nine white dots appear when Omi fights with his true potential. These white dots can be taken as a metaphor of him unleashing his ultimate potential.

Aside from this, he has elongated thin black eyebrows and small black eyes. He was also known to always wear his monk uniform, consisting of a red shirt slightly revealing his neck with black highlights, held tight with a black belt and using black pants with black dress shoes. He tends to wear this all the time, due to Omi's usual life of a monk, he was unknown of the rest to the world outside the Xiaolin Temple. The only times we saw him in anything but his monk uniform was when he would change into his special armor for a Xiaolin Showdown.

In addition to his elemental abilities and martial arts skills, he had other superhuman attributes such as: 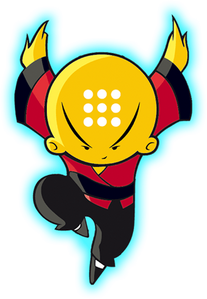 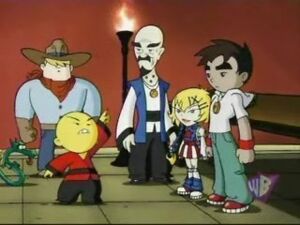