Emperor of the Viltrum Empire

Atone for his crimes.
Protect Earth. (both succeeded)

Art Rosebaum
Allen the Alien
Guardians of the Globe (formerly)

Omni-Man also known as Nolan Grayson, is the deuteragonist of the Invincible comics and the main antagonist of the first season of its 2021 animated adaptation. He is an alien from the planet, Viltrum, and became the father of Mark Grayson, who would become the superhero Invincible. He was revealed to be a villain upon slaughtering the Guardians of the Globe, but redeemed himself for the sake of his family and to protect the Earth from the Viltrum Empire.

He was created by Robert Kirkman and Cory Walker, and first appeared in Invincible # 1 in January of 2003.

In the titular animated series, he is voiced by J.K. Simmons, who plays J. Jonah Jameson in the Sam Raimi Spider-Man trilogy and the Marvel Cinematic Universe, Tenzin in The Legend of Korra, and Ford Pines in Gravity Falls.

He is the father of Invincible and Kid Omni-Man. He came to down earth as an agent of the Viltrum Empire and was supposed to take over the world for their cause to expand their empire more. Eventually, he battled his son nearly killing him. Still having love for his son, Omni-Man fled out of Earth and created a new life for himself on a planet inhabited by Mantis-People. There he met Andressa, whom he would marry and have named Oliver and would later be adopted into the Grayson family.

Nolan was born on the planet Viltrum in 1992 and is the son of Argall, the leader of the Viltrumites, and an unnamed woman. When he was young, Argall was killed by Thaedus, who no longer believed in the Viltrumites' violent ways, and as a result, Nolan's true heritage was hidden from the recorders to hide him from enemies. The Viltrumites then organized the Viltrum Empire, which was led by Thragg, and Nolan decided to help the empire conquer planets. Nolan showed himself to be a capable warrior, and was so successful, that he became the commander of his own unit.

A virus started to destroy the Viltrumite population, the Empire decided to take advantage of their decelerated aging, and infiltrate a society and weaken the chance of it resisting a takeover. Nolan decided to take on this mission, and flew to Earth to accomplish their task, meeting Cecil Stedman to learn more about human culture. Nolan then adopted the last name Grayson to appear more human, and met a woman named Debbie, and the two later married and had a son, Mark Grayson.

Cecil then set Nolan up as "Omni-Man" to be Earth's newest and most powerful superhero, and became an ally of the Guardians of the Globe. Nolan also met with costume maker Art Rosebaum, who designed him a costume for the superhero. Additionally, Nolan lied to Cecil, Debbie and Art about the reasons he was on Earth, and deceived his family and allies for years.

During the time, he would fight many villains to protect Earth, and kept an eye out for anyone who was strong enough to protect Earth from the Viltrum Empire. While raising his son, he revealed to him that he was half Viltrumite and half human, and one day would receive superpowers.

Once Mark received his powers, Nolan helped his son get his costume and later fight the Flaxans, who were aliens from another dimension. Nolan was abducted by the aliens for eight months, who neutralized his powers until they returned to Grayson and he escaped from the dimension. Upon his return, Nolan continued to work on helping the Viltrumites invade Earth, and had his son be occupied with fighting Allen the Alien. When Mark went to Upstate University, Nolan decided to put his plans into motion and slaughtered the Guardians of the Globe at their headquarters. After committing the act, Nolan hid in the spotlight to not become a suspect, but struggled with telling his son about their true origins. Though Nolan thought he succeeded in killing all of the members for the Guardians of the Globe, but learned that the Immortal survived and was looking for Omni-Man.

Nolan killed the Immortal in front of his son, and revealed his true origin and goal to help the Viltrum Empire invade Earth. He asked Mark to join him, but his son refused and the two battled across the globe. Omni-Man nearly killed Mark, but instead flew off into space in tears, not being able to kill his son. Realizing that he loved Mark, Nolan instead conquered another planet to lesson his crime of deserting the Viltrum Empire. He then came to the planet of Thraxa, where he learned that the Thraxans have a short life span and the oldest individual would rule the planet. Nolan became their ruler and would mate with a Thraxan named Andressa, who would have their child.

Wanting to speak with Mark, Nolan sent a Thraxan to collect his son from Earth and to bring him to the planet. Nolan and Mark reunited, and the former explained that he need his son's help to protect Thraxa from the Viltrumites. He also revealed that he had a child with Andressa, and the Viltrumites would kill the infant since his purple skin would be seen a defect. Nolan and Mark would fight the Viltrumits from invading Thraxa, but the former was injured and taken prisoner while Mark was saved and escaped.

When the reboot timeline started, Mark find himself re-living the events of the original series, but knew of what would happen to his father. In the reboot timeline, Nolan learned that Mark was hiding his abilities after fighting the Flaxans, and confronted him during dinner.

Mark asked his father did he love his mother and him, and Nolan realized that he truly loved his family before Mark revealed that he knew of his plans. Nolan then attacked his son, and was tricked by Mark into rushing into the Guardians of the Globe headquarters. Mark told the Guardians of Nolan's plan, and they decided to restrain him before Omni-Man killed the Immortal, however, the superhero survived the attempt.

When Stedman arrived to restrain Nolan and bring him to the pentagon, Grayson appealed to his son that he was sorry for his actions and asked for forgiveness. Allen the Alien then arrived and asked for Nolan's help to fight against the Viltrum Empire, and agreed to before telling Deborah he loved her.

Omni-Man after slaughtering the Guardians of the Globe.

Nolan leaving Earth in tears after refusing to kill his son.

Omni-Man in the Invincible animated series. 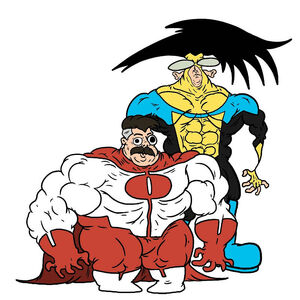 Omni-Man and his son, Invincible drawn by YouTube animator and artist, MeatCanyon.