Destroy X Digimon or anyone will go against Yggdrasill (formally).

He is voiced by Chika Sakamoto and Mayumi Yamaguchi in the Japanese version.

Omnimon attempts to execute all X-Antibody Digimon. When his friend Gallantmon attempts to stop it, the two duel. Omnimon is the victor, impaling Gallantmon through the chest with the Grey Sword. Afterwards, a shadow of doubt and regret casts itself over Omnimon. When DORUguremon arrives in the Yggdrasill zone to take down Yggdrasill, Omnimon confronts it and the two begin to battle, although Omnimon no longer seems certain as to what he's fighting for.

When Omegamon inflicting heavy wounds on DORUguremon, including cutting off his wings, DORUguremon digivolve into Alphamon, and Omnimon was shocked by Alphamon's appearance that is Dorumon's true form who has his memories. Omnimon then immediately submits to his lord. Together, the two move onward toward Yggdrasill. When they reach Yggdrasill's last guardian, Death-X-DORUgoramon, Omegamon is powerless and Alphamon defeats it, onward, they both encounter Death-X-mon, Alphamon: Ouryuken sacrifices himself to clear the path to Yggdrasill. In an ironic twist, Omnimon absorbs Alphamon's X-Antibody and digivolve into Ommnimon X. Angrily about Yggdrasil's foul plan, Omnimon falls upon Yggdrasill's core, shouting "All Delete!" as he skewers the crystal ball-like structure with the Grey Sword. As the movie ends, Omnimon X and GallantmonX are shown standing on a mountain, discussing the past, present, and future of the world, Yggdrasill, and the Royal Knights. 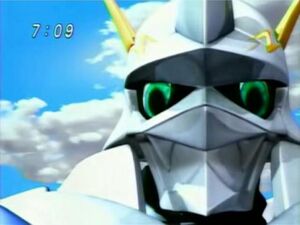 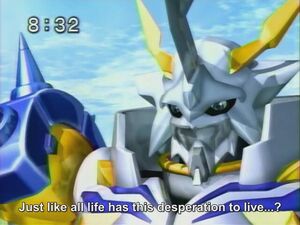 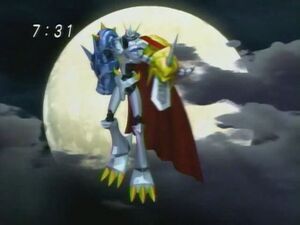