Giving advice and hints to Sonic and friends

Help Sonic and his friends with their adventures (ongoing)

Artificial Intelligent Advisor
Omochao (オモチャオ Omochao?) is a robotic Chao with a propeller on its head. Its name is a portmanteau of the Japanese word omocha, meaning "toy", and Chao. In some games he is renamed Robochao in English, but he is always called Omochao in Japanese.

In the Japanese version, as with various Chao, he is voiced by Etsuko Kozakura in all of his appearances.

In English, he has been voiced by Lani Minella between 2001 and 2003 and in Mario & Sonic at the Olympic Winter Games, Liza Jacqueline in Sonic Riders, Rebecca Honig in Sonic and the Secret Rings, Laura Bailey between 2010 and 2011, and currently by Erica Lindbeck since 2019.

Omachao is a robotic Chao who appears in a variety of games and places to serve as an informant for characters and offer hints and advice to players whether they want it or not. He also works as a TV personality.

Omochao is a friendly, helpful and cheerful robot who is usually willing to provide aid to those who seeks his help. However, he has his limits when people begin to abuse or roughhouse with him. Deviating from normal Chao, Omochao is able to talk in regular language, though he exhibits a verbal tic (in Japanese): he nearly always adds "Chao" to the ends of his sentences.

Described as all-knowing, Omochao possesses a vast and unlimited knowledge―he knows everything about everything. He is also one of the few, if not only individual who can understand the language of animals.

With the propeller coming out of his head, Omochao can achieve flight. He can as well survive many injuries, including being scorched by any dangerous machinery,, and being used as weapon to throw at enemies. 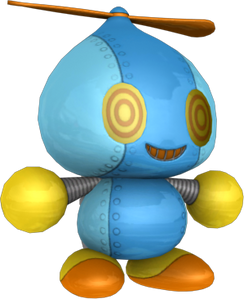 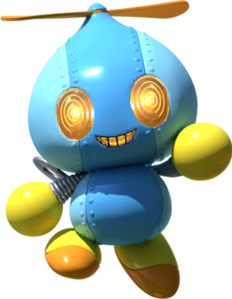