Employee at The Dollar Store

Child-like Good Samaritan
Onion is one of the titular main protagonists of the 2018 Cartoon Network series Apple & Onion.

He is voiced by Richard Ayoade.

He is a humanoid spring onion who originally lived with his parents before deciding to leave home and go to live in a city.

After arriving in the city, Onion meets an apple named Apple (who had also left home to live in the city). Onion and Apple end up becoming friends and roommates who live in an apartment owned by Falafel, who is an old friend of Apple's father.

Onion has a green body and a white head with two floppy ears. He also wears gold glasses and white trainers with red and black stripes. He also speaks with an English accent. Though he is lankier than Apple, he is shorter than most of the other characters. 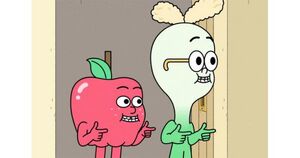 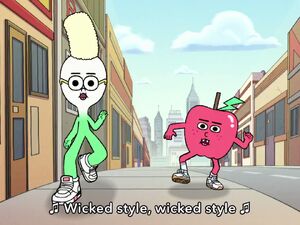 Retrieved from "https://hero.fandom.com/wiki/Onion_(Apple_%26_Onion)?oldid=2171866"
Community content is available under CC-BY-SA unless otherwise noted.