Oobi is the main character of the Noggin series of the same name. He is a curious, kind, and adventurous bare hand muppet puppet with eyes. He lives with his younger sister Uma and his grandfather Grampu.

He was played by Tim Lagasse, who was also known for puppeteering Crash from Crash and Bernstein.

In the episode "Superheroes," Oobi plays a superhero called Super-Oobi.

Oobi is four years old. His parents are never seen, named, or mentioned on the show. Grampu seems to be his only caretaker.

Oobi is the calmest, gentlest, and most level-headed of the kids. Each episode centers around Oobi discovering more about a simple concept like a new sport, a new place, or a particular holiday. Uma and Kako provide comic relief, often misunderstanding Oobi's discoveries in a comical way or providing humorous commentary about the episode's topic.

As a nice and optimistic person, Oobi doesn't have any rivals or enemies. He is closest with his sister Uma and grandfather Grampu. His best friend is his next-door neighbor Kako, who visits Oobi's house so much that he is practically another member of the family. Oobi's friendship with Kako has lasted since they were very young. They have a lot of the same interests, like playing T-ball and taking care of pets. However, their personalities are drastically different and balance each other out. Kako is jokey, energetic, and somewhat conceited while Oobi is more reserved and thoughtful.

Oobi is also friends with Frieda the Foot, a girl who happens to be a foot puppet instead of a hand. When he first met Frieda, Oobi was instantly smitten with her but thought they couldn't play together because they look and act differently. Luckily, Grampu helped him realize that differences are good and people come in many shapes and sizes; he has been a close friend of Frieda ever since.

Oobi's favorite toy and prized possession is a red toy racecar, modeled after a Ford Mustang. Although he loves playing with it, he obsesses over keeping it in perfect condition, treating it more like a collectible than a toy. He is always hesitant to let anyone else touch his car, out of fear that they'll somehow break it. On the one occasion that Oobi let Uma play with the car, she accidentally broke a loose wheel off and ended up destroying the whole thing while trying to fix it. Luckily, Grampu was able to fully repair the toy with the kids' help, and Uma even fixed its squeaky wheel with some oil.

In one episode, Oobi plays "Super-Oobi" in the park and goes around helping people in need. He, Uma, and Kako help a girl with her juice box and bring a cat down from a tree. 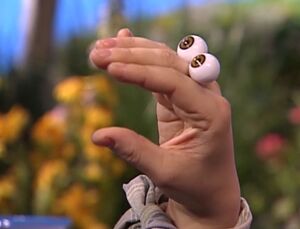 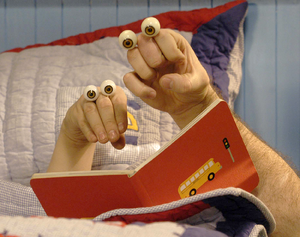 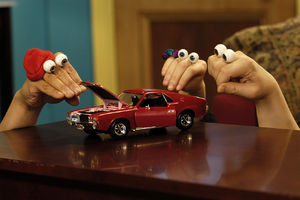 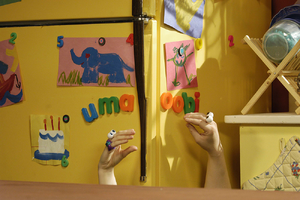 Oobi and Uma in the kitchen 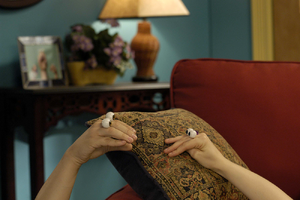 Oobi trying to cheer up Uma 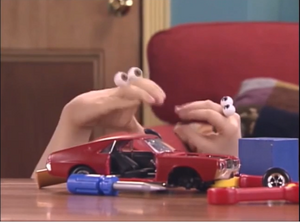 Oobi yelling at Uma for breaking his toy car. 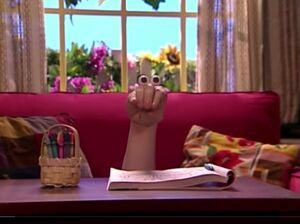