Heroes Wiki
Register
Don't have an account?
Sign In
Advertisement
in: Steven Universe Heroes, Protector of Innocence, Alter-Ego,
and 18 more

Opal is an character in "Giant Woman" which is the fusion form of Amethyst and Pearl together. By synchronizing together via dancing, the two can fusion of a powerful gem, an "amalgam of their combined magical and physical attributes fused into a single entity". However, when a disagreement between the two happens (such as an arguement between the two), Opal is then separated into Amethyst and Pearl.

Opal has bright-periwinkle skin, and thick, wavy, off-white hair. Her hair extends slightly past her calves, tied back into a rowdy ponytail by a pale salmon band. Extending from off the sides of the ponytail are two small pigtails in the front tied by pale yellow ties and chin-length bangs, which resemble Pearl's. Opal has a lean, toned body with two pairs of slender arms. Her face is thin and rounded, inheriting Pearl's pointed nose and Amethyst's plump lips. She has two gemstones in the same places where Amethyst and Pearl's gemstones are. Opal is very tall, being at least twice as tall as Garnet. Her height is partly due to her constantly being en pointe, meaning constantly on the tip of her toes. Her outfit consists of fuchsia, knee-length leggings with pale-violet cuffs rolled up, and yellow flat boots.

Opal had a pastel teal top with a drape in the front and back that went down to her shins, featuring an accented star at the base. The way she wore these drapes were similar to Amethyst.

As seen in "The Return", Opal had undergone some changes. She had a sash around her waist and an added neckline to her top. Her appearance changed in accordance with Pearl's regeneration in "Steven the Sword Fighter". However, since she appeared in a white and green tinted light, the colors of her clothing are yet to be confirmed. They are assumed to be the same, with slight differences.

As seen in "Log Date 7 15 2", Opal has undergone another change due to Amethyst's regeneration in "Reformed". The sash around her waist was replaced with a yellow waist base and light green design with straps overlapping the yellow part. Her neckline has also become a singular dark green color.

As seen in "Together Alone", Opal has undergone yet another change due to Amethyst's regeneration in "Crack the Whip". Her top is now ripped and exposes her waist. Her leggings are also now shin-length and more orchid.

Amethyst and Pearl are extremely powerful when they are willing to work together in the form of Opal. Amethyst's ability to live in the moment along with Pearl's obsessive single-mindedness results in a stable fusion. Opal achieves a peace in that balance that Amethyst and Pearl rarely experience on their own. At times, Opal is so calm and at peace that it causes her to forget the task at hand (for example, forgetting to retrieve the Heaven Beetle after rescuing Steven). In addition, according to the book "Guide To The Crystal Gems", Opal is very forgetful.

The balance that holds Opal together is, by far, the thinnest of all the other known fusions. The ease with which Opal can separate is very different from that of Garnet, who is almost impossible to unfuse except under extreme emotion, or if by force (Ruby and Sapphire can willingly separate anytime they wish). If Pearl and Amethyst have conflicting views while fused, this can cause Opal to revert to her constituent Gems; the slightest dissonance between the two poses a danger of involuntary defusion.[1]

Opal's personality is theorized to be a combination of Amethyst's power, along with Pearl's grace and decisive determination. She appears to be more open to Steven's desire to have fun and play, as she sang part of his song back to him. This is a trait that can be traced back to Amethyst.

In "Fusion", Opal shows both of Pearl and Amethyst's personalities by posing with elegant and silly poses.

Though it is unknown when Opal first formed, it was before the beginning of the series. Amethyst and Pearl begin to quarrel, with both of them naming reasons why they never form Opal after Pearl wins checkers easily. Steven asks what Opal is, and Amethyst describes as a tall, "stone cold betty." Pearl explains to Steven what fusion is, and throughout their mission in the Sky Temple to recover the Heaven Beetle, Steven begs the two to fuse. After a corrupted gem swallows Pearl's spear, Amethyst and Pearl decide the situation is dire enough to fuse. They attempt to fuse, however, they initially fail. After Steven gets eaten by the corrupted gem, Opal's arms reach into the corrupted gem, grabbing Steven and Steven Jr. After some acrobatics and flips, Opal sets down Steven, firing at the corrupted gem with her energy bow and taking it down in one shot. When Steven asks Opal if she knows who he is, she smiles and playfully quotes his song from earlier in the episode. Opal and Steven warp back to the Temple, but when Garnet asks where the Heaven Beetle is, Opal frantically says "I don't have it." before promptly unfusing.

As Peridot's hand ship approaches the Earth, Steven and Lion teleport back to the Temple where Garnet and Opal, are attempting to stop the ship. Opal shoots her arrows at the ship, though it has no effect. Upon seeing that Steven came back, Opal is shocked and unfuses.

Opal is extraordinarily agile, limber, and gracefully elegant, being able to stand on the tips of her toes constantly and execute acrobatic reflexes. Because of this, she is swift and agile in battle, able to outmaneuver almost any opponent she comes across. Opal can jump exceptionally high and far, even from a stationary position. These abilities also grant her impressive parkour and free-running skills, allowing her to scale almost any surface or terrain quickly. Due to Opal being a fusion of Amethyst and Pearl, she can summon either Amethyst's whip or Pearl's spear at will. Opal is able to combine these two weapons and make her primary weapon, an opalescent recurve bow. 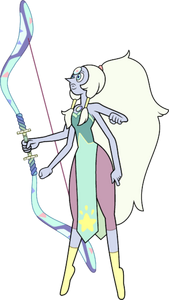 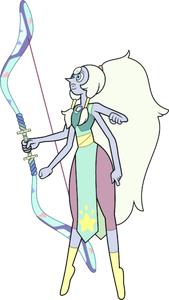 Opal's design previous from "The Return". 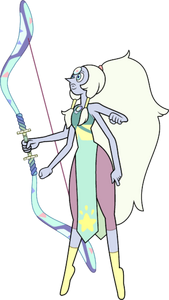 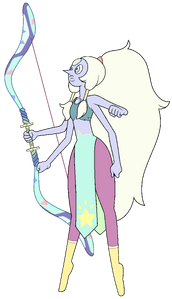 Opal's design current in "Together Alone". 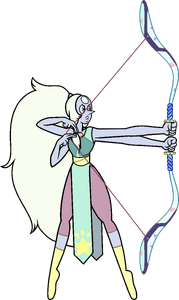 Pearl and Amethyst fusing into Opal 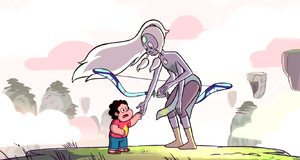 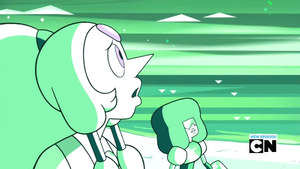 Independent Together Opal can fly 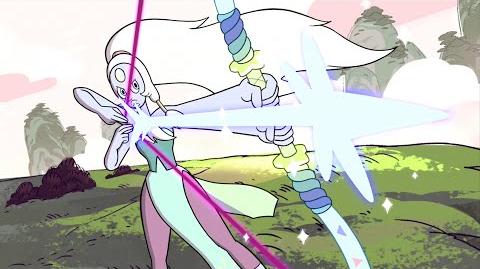