Heroes Wiki
Register
Don't have an account?
Sign In
Advertisement
in: Articles under construction, Avatar Heroes, Female,
and 29 more

Opal (The Legend of Korra)

Member of the Air Nation and Bolin's girlfriend

Spending time with her boyfriend Bolin.

Kuvira
Baatar Jr. (formerly)
the military of the Earth Empire

Opal is the supporting character of The Legend of Korra. She is a member of the new Air Nation and the daughter of Suyin Beifong and Baatar, half-niece of Lin Beifong, and granddaughter of Toph Beifong. She was the first new airbender to be instructed by Avatar Korra. She is also the girlfriend of Bolin.

Opal is a beautiful, young adult female of fair height, with olive green eyes and black, shoulder length hair, with small strands framing her forehead. She also wears the standard Airbender Wingsuit and a pair of metal fighting sticks on her glider suit's upper back portion.

Opal is genuinely amicable and outgoing, quickly extending a hand of greeting to the members of Team Avatar when they arrived in Zaofu. She also is very shy while introducing herself to the group, as she blushed and looked down when interacting with Bolin. While practicing her airbending after dinner, she joked around with Bolin after the latter attempted to flirt with her, displaying a little bit of her easygoing side. Her easygoing side conceals her passion and discipline in her interests, such as her focus and training in her newly acquired airbending abilities. At the same time, she also possesses a strong belief in honesty and in a person simply being themselves.

She has also demonstrated a more serious demeanor, such as when she stopped the fight between Lin and her mother and angrily questioned why they would be fighting each other after so many years of separation, or whenever the subject of Kuvira was touched upon.

Opal also seems curious and interested in the outside world, reveling in Bolin's tales about his days living on the streets of Republic City. Having spent her life within the safe confines of Zaofu, she seemed impressed by his adventures, calling his life exciting. She also inherited much of her mother's humanistic way of thinking, encouraging Bolin to pursue training in the art of metalbending, believing in his potential to do so.

As a child, Opal was rather inconsiderate and selfish, refusing to share her dollhouse with her adoptive sister, Kuvira, and refusing to acknowledge her as a sister. She went as far as calling her a stray dog that nobody, not even her own parents, wanted around. While she said this after being understandably upset with Kuvira for breaking her dollhouse, it still had an impact on Kuvira later in her life.

Despite being a new airbender, Opal has shown considerable skill in the bending art, able to seamlessly create swirls of air in tandem with Korra, who referred to her as a natural. While practicing after dinner, Opal was able to perform multiple blasts of air and create a powerful air wave by striking the ground. She was even strong enough to break up a duel between her mother and her aunt Lin, two powerful earth- and metalbending masters, in a single move. Three years later, Opal has shown to have improved her airbending skills during her time with Kai in their patrol around the Earth Kingdom. 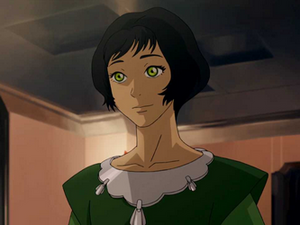