She is voiced by Mie Sonozaki in the Japanese version.

When Angewomon and MagnaAngemon digivolve to their Mega forms; Ophanimon and Seraphimon respectively after explaining how light and darkness exist alongside order and harmony and daring the Great Catastrophe, evil enough to even deceive darkness, to behold their light of hope. Ghoulmon who had tried to kill them earlier alongside anyone else in the same space as the Crest monoliths, immediately shot them with its Death Arrow, which was completely ineffective.

Ophanimon charged at it, with Ghoulmon attempting to stop her with another Death Arrow which could not go through her shield and Ophanimon pierced through Ghoulmon with her Eden's Javelin, destroying its eye and killing it.

Her corrupted form, SkullKnightmon was able to manifest herself over Ophanimon and protect her from Abbadomon's attack. 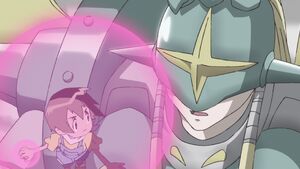 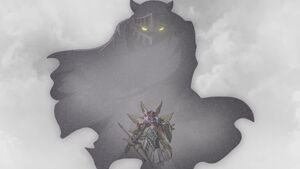 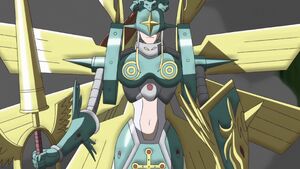 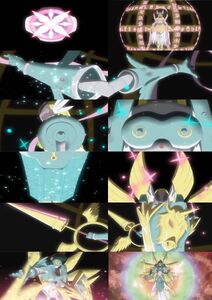