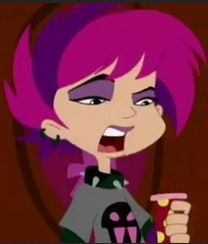 Ophelia Ramírez is one of June's best friends and recurrent character in the series. She is shown to have a deadpan, cynical personality. She is voiced by Candi Milo.

Ophelia is a punk rocker girl with short spikey pink hair with purple colored highlights and dark eyes. Being from a Latino-American family, she once has blonde hair (which is odd to her heritage). Ophelia is known for her goth lotima and even harajuku fashion, since she favored this, she wears a black spike choker, grey shirt with black sleeves that has a black and pink skull on the middle of her shirt, black pants and black boots.Ophelia also wore a different outfit such as a black and pink goth school uniform. She also appear to be very pretty stunning and gorgeous.

Ophelia is a rather glum and deadpan punk rocker girl in training whose opinions of bands, clothes, and music change almost as often as her way. She is opinionated, skeptical and alternative who will not be caught wearing or even associating with anything that is mainstream. Although Ophelia seems to be emotionless, she is shown to have a soft, vulnerable and emotional side as she actually cried because she told June that she is her best friend but has no idea why because June is always running away (because of being the Te Xuan Ze). She even think of Roger of willing to get away from her and she has a dream sequence with him that she refers to as "A nightmare" . When choosing whether or not to go out on a date with Roger, she comments that she'd rather put her head in a bucket of cockroaches. She seems to be very close to Jody, as seen when she commented on how happy she looks and again when she stood up to Melissa O'Malley after seeing Jody cry during her speech while June was finding the Vindolf Hobgoblin, and as a result of her speech, she (unwittingly) becomes elected for class president after earning more votes than Juniper or Melissa.

In general, Ophelia has a goth attitude on the outside, but on the inside she is a great friend, as Ophelia stands up for her friends. She finds Jody and Roger to be weird, but as she said in "Keep your friends close and your stupid friends even closer enough". Roger has a hinted crush on Ophelia and the same perhaps goes for Ophelia, except, she hasn't admitted it yet, although Ophelia does show that she cares about Roger.