Remove the Great Red out of the Dimension Gap & live in a world where everything is nothingness.

Ophis is a character from the Highschool DxD series. She is the founder & former leader of Khaos Brigade & was one of the most powerful dragons to have ever existed until being depowered in Heroic Oppai Dragon arc by Samael's curse, which gave birth to her clone Lilith.

Being born from darkness, Ophis rarely shows any signs of emotions, with a goal to get rid of Great Red out of the Dimensional Gap to obtain "silence". Issei describes her as an honest & pure dragon who is naive. Azazel indicates Ophis have changed because of her interaction with humanity, with a yet unexplained answer.

In a side-story, Ophis shows a somehow really rude yet accurate way to describe people.

It is unknown what Ophis really looks like but she is shown to be a true shapeshifter being able to manipulate her appearance at will, such as her body shape & size or regardless of race, age or gender. Unlike most dragons in the series whom resemble the classical reptilian monsters seen in mythologies, Ophis is a human-shaped dragon.

Azazel once stated that Ophis once took the form of an old man before deciding to change it.

Her current appearance is that of a cute young girl with long black hair down under her hips wih gray eyes & an unseen pointy ears different from a normal human's covered by her hair. She also wears a provocative black Gothic Lolita dress which exposes her breasts, albeit with black cross-shaped tape covering her nipples.

Some time in the distant past, Ophis was born in the Dimensional Gap and lived there as its home. Eventually, long ago, Ophis left the Gap, but when she attempted to return, she found that the Great Red had taken up residence there. Before assuming her current form, she used a different guise in the form of an elderly man. At some point before the start of the series, Ophis became the leader of the Khaos Brigade.

She made her official appearance in Volume 6 in the Underworld to look at the Great Red before retreating. She was asked by Sirzechs, if she would quit the Khaos Brigade, but refused since Sirzechs refused to give her the area of the dimensional rift and to surrender to her rule.

She reappears in Volume 11 at the Hyoudou Residence along with Le Fay Pendragon, Fenrir, and Kuroka, wanting to observe Issei, as he was having unusual growth of powers. Her powers were later stolen by Cao Cao and Georg, who used Samael on her. At the end of Volume 11, she was kidnapped by Shalba Beelzebub with Issei rescuing her, but receiving Samael's curse as a result.

In Volume 12, Ophis and Issei were on top of the Great Red after he passed through the crumbling dimension they were both on, rescuing the two of them. She then used her powers on Great Red's flesh to form a new body for Issei. When Issei returned to the Underworld, Ophis guided Issei by sensing where his friends were, telling him the directions on how to get there. Following the crisis in the Underworld, she moves into the Hyoudou Residence at the end of Volume 12 to continue "observing" Issei much to the shock of the other girls, as a part of her was used to recreate Issei's body with Great Red's flesh.

In Volume 13 Extra Life, Ophis is seen playing with Rassei whom she has developed a close relationship with, even going as far as stating that she will train the young Dragon.

In Volume 15, Ophis is seen atop Fafnir's head and has Rassei on top of hers and said that with their combination, she thinks they could challenge Great Red.

In Volume 16, Ophis remained in Japan when Issei and his friends left to Romania but not before Ophis gives Issei some warning about the Evil Dragons.

In Volume 20, Ophis is seen watching over the Spectre Dragon egg whilst Crom Cruach observes her quietly. Issei remarks that Ophis' interest in the egg is probably because she's never seen something being born. Later, when Niðhöggr infiltrates the Hyoudou Residence, Ophis protects Issei's parents from Niðhöggr. However, Ophis is badly injured because she did not retaliate, she was saved when Crom Cruach appeared and scared Niðhöggr away. During Issei's battle with Rizevim, she speaks with him telepathically and together they chant a new chant that temporarily lets Issei borrow her power, which gave him access to a new form; Diabolos Dragon, however the form caused him some him Dragon Deficiency.

In Volume 21, during Issei's battle with Apophis, he asked Ophis for her infinity power to enter his DxD form. Later when Issei wakes up in the in hospital after his fight, Ophis had already transformed into an adult figure of herself, which he notices that he is able to see breasts again. Vali revealed that Ophis had adjusted the borrowed power by stabilizing the infinity power within him to a level that his mind and body could withstand, effectively curing him of his Dragon Deficiency and resulting her current state. When Issei heard about the loss of Azazel, Sirzechs and the others, Ophis and Lilith held his arm ensuring him that they'll always stay with him.

In Volume 22, Ophis reverted back to her younger girl form after sunbathing on the rooftop of the Hyoudou Residence.

Snakes: Ophis has the ability to manifest her powers in the form of snakes. These snakes have the ability to increase a person's power tremendously by consuming it. Another type of snake she creates can be used to bring out a Sacred Gear's full potential. While this can potentially lead them to achieving Balance Breaker more quickly, it can also break the Sacred Gear, killing the host.

Shapeshifting: Ophis is a true shapeshifter, able to alter her size, apparent age, physical attributes and characteristics, and even her apparent gender.

Immense Strength: Ophis is the strongest being in the world. According to Ddraig, her true abilities are stronger than the two Heavenly Dragons at their prime combined. So much so that when her powers were reduced to a level twice as powerful as the Heavenly Dragons, she felt "weak."

Immense Durability: Being an existence with the power of infinity, Ophis' durability borders on the point of near absolute invulnerability as shown when Ophis was stabbed by the True Longinus, a immensely powerful Sacred Gear capable of slaying Gods, and was completely unaffected when Issei stated that Ophis did not even shed blood. Even after being struck by Samael's extremely deadly dragon slayer poison, all Ophis felt was her power weakened; contrary to Vali who managed to survive due to his vast demonic power, but had to withstand tremendous pain from the poison until he was cured by Sun Wukong, and Issei who has a extremely tenacious durability, was ultimately killed by the same poison.

Telepathy: Ophis can sometimes communicate through others like she does during Issei`s battle to the emperor and Rizevim Lucifer. She helps him chant his new found powers to activate the Diabolos Dragon Mode.

Blessing: Ophis can 'bless' people, granting them certain advantages. These blessings don't seem to have a negative affect on Devils. With Asia, the blessing has increased her compatibility with Dragons, while with Irina, it has increased her luck.She can also give blessing that immensely increase people's power as shown when she bless Issei and Vali giving them the ability to use Diabolos Dragon and Diabolos Dragon Lucifer.

Flight: As a dragon Ophis can fly, but unlike other dragons that can fly by using their wings, Ophis can fly without using wings. She can fly through mid air via applying through her magical powers as an infinite being. 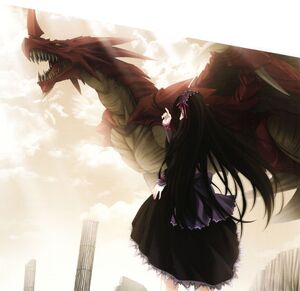 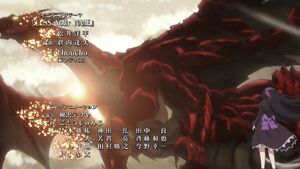 Retrieved from "https://hero.fandom.com/wiki/Ophis?oldid=1703017"
Community content is available under CC-BY-SA unless otherwise noted.