Guardian of the Requiem Blaster

Prevent Megatronus from committing genocide on the Cybertronian race

No information
Optimus Primal was the guardian of the ancient Cybertronian artifact, the Requiem Blaster, and was a major character in Power of the Primes, the final series in the Prime Wars Trilogy.

He was voiced by Ron Perlman, who also played Hellboy in the 2004 film and its sequel.

Optimus Primal was the latest guardian of the Requiem Blaster, as appointed by the Thirteen Primes, who were seen as gods. For as long as he could remember, he was sealed with it inside a dome in Primal Swamp to watch over it.

When Megatron came for the Blaster, Optimus Primal faced him and fought him to stop him claiming the blaster. When Megatron revealed to him that Cybertron was facing extinction, and he would die to protect it, Primal relinquished the Blaster to Megatron, who left the vault with it. As the former Decepticon and his team discussed their next move, Primal followed him outside and properly introduced himself, suggesting they head for the Athenaeum Sanctorum.

At the Cataclysm Tundra, Primal talked with Windblade, telling her that Megatron was honest in his motivations, and unearthed the Sanctorum's hidden entrance. Finding a data terminal inside, they learned of Primal's origins as an agent of the gods but were interrupted when Overlord and Rodimus Cron attacked. 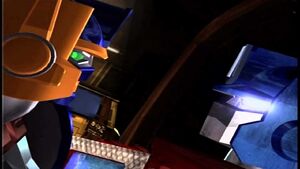