Leader of the Autobots

During the war, Optimus was killed in battle by Megatron, but was eventually resurrected. Coming to the dire realization that the war against the Decepticons had become a never-ending arms race, Optimus Prime challenged Megatron to single-combat, with their troops acting as witnesses to their terrible and final clash. The battle between both faction leaders ended with Megatron beaten down and goading Optimus into delivering the kill shot.

Optimus later found himself a wanderer, no longer leader of the Autobot forces. While traveling through Cybertron's barren wastes, he reminisced on his pivotal duel against his archenemy.

After a battle between Combiners on the planet Caminus, a dying Computron sends a message to Optimus that Windblade is heading for Cybertron. Upon arriving there, Windblade was preparing to end this war by destroying the Enigma of Combination; but it is stopped by Optimus himself, which causes her to shoot Starscream by accident.

After a tense stare-down, Optimus Prime breaking Maxima's rifle is the trigger that sends Windblade charging at the former Autobot leader, but he easily side-steps her sword. Prime reveals that he has been tracking the Cityspeaker since receiving a transmission from Computron, but Windblade has no time for his words, and renews her furious assault. Continuing to simply dodge her attacks, without retaliating, Optimus asks why she fired upon the Council, and is met with a tirade of anger against Autobots, Decepticons, and Combiners alike.

Prime insists that his Autobots always fought for a good cause, and that he cannot allow the murder of a Council member. After another failed attack, Windblade reveals that she had not been trying to kill Starscream, and that her true agenda is to deal with the problem of the Combiners. As she powers up her turbines to blow Prime away, the Autobot finally deploys his axe, fending off the sword strike that follows and disarming Windblade.

As the Cityspeaker lies exhausted, Optimus implores her to return home so as to avoid beginning another war, but her revelation that the Council possesses the Enigma of Combination changes his tune. Acknowledging that all of Cybertron is in danger from the artifact, the Autobot leader declares that they must seek the help of the one person possessing sufficient firepower to destroy it. Then, Optimus and Windblade go to an ancient arena of gladiators where they find Megatron battling against the Constructicons. Cue Optimus Prime, whom Megatron seems relatively pleased to see. As the two grapple, Optimus insists Cybertron is in danger, though Megatron doesn't seem to care. Megatron instead suggests Optimus can't live without a war, reminding him how he didn't pull the trigger years ago, before hitting him with a sucker punch. Windblade steps in, but not before an enraged Optimus lunges at Megatron. Optimus and Windblade again try to insist that Cybertron is in danger, though Megatron refuses to listen and attempts to walk away, causing Windblade to hit him with a surprise attack. Pleased with Windblade's tactics and attitude, Megatron listens to what they have to say. Upon being informed that Starscream and the Council have the Enigma of Combination, Megatron joins them, stating that he hates Starscream far more than he hates his.

Then, the trio arrives at the council tower and them sneak their way towards the main elevator. Up above, the councillors debate the intentions of rapidly approaching intruders, and the Mistress advocates using the Enigma of Combination to control the Combiners and threaten Prime's team into standing down. Optimus Prime announces that his party will return into exile once they are allowed to destroy the Enigma, but the Mistress fails to believe him, and gets into a shouting match with Windblade. The council decides to open fire on Prime and his team, causing the latter to be forced to defend themselves, and Windblade hears a mysterious voice in her head implore that she does not "let this happen". The thing gets difficult with the arrival of Devastator. While Optimus Prime is quick to blame Megatron, the former Decepticon leader points out that if this was his idea he'd have betrayed them already. Ordering Devastator to stand down, Megatron is surprised when Devastator refuses. The enraged combiner yells that they forced the gestalt to split because they all feared him. Optimus and his group engage Devastator but are interrupted by Victorion's arrival.

The Mistress of Flame insists that they use the Enigma to control the combiners and the others reluctantly agree. Unfortunately Rodimus is too injured to use it, and as a Camien the Mistress is incompatible. This leaves a seemingly reluctant Starscream to take the Enigma and end the conflict. However, Starscream gathering the Combiners with the goal of using the Enigma to fuse with them and become the ultimate lifeform. As Optimus Prime's words and Megatron's attacks go ignored, Starscream declares that he has become "everything".

Floating in Starscream's place is now an orb of energy, surrounded by broken Combiner parts and the spectral face of the ex-Decepticon. In a seeming fit of madness, Starscream begins pelting the surrounding city with energy beams from his new form, to Optimus's horror. In his throes, he sends himself tumbling to the bottom of the council tower. As Prime and Megatron recover from the initial assault, Starscream unleashes a black hole, which threatens to consume them until Windblade blows it back with her turbines. Starscream proceeds to hit the Cityspeaker with all his power, sending her falling to the ground, still. Just as Megatron insists that the battle is lost, Starscream's glowing form shoots forward towards him and Prime.

While Windblade is in her subconscious, she spoke with Metroplex and admitted she was wrong to want to destroy everyone. Recalling her role as a Cityspeaker, Windblade recovered and got Metroplex to crush Starscream, allowing Optimus and Megatron to finish him off. As the smoke clears, Optimus questions Windblade on how she survived, but she seems to have no idea.

After the Combiner Wars, Optimus watched the reconstruction efforts. Not wanting to overstay his welcome and preferring to leave Cybertron's leadership in its existing hands, he bid farewell to the Mistress of Flame and Windblade and departed for parts unknown. On the way, he received a vision of future events from the Matrix and headed back towards Metroplex City. There, he met up with Megatron and told him of his vision, believing that the Combiner Wars and Trypticon's attack were signs of a greater threat, one that would lead to their ultimate destruction. Megatron laughed off his concerns, and the two parted ways.

Optimus made his way to the Primal Basilica, where he found Perceptor standing over the Mistress of Flame's battered corpse. Unable to do anything for her, Prime activated the Basilica's defenses as a means of stalling Trypticon. Learning from Perceptor that Rodimus had given up the Matrix, the two entered the chamber of the Chorus of the Primes to have the Matrix returned to him. However, Optimus revealed the Matrix was not for him, but rather for Perceptor, as he wanted to make sure it would be taken as far away from Trypticon's grasp as possible. He guided Perceptor to a secret exit from the Basilica and sent the scientist on his way. Warned by the Chorus to "beware the power of the Primes", Optimus charged back towards the battlefield and began attacking Trypticon, rescuing Victorion. Optimus led the Combiners in battle against Trypticon, but the Titan managed to hit him, sending him hurtling towards some sharp rubble. Thankfully, he was caught at the last moment by Fortress Maximus.

As the two Titans battled, Optimus found Megatron watching the fight and demanded he assist them, but Megatron refused. When Trypticon swallowed the Enigma of Combination and took control of the Combiners, Optimus attempted to attack them as a distraction, but he was caught and the Combiners attempted to pull him apart. Optimus managed to break free of his captors and was further saved by the timely arrival of Megatron. Against Optimus's wishes, Perceptor returned and tricked Trypticon into swallowing the Matrix. However, this ultimately proved successful, and Trypticon released all that he had swallowed during the conflict before falling inert once again. The relief was short-lived, though, as Megatronus suddenly appeared before them, proving Optimus's fears. Optimus and Maximus attempted to surprise attack Megatronus, but he brushed off their blows and fired a beam through Optimus's chest, killing the Autobot once more.

Power of the Primes

Ultimately, thanks to his connection to the Matrix and the Primes, Optimus's spark was freed from the Well and revived after Megatronus's defeat, to the joy of his companions. Mourning the sacrifice of Megatron, whom he considered a brother, he commended Optimal Optimus for being a fine choice as the new Matrix-bearer, and began teaching him the ways of Cybertron, promising to support him in his new leadership role. 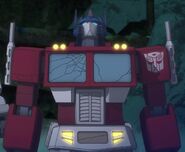