Orange Yoshis are color variants of Yoshi, first appearing in Game & Watch Gallery 3. Their first appearance in a Super Mario title was in Super Mario Sunshine, as a rideable companion.

Mario can ride Orange Yoshis in Super Mario Sunshine. In this game, all Yoshis are green and become a different color only after eating fruits. If Yoshi eats a Pineapple or a Papaya, he turns orange. While he is orange, Yoshi's juice turns enemies into platforms that remain stationary.

In Mario & Luigi: Superstar Saga, Orange Yoshi is seen in the Yoshi Theater as one of the main NPCs. During this game when feeding him a Bean Fruit he lays an orange Neon Egg.

One of the colors that the Yoshi Kid can hatch as is orange with blue hair and green pants. This colour of Yoshi can be obtained if the player waits 11-15 minutes after getting the egg, then hatches it by batting the Armored Harriers.

An Orange Yoshi appears in Paper Mario: Color Splash in The Emerald Circus as one of the Yoshis that can attack Mario. It uses its tongue to attack, and can eat one of Mario's cards.

In Yoshi Touch & Go, an Orange Yoshi will appear if the current Yoshi reaches 10,000 yards in Marathon mode. It can hold up to 50 eggs.

An Orange Yoshi later reappears in Yoshi's Island DS, and is only playable on the sixth level of each world, replacing the Brown Yoshi from the original game.

Orange Yoshi reappear in Yoshi's New Island. Like in the DS game, he is only playable on the sixth level of each world.

Orange Yoshi appears in Yoshi's Woolly World as an unlockable wool Yoshi. Orange Yoshi can be unlocked, along with five other wool Yoshi's, by completing World 6-8: King Bowser's Castle.

In Mario Kart 8, Orange Yoshi appears as an alternate skin for Yoshi. It is available though buying the Legend of Zelda and Animal Crossing DLC packs and is the staff ghost for GBA Cheese Land.

In Game & Watch Gallery 3, an Orange Yoshi appeared as a playable character in the modern version of Greenhouse. In this game, they had to defend the plants from the incoming Fly Guys and the Ukikis.

Orange Yoshi should not be confused with Brown Yoshi, who appears in Super Mario World 2: Yoshi's Island and the Game Boy Advance port on every sixth level.

In Super Mario Galaxy 2, if Yoshi eats a Dash Pepper, he changes his color to a bright red color that looks nearly identical to an Orange Yoshi. 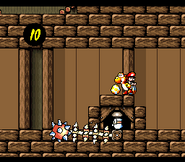