Order of the White Lotus

Order of the White Lotus

Sharing knowledge and philosophy.
"The quest for truth above all else" (creed).

The Order of the White Lotus is an ancient and formerly secret society that transcends the boundaries of the four nations, seeking philosophy, beauty, and truth. They are devoted to the sharing of ancient knowledge across national and political divides, and on Avatar Aang's request, they also concern themselves with the task of finding, training, and protecting each new Avatar.

Formed centuries earlier by the wisest scholars from all over the world, the Order began as a club where these ancient masters could challenge one another on the Pai Sho table. They derived their name from the white lotus tile used in Pai Sho, a key element in their strategy. They communicate membership through the game by placing Pai Sho tiles on the board in a specific manner, forming a bloomed lotus bud with the lotus chip in the center.

The Order of the White Lotus maintained a low profile until Grand Lotus Iroh gathered its members to liberate Ba Sing Se during the passing of Sozin's Comet at the end of the Hundred Year War. After they helped Sokka, Toph, and Suki by lending them an eel hound in order to arrive at Phoenix King Ozai's airship base, Iroh and Jeong Jeong utilized the power of Sozin's Comet to increase their firebending during the liberation while they worked in conjunction with Pakku utilizing waterbending, King Bumi utilizing earthbending and Piandao utilizing hand-to-hand combat. Shortly after the Hundred Year War's conclusion, the society stopped concealing itself from the public eye, and began to serve the world and the Avatar more openly.

Toward the end of his life, Avatar Aang commissioned the Order of the White Lotus to train and watch over the next Avatar until he or she had completed his or her training. After investigating many claims in both the Southern and Northern Water Tribe, all of which turned out to be false, they traveled to the Southern Water Tribe upon Tonraq and Senna's invitation, and finally discovered Korra to be the next Avatar.

After the discovery, the White Lotus directly oversaw her development and training of each element at a compound in the Southern Water Tribe.  Acting as her bodyguards, White Lotus sentries were sent to remain with the Avatar on Air Temple Island to watch her actions as she commenced her airbending training under Tenzin's tutelage. At their quarters, the sentries spent a large part of their time listening to the pro-bending broadcasts on the radio. Korra took advantage of the sentries' distraction to leave the island twice, much to Tenzin's annoyance.

As the Equalists attacked Air Temple Island during the battle for Republic City, the White Lotus sentries bravely confronted the Equalist attackers. They launched a barrage of firebending, earthbending, and waterbending attacks, and with the help of Lin Beifong and Tenzin's children, they managed to defeat the first wave of invaders. The tides quickly changed, however, when more Equalists arrived on the island. Realizing the battle was lost, the inhabitants of the island fled by sky bison. Though outnumbered, the White Lotus sentries remained behind in order to give Team Avatar enough time to escape on Naga. However, the sentries were captured and placed in line with other captured benders, awaiting the removal of their bending at the hands of Amon. After the Equalists were defeated, the sentries' bending was restored by Korra using energybending.

Iroh, a lover of Pai Sho, was a Grand Master and a Grand Lotus of the Order who often advocated that Pai Sho was "more than just a game". Piandao was also an important member of the Order; he offered his student Sokka a white lotus tile as a parting gift, which was symbolic of his membership in the Order. The image of the white lotus on the hilt of Sokka's sword and on the doors of Piandao's estate were also references to Piandao's membership.

Shortly before the arrival of Sozin's Comet, Master Pakku King Bumi and Jeong Jeong also accompanied Iroh as members of the organization, although none had shown symbols of the Order when Team Avatar saw them before. Other members were also visible in the campsite.

Seventy years later, the Order was no longer a secret society, and was instead dedicated to protecting the Avatar during their training. Many more members were present in the Order than in the past, including a leader and many sentries that are lower-ranking members of the Order tasked with duties such as guarding the Avatar. 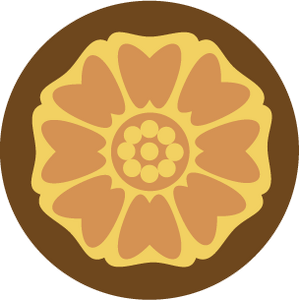 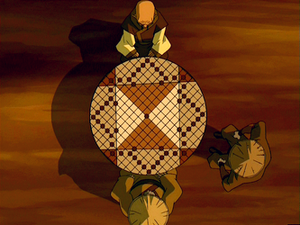 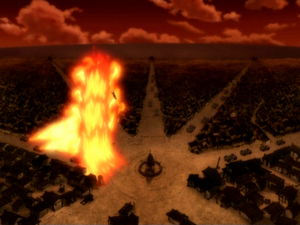 Jeong Jeong fighting dozens of tanks in the Lower Ring.