To find the Dual Glaive and bring the end of the Arathim Wars (succeeded).
Have a child with Shoni (succeeded).
Protect and save Rian from the Hunter (failed, but later succeeded when Naia and Gurjin rescued him).

Rebellious Parental Figure
Ordon is a supporting character in The Dark Crystal: Age of Resistance and the main protagonist of the first prequel comic arc, The Quest for the Dual Glaive. He was the father of Rian, husband of Shoni, and a war hero.

He was puppeteered by Dave Chapman, with Mark Strong providing his voice, the latter who also played Merlin in Kingsman.

In the prequel comics, Ordon appears as the main protagonist of the "Search for the Dual Glaive" Arc, he is married to a woman named Shoni, who disliked her husband being away on the battlefield. No matter how much he tried, Ordon found it hard to be away from combat due to his need to protect Shoni. One day, Ordon was given the chance to become the Captain of the Guard, having been approached by SkekVar, but Ordon declined.

In search of the Dual Glaive that is supposedly hidden in the caves of Grot, he became friends with his travelling companion, Fara, who helped him find the quest. Finally winning the first battle of Stone-in-the-Wood, Ordon split the Glaive in half and entrusted the other half to Maudra Argot. He was titled as "Ordon the Spitter Slayer" and labelled a war hero. At some point in time, Ordon eventually accepted SkekVar's offer to becoming the Captain of a Guard.

Soon, Ordon's wife gave birth to Rian. Shoni, hoped that Ordon would fit the role of father for their son, who would be one of the reasons Ordon would stay from the battlefield.

As captain of the Guard, Ordon grew distant from Rian, despite their closeness when his son was younger and treated him more of a soldier than his child. One day, Ordon goes to lead the Skeksis lords SkekLach and SkekOk to Ha'rar for the annual tithing ceremonies until Rian and Mira approach him with news that an Arathim soldier was seen in the castle. However, when Ordon reveals he left his second-in-command, Tylon in charge because of Rian's childish nature with Mira. Ordon's son nearly wants to tell his father of the Arathim, but determined to prove himself, Rian hopes to gain his father's approval and goes after the creature, and neglects to tell his father of what happened. Ordon leaves for Ha'rar, where he announces the Skeksis' arrival, but the arriving party also includes the All-Maudra's youngest daughter, Princess Brea, who has embarrassed her family.

On the return to the Castle of the Crystal, Ordon is informed that his son and Gurjin conspired with each other and that Rian murdered Rian. He goes to the Skeksis, aksing for them to spare his son  and decides to dreamfast with Rian when he finds him. However, SkekSill fills Ordon's head with lies that dreamfasting with Rian will cause who ever does so with him will spread madness. Feeling his son is not well, Ordon asks for the Skeksis' permission to find his son and bring him back to the castle. SkekSo deceives Ordon into thinking that they will use the Crystal to "heal" Rian of his "affliction." Ordon leaves for Stone-in-the-wood, where he has already informed Fara of the Skeksis' lies. When Rian appears to Fara, he is shocked to see Ordon has already arrived and intends to capture Rian. The young Gelfling scolds his father for believing the Skeksis over his own son; using his wit, Rian escapes.

Ordon eventually finds Rian again in a podling tavern and dreamfasts with Rian and a group of other Gelflings (Tavra, Naia, and Kylan) and learns the truth. The two reconcile, causing Tavra to tell her allies to go to Ha'rar while she, Naia and Kylan go to rescue Gurjin. However, Ordon and Rian are suddenly chased by SkekMal, who was sent by SkekSil to hunt down and capture Rian and the vial he has in his possession. Ordon later gives his life to protect Rian by tackling SkekMal onto a field of gobbles, which eat Ordon and SkekMal alive. However, Ordon's sacrifice was in vain, as SkekMal survives and kidnaps Rian.

Following Ordon's death, SkekSil later mocked Rian for his father's death, reminding him that Ordon, like Mira and Gurjin, sacrificed so much so Rian could live. Eventually, Ordon's death was not in vain, for Gurjin and Naia rescued Rian from captivity and honored his father's loss, informing his friends of what happened. He later sympathized with Brea, by revealing his own strained relationship with his father, as much as she did with her mother. Rian finally realizes that his father did truly loved him.

Ordon's death was later avenged when SkekMal's Mystic counterpart UrVa committed suicide to put an end to the Hunter's reign of terror.

Selfless, fatherly and caring, Ordon was a strict Captain, expressing he wanted his soldiers to be disciplined and bound to their duties. He even expected this from his own son, Rian, whom he mostly saw as a soldier rather than a son. Rian admitted his gather was not always the fatherly type. His strict personality is what led father and son to both have a strained relationship. He deemed his son and his lover Mira as immature and Rian unfit to lead and probably expected more from Rian that Ordon's other men.

Before the series, Shoni sees how dutiful Ordon is to his job on the battlefield and wished he could find any other role than a soldier. However, Ordon really wanted what was best for his family. He went on the battlefields to protect Shoni and he pleaded for mercy to the Skeksis emperor, SkekSo, falsely believing Rian was not in his wrong mind.

There was a softer side to Ordon, as he loved his family and willing to protect them at all cost. Though he loved his wife and son he was blind to the fact that there was more to him then a soldier and Ordon was slightly insensitive to their feelings.

Near the end of his life, Ordon was willing to the take the risk of dreamfasting with Rian. Upon realizing that his son was correct and that the Skeksis were the ones responsible, father and son reconciled with each other. Later, Ordon selflessly sacrificed himself to ensure his son's survival. 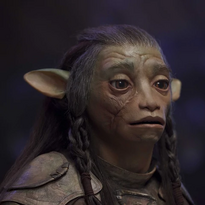 Ordon with Rian and Mira.