Find and kill Efreet to avenge her parents. (formerly)

Origami Tobiichi is one of the main heroines in Date A Live. She is a member of the AST (Anti-Spirit Team) who holds a grudge against spirits, due to the her parents' death at the hands of a spirit. She later becomes a spirit herself, and is later revealed to be the one who killed her parents, as she learns.

Origami is a top student in her school both in terms of academics and sports. Of course, none of the student body and facility members know that she is a member of the AST with a few exceptions unknown to her. Origami is a very skilled wizard but can lose herself in her emotions when it comes to dealing with Spirits in combat.

For unknown reasons, Origami is romantically interested in Shido. Her devotion towards him causes her to develop stalking habits such as sniffing his gym clothes. Shido is also the only person not related to any military institutions who knows that Origami is part of AST. For some reasons that have yet to be explained, Origami trusts Shido to the point that it would seem as if she was taking orders from a military commander, in other words, following his every command to the letter.

It's revealed in volume 10 that she went to the past with the help of Kurumi to save her parents. She attacked Phantom who at the time was believed to be the one who killed her parents. This proved incorrect when she saw her own attack hit and destroy her parents. She then realized that the enemy was herself all along, thus causing her to experience great, negative emotions and caused her to go inverse as the time traveling ended.

Origami is shown as a young female with short, silvery-white hair arranged in a bob cut with three hair-clips in the left part of her hair. She has blue eyes and wears the girl uniform like her female classmates when at school.

However, in her AST Combat Wiring Suit, her appearance is more fierce. Origami's clips are not worn, instead a pair of sensors are attached to her hair with armor covering her from shoulder to hand as well as part of her body and legs but not thighs. Her chest is seen at the top of the transparent suit as well as revealing her belly.

After becoming a Spirit, her eyes turned from blue to light blue and white.

Origami is a girl that rarely openly talks with other people unless needed with only a few exceptions such as Shido Itsuka and Tohka Yatogami. She isn't a shy person, but more of an unsocial type of person.

She can be a bit reckless or aggressive if she has a goal or purpose to fulfill, she's also willing to do something someone else wouldn't to accomplish such goals as shown when she did everything Shido asked of her when he was trying to get her to not like him which shocked everyone around her.

Due to a Spirit killing her parents 5 years ago Origami has an intense hatred against all spirits, whenever she sees a spirit she loses all of her common sense and tries to kill it any way she possibly can. This hatred is shown to be strong enough that she was willing to kill Kotori despite the fact she knew she was Shido's sister and he pleaded for her to not kill Kotori.

As the series progressed, Origami has shown a growing desire to obtain power. This eventually caused her to join DEM, and later, after she was defeated, to accept a sephira crystal that turned her into a Spirit.

Although disgusted that she became what she had always despised, Origami seemed satisfied that she finally gained the power to fight evenly against Spirits. She thus decided that she would become the Spirit that kills the other spirits, and then would end her own life when her job was done, but the event caused her to be unable to face Shido after she transformed into a Spirit, immediately flee, despite the fact that she was in the middle of using her strongest attack against Tohka.

After finding the truth of her parents' death, Origami suffered an emotional breakdown and Inversed. In this state, Origami is emotionally dead and completely unresponsive to everything around her, not even Shido is capable of getting to so much as speak a word out of her, and compared her to a corpse. Kurumi also noted that she had fallen into an unrecoverable state. This Origami continues to exist into the new timeline, as all of her memories are retained, the New Timeline Origami eventually inherits her identity after resolving her emotional issues.

Because Shido prevented the deaths of Origami's parents by her spirit self's hands, Origami never "entrusted" him with her emotions and became an avenger, as such the new timeline's Origami is a more cheerful girl, even questioning at times if it was actually right for the AST to try to kill Spirits. She was shown to be quite a bit more shy and, for lack of a better word, normal than the old Origami when it came to Shido asking her out on a date, where she found herself constantly trying to find the best way to reply to it. She also has no idea about the fact that she has spirit powers, which were inherited from the old timeline alongside her memories.

However, while the old timeline's Origami does continue to exist within her, she is suppressed for the sake of her own sanity, due to the catatonic state of mind that version of her is still stuck in. Old Origami manifests often during her date with Shido through rather perverted and/or stalker-like actions, much to her confusion, embarrassment and even horror. When she senses Mana, her original self's hatred of spirits takes over and she immediately transforms into her inverse form. Later, when the new Origami actually meets the original Origami and fuses with her, it is finally possible for Shido to save her from her unrecoverable state. It's revealed that the old Origami personality never actually loved Shido, but depended upon him, but the new Origami did come to love him on their date.

Following this event, Origami regains her memories from the original timeline, cuts her hair short again, but she lets go of her long time grudge against spirits and "reclaims" the emotions she entrusted to Shido five years ago. She also admits that she is now genuinely in love with Shido, and will not surrender to Tohka, as she states that, while she no longer hates spirits, she, the Angel, is still the Princess's enemy for this reason. Oddly, realizing her true feelings for Shido rather than just having him as an emotional crutch for her sanity has made Origami even more blatant in her already stalker-like tendencies to gain his affections. This is very likely to be either a result of simply knowing no other way to act around him, or evidence that she is now even more obsessed with gaining his attention than she was before.

As of the new timeline, she also has debates in her mind represented by an Angel and a Devil that try to decide which action to take. Surprisingly, the Devil is the reasonable one while the Angel tries to make her follow her desires. The Angel is represented by her old timeline's appearance, while the Devil is represented by her new timeline's appearance when she had her long hair. Their debates often lead to Origami loosing focus towards reality quite often and are the possible explanation for some of her behavior.

Five years ago, before the main story of Date A Live, both of her parents are killed by a spirit. This event in Origami’s life led her to join the AST in order to seek revenge. She also seems to have met Shido once at some point before the series, and developed feelings for him (and started stalking him on a regular basis).

As a wizard, She was the vanguard and current "Ace" for the AST. Her skills as a member of the AST were noted to be quite phenomenal, as she was the only one who at first could manage to fight a spirit close quarters(although she still lost), and she was also the most extreme, hoping to kill Yoshino by first dropping a building on her dome. She managed to utilize the CR-Unit White Licorice, which is noted to be very dangerous and difficult to handle, in fact no one else but her has proven to be capable of using it long enough to actually put it to practical use. She was even able to land a hit on the world's most powerful Wizard, Ellen, which Ellen herself considers worthy of praise. Finally, using Mordred she was capable of destroying a satellite bomb alone, a task which previously took Shido and multiple (most of them sealed and one injured)spirits' their combined powers to destroy. Likewise she was able to pressure the (Sealed) spirits into a corner with this unit, but ultimately she was still no match for Tohka when her powers were unsealed.

As a Spirit, Origami is able to fight on par with Tohka at full strength despite the AST's spirit mana detector calculating that her spirit mana was slightly weaker than Tohka's. Origami's spirit powers appear to be of long range type, attacking her enemies from a distance with lasers of shining light and creating some distance between them when they get too close. She has also shown the ability to fly.

Her Angel is a set of golden pillars that surround her and, when put together, resembles a large crown. The pillars can shoot out lasers of shining light from their tips which have proven strong enough to pierce Tohka's Astral Dress when she does not create a barrier around herself. Tohka has also claimed that even if she does create a barrier around herself the lasers would still be able to pierce through. The various pillars can also take on various formations and each of these formations have shown to have special abilities.

So far, Metatron has displayed the following formations:

Finally, Origami has shown the ability to transform herself into light and teleport herself. This (unnamed) ability automatically activates when she is about to be hit by an attack and teleports her to a safe distance. However, the position she is going to be teleported to can be predicted and intercepted. Also, after teleporting herself she cannot dodge an attack by teleporting again in quick succession. Tohka theorizes that Origami either can't teleport continuously or that she can't teleport away from an attack she cannot see coming beforehand.

After prolonged exposure to negative emotions when she found out that she was the one who killed her parents, Origami transformed into her other form, which, according to Wescott, is the true form of spirits in the bordering dimension.

While in this form, her Astral Dress and attacks become darker in color.

Origami has no control over her body in this form, attacking everything and everyone in sight. However, this could also be because of the shock she suffered when she found out the truth. 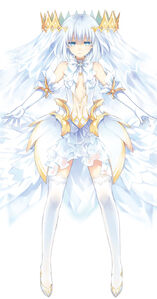 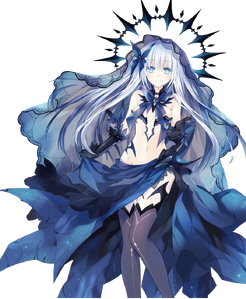 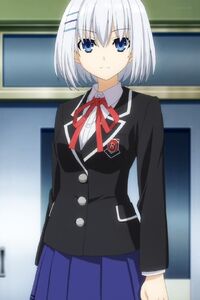 Origami in her school uniform
Add a photo to this gallery

Retrieved from "https://hero.fandom.com/wiki/Origami_Tobiichi?oldid=2233888"
Community content is available under CC-BY-SA unless otherwise noted.