Animals
Orion is one of the protagonists of Ginga Densetsu Weed: Orion, Ginga: The Last Wars and Ginga Densetsu Noah. He is the second oldest son of Weed and Koyuki.

Despite being one of Weed's sons, Orion has a selfish attitude and a foul mouth, he even calls Cross an "old hag", to her horror. He is the rudest and loudest of his siblings. However he also looks up to his uncle Joe. Orion may be rude, but he is smart and strong. He is violent and impulsive, he also has a strong sense of justice. He seems to get hot-headed when fighting and Orion was willing wanting to see Masamune die in front of him for Izō's family, and not for the honour of the Ou army.

Orion's behavior is a combination of his own personality and other teachings. His uncle, Joe taught him that he must never surrender in front of the enemy, and Izo taught him that enemy do not deserve pity and they can kill without mercy. Also to the fact that he had inherited Riki's strictness and his uncle's stubbornness.

In the Last Wars, it appears Orion is jealous of his Older and Younger brothers, Sirius and Rigel. He thought that he still acts like a puppy because he believes that he would never gain his father's or grandfather's respect because of how obnoxious he is to the rest of the cast at times.

After Hybrid Bear's death, Orion and his siblings are born in the Futago cell in the early fall, at the end of the series. Daisuke Fujiwara named the puppy.

Orion and his siblings have become famous, as they are superintendent puppies. They learned from Kisaragi's ability to catch crabs.

Orion lives with his family in Ōuu until the volcanic eruption surprises them.

Orion's troops return to Ōu and join there with Gin's troops. Sirius quickly visits Orion with his parents who are in the care of a man. Weed is joining the rest of us with the improvement of his foot.

Orion is at the beginning of the story at Akame Mountain with a one-year training session together with Sirius, Rigel, Andy and Bon. Yamabiko arrives from Shikoku, where adult friends meet for the first time in half a year. 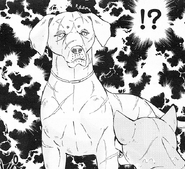 Retrieved from "https://hero.fandom.com/wiki/Orion_(Ginga_Densetsu_Weed:_Orion)?oldid=1855987"
Community content is available under CC-BY-SA unless otherwise noted.