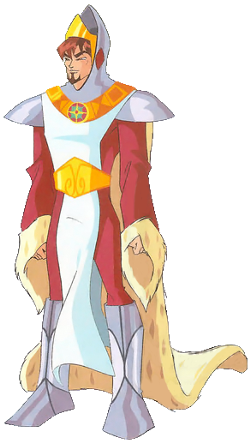 King Oritel was Bloom's biological father and the King of the planet Domino (Sparks in the 4Kids version). His belovid wife is Marion and his two daughters are Bloom and Daphine.

King Oritel is the current ruler of the planet Domino, alongside his wife, Queen Marion. Not much is known about his personality, though it has been revealed in the second film, that he can be a very stubborn, traditionally-minded person. He cares deeply for his family, and is grateful to Mike and Vanessa for raising his younger daughter Bloom. Oritel and Marion were presumably brought together by an arranged marriage, which (revealed in the second movie) is a long upheld tradition in the Domino royal family, his approximate age is unknown.

Retrieved from "https://hero.fandom.com/wiki/Oritel?oldid=1710446"
Community content is available under CC-BY-SA unless otherwise noted.