Practicing Senjutsu, going to movie theaters, guiding crews and people through the Amazon

Elderly Martial Artist
Oro (オロ Oro?) is a character from the Street Fighter series, first appearing in Street Fighter III: New Generation. He is an old Japanese hermit who has mastered the secrets of eternity and survives from 140 years.

Oro is a mysterious, supercentenarian hermit whose powers gave him an extremely long life. He lives in a cave somewhere in the Amazon Jungle with many different animals, including a dog and a turtle. When Oro was younger, he used to be a martial arts instructor in Japan. He moved to Brazil in the early 1900s with a friend of his. His life in Brazil wasn't going very well and he eventually became a recluse. He spent most of his time practicing Senjutsu, a style made up of techniques used by the immortal mountain hermits in Taoist myth. After many years, Oro became a master of the style.

Oro became bored one day and decided to embark on a journey to find a student worthy of inheriting his fighting style. He decided to enter the third World Warrior tournament, and sat atop of airplanes to travel to various locations. After defeating many fighters, he encountered Ryu. After defeating him, Oro dropped out of the tournament and decided that Ryu was a potential successor. Later, Oro eventually found Ryu and began observing and aiding the young warrior's training, all while remaining undetected. Ibuki had to fight Oro once as a test to pass her ninja school graduation exam. Oro was disappointed when Ibuki challenged him because he thought she was asking him for a date.

Oro is depicted as an ancient hermit with thin black hair, golden skin, crimson eyes that glow light blue during battle and is barefoot. His only prominent article of clothing is a large single torn red tarp like cloth, belted with a rope and appears to be like a Kesaya or Chiton like robe draped over his left shoulder and tied at a knot.

Oreo is an easygoing guy with a sense of humor about himself. One of the things he does in his spare time is help guide people through the Amazon jungles, and he's also interested in video games. Likewise, while he may be one of the most powerful street fighters in the history, but he also has the brains to go along with the brawn. In his spare time, it's also hinted that he studies advanced mathematical theory outside of practice. Also invoked with his fighting style, as his limited capabilities demand players to work around and study his dynamics. He claims his style requires the study of heaven and earth, meaning to realize their entire scenario and situation, arena, fighting style, and anything else, taking up the street fighting philosophy to a whole new level.

Oro on a tarot card (courtesy of Capcom artwork collection) 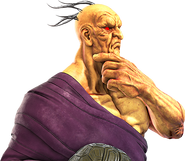