Preach and Spread Christianity in Pagan Nations, Destroy the Book of the Law to save Christianity, Help Touma in any way she can, Serve the Anglican Church

Priestess, Pure of Heart, The Messiah

Orsola Aquinas (オルソラ＝アクィナス Orusora Akwinasu) is a nun-in-training and is a major supporting character in A Certain Magical Index. She is a magician and once served under the authority of the Roman Orthodox Church by decoding various books and codes and also preaching and spreading Christianity all throughout Pagan Nations.

She once tried to use her decoding abilities to decipher and destroy the Book of The Law prompting the Roman Orthodox Church to go after her and force her into refuge in Academy City. She's since then defected to the English Puritan Church and now serves as a member of Necessarius for protecting her and is an ally and assistant of Touma Kamijou. Orsola herself still remains a devoted Roman Catholic and is devout to the faith but currently serves the Anglican Church instead.

Orsola's name istelf is the Italian form of Ursula meaning "Little Female Bear" and may be a reference to Saint Ursula. Her name Aquinas is most likely a reference to the famous Christian Theologian of Thomas Aquinas.

Orsola's exact true age is left unknown but she appears to be of the same age as Touma's, a teenager. Despite her young and teenage appearance, she has very mature features on her body including large breasts and a very adult-like womanly figure as revealed in her attire. She wears a traditional Roman Catholic nun robe/habit along with white gloves and a head dress/wimple that covers her head. Her habit is unmodified unlike Agnese'. Beneath her robe Orsola wears a long white robe beneath her habit that covers her underwear and has short blond hair and blue eyes.

Orsola is a very kind and gentle person in general. She is always being forgiving and is very merciful and selfless as well. This is demonstrated when she has a positive and kind interaction with Agnese Sanctis despite being a victim of hers. She is also very charismatic as demonstrated when she made a speech to the Agnese Forces about the Roman Orthodox Church and the forces that helped her and when she made a speech to the women of Necessarius about the upcoming war and what stance they should take. Her speech skills and charisma stems from how she spent much of her time preaching and spreading Christianity all throughout predominately Pagan Nations. Orsola also acts as an airhead as documented by Touma with her behaviour and is very childish but can be serious sometimes. She is devoted to her Christian faith as she remains a Catholic despite serving a Protestant institution and even went as far as to destroy the Book of The Law just to save Christianity which got her in trouble.

Orsola has a secret sid to her which she says that there's many sides to women in general to Touma. At first, Orsola was originally suspicious of others and would monitor them in secrecy until she found nothing wrong about them and would then accept their kindness. She did this prior to her defection and also obeyed the orders of the Catholic Church's higher-ups but eventually discovered a dark truth and defected once she tried to decode the infamous Book of the Law to save Christianity. Once running into Touma however, she realized the faults of her character and changed. Despite this however, Orsola is a very kind and generous person who can make friends with strangers easily like that of Sherry Cromwell. Orsola is also very religious which is obviously shown in how she's a nun and is still devout to her Catholic faith even if she serves the Anglican Church (a Protestant institution) and even revealed to Touma that the Roman Catholics were being manipulated by the church's leadership and they aren't all that bad which helped Touma have a better view with Catholics and helped them become allies with them.

Not much is known about Orsola's past but she appears to have spent much of her childhood serving Angelene, Lucia, and Agnese Sanctis olives for over three days as implied by Angelene. Orsola traveles aorund the world and has been preaching in three Pagan countries and has been spreading Christianity throughout the lands making her renown with the Roman Orthodox Church. Despite this however, she still refers to herself as a Nun-in-training.  She managed to get decoding abilities at an unknown point in time and has been living in Italy for sometime.

Orsola originally met Touma when she was fleeing into Academy City and she had to stay with him for a while. She acts very kind around him and is thankful that he was there to save her when she was kidnaped by the Amakusa Christians. Following her rescue, she becomes an ally of Touma and is very helpful and supportive of him. Orsola also takes in Touma and Index when they go on vacation to Italy and even helps them when Biagio Busoni tries to destroy Venice for its ties to Academy City. Orsola was also there to support the Amakusa in stopping Acqua of the Back once he had incapacitated Touma.

Orsola had knew Agnese since they were little kids. She first met them when the Roman Orthodox Church took them in when they were very young and she ended up feeding them olives for days. Years later when Orsola grew up into a teenager, she was being tracked down and hunted by Agnese for her treason against the Roman Church authorities and she ended up getting kidnapped. Eventually she was saved however, Agnese and her subordinates were sevearly punished and Orsola couldn't stand by so she helped them and eventually rescued Agnese and her friends and all three of them defected to Necessarius. Orsola also forgave Agnese for the past incidents realizing her faults.

Orsola Aquinas was first introduced to the Amakusa-Style Remix of Church when she was kidnapped by them. She was also tied up and gagged by the Amakusa Members and was to be sent off with them to an unknown location via a magic teleportation spell. In reality however, the Amakusa were very concerned for Orsola as they had kidnapped her only so that the Catholic Church wouldn't execute her for her treasonous acts. Eventually, she was able to forgive them and helped them during their battle against Acqua of the Back.

Orsola and Sherry appear to be close friends. This is no surprise because of her kind nature and is shown where they're at the British Library researching the Croce di Pietro and found out that it was being set up in Academy City. it's assumed that the two get along rather well.

Orsola is a more non-action character in the series to due her pacifistic nature. She isn't immensly powerful but is sutible enough to be an important ally to Touma, his friends, Necessarius, and English Church. Despite her limited powers, her natural abilities are turely her greatest strengths and are valued by people like Touma.

Touma rescuing Orsola from Agnese and her forces

Orsola with Agnese in the United Kingdom 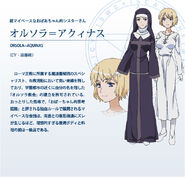 Orsola with her new cross from Touma

Orsola Aquinas
Add a photo to this gallery

Retrieved from "https://hero.fandom.com/wiki/Orsola_Aquinas?oldid=1694364"
Community content is available under CC-BY-SA unless otherwise noted.