Oscar is a tan lizard who is the titular main protagonist of the TV series Oscar's Oasis. He lives in a non specific desert.

Oscar is a lizard gecko living in a desert that has features from several different real deserts, like the Sahara desert, Kalahari Desert, and North American deserts. He always gets into trouble with the trio (consisting of Popy, Buck, and Harchi) and the chickens too.

If Oscar finds anything interesting, the trio will usually try to take it from him, and in turn Oscar himself will often earn the trio's wrath when he attempts to steal food or drinks from them. Oscar will often hunt flies (though mosquitoes in the Ooohhhasis cartoon shorts), with varying success and also often tries to steal eggs from the chickens. The latter however is very dangerous as the chickens respond very aggressively to the little lizard and they won't resistate to peck him to death.

Although Oscar is somewhat selfish, he will help out others as shown when he helped Harchi find Popy and Buck in "Lost" and the Dung Beetles when they had trouble rolling some dung. Unfortunately due to his stature and sometimes his hunger as well, he finds himself on the bottom of the food chain, making his daily quest for survival all the harder, and he's only rarely tolerated by the other inhabitants of the desert, who mostly tend to see him as a nuisance at best and a snack at worst.

Oscar however is very determined and never gives up. In times of danger, Oscar will frequently lose his tail, but fortunately it always quickly grows back. And through his poor luck he frequently ends up tangling with the trio; even when he's trying to do something completely unrelated to them. His intelligence varies from episode to episode however he is usually portrayed as being unintelligent. He can, however, be extremely clever and despite his lowly rank in the food chain he is capable of survival and often shows off his survival skills such as when Harchi was alone with him in Lost and proved to be far more competent than Harchi could ever be.

One particular exception to Oscar's lowly position in the desert hierarchy is the Skunk. Whereas all the other desert dwellers fear the skunk for his stench, Oscar is unbothered by the smell and frequently tries to befriend the skunk, much to the Skunk's annoyance. He frequently finds water or food but usually loses it in the end such as with water bottles breaking and then drying up on the sand or with the flies getting out of him and leaving. He seems to be unaffected by stench as shown when he is smothered in the Skunk's armpit and shows little to no reaction to the smell. Oscar's goal changes from episode to episode, but his usual goal is to find food or water at all costs. Although Oscar typically doesn't like to clash with the other desert dwellers he has shown that if he wants something bad enough he will fight for it despite his small frame. He's also proven that he does not like being cheated out of something promised to him and will give those who do so a taste of their own medicine.

Although Harchi will sometimes bully the little lizard by shooting him away with a slingshot or other such antics, the two of them can sometimes get along; particularly when Popy's influence is not strongly present. "Lost", "Toothbrush Tussel" and "Day of the Chicken" are all examples where Oscar got along well with the hyena.

Buck when left to his own devices will often just ignore Oscar but will bully him when he is with the rest of the trio. In "Follyball" Oscar was roped into playing volleyball on Buck's team. And though initially disinterested, he turned out to be a surprisingly good player when it turned out the lizardette was involved. As this helped Buck to win, the vulture was most grateful. (Much to Oscar's dismay, as this kept him away from the lizardette)

Oscar and Popy in the end have a negative relationship. And though Oscar is generally willing to be friendly with the trio, Popy tends to cheat him whenever he does. Oscar does not take this lying down though! Oscar, always on the lookout for a tasty snack, will frequently try to raid the trio's camp. And Popy does not take particularly well to this. However the trio themselves will also often try to steal whatever Oscar might have found. Both mutual or even separate interests Oscar and the Trio might have tend to make them cross paths and intervene with each other, and particularly Popy will readily get irritated at the little lizard whenever this happens although sometimes they get along.

Though Roco generally doesn't like the desert animals and will chase Oscar away as often as the trio, the two have occasionally bonded a little. Particularly as Oscar is usually willing to help the dog get his stuff back whenever he loses it to the trio. Though the trio are more likely to be a problem for Roco, Oscar in his own right will sometimes interfere with his cargo or try to steal eggs, and Roco doesn't appreciate this. Roco once thought he had accidentally hit Oscar with his truck, and tried to protect him to make up for it in My Bodyguard. Unfortunately for Roco, Oscar being ever the opportunist, used the dogs protection to steal from just about all of the animals in the desert, causing the dog to be the target of these animals' wrath. For his part Roco didn't appreciate being a pawn to Oscar's greed.

Oscar and the Skunk's Relationship

Though Oscar has a sense of smell and can be attracted to the smell of food, such as fried eggs, his sense of smell is clearly not offended by the skunk's stench. Though the skunk likes to terrorize other creatures with his stink, this fails on Oscar, who in fact quite likes the skunk, and tries to make friends with him frequently when he is present. The feeling is not mutual and the skunk will frequently try to do anything to avoid the little lizard, although he once tolerated Oscar in exchange for a piece of watermelon. This may be because Oscar himself doesn't smell that great, however that's a subject for debate.

Oscar and the Meerkats Relationship

Though the meerkats will sometimes stick to their own and prove not to be to tolerant to Oscar's presence, he has on occasion gotten along with them. Even once or twice becoming a hero to them.

Oscar and the Chickens Relationship

The chickens are one of many challenges in Oscar's life. Though they often have water, and nearly always will have eggs, both of which Oscar wants, they'll also fanatically peck at the little reptile and will frequently send Oscar scurrying for life and limb (which can cost him another tail on occasion.) Even on occasions where he's not hungering for their eggs they will attack him without mercy.

Oscar and the Crocodiles Relationship

Like all desert animals (save perhaps the skunk, whose stench protects him from them), Oscar fears the crocodiles. One crocodile however once mistook Oscar for her own hatchling, and in typical Oscar fashion, the little lizard capitalized on the opportunity of having a crocodile protector. Like the chickens, the crocs also have tasty eggs which Oscar would love to get a hold of!

Oscar would very much like to impress the lizardette. Of course, he has mixed success at this, and even when she decides she likes him, Oscar's bad luck can very well mess things up for him. She's often not particularly impressed with Oscar's various antics, and this spurs him to find ways in which he can impress her. Which of course may well put him in conflict with the trio! She also has displayed a distaste for his body odor as well and the only real time she showed interest in him was when he had sprayed himself with perfume in "Sweet Smell Of Success".

Oscar and the Dung Beetles Relationship

The Dung Beetles are Oscar's friends in the show, and help Oscar in many things. They become a more major element in the episode "Revenge of the Small Fry" where four Dung Beetles struggle to roll a ball of dung and Oscar helps them. They offer Oscar their might to get him a banana from the Trio, which he failed to get before helping them, all appears to be going well, when Oscar is discovered helping them and is knocked out while the beetles are trapped. Oscar however rescues them making them even more grateful to him.

However, he was captured by the Trio and the four retreat. Later we see Oscar in a cage with the Trio asleep when Popy is awoken by a sound she looks to see the dung beetles only to realize that a whole army of them had come to rescue Oscar and punish the Trio. They give the grateful Oscar the banana and they become allies though this alliance isn't ever shown again.

Junior is Oscar's adopted son. He only appeared in the episode "Junior". When he hatched, he was innocent and active. When he got bigger, he became more protective of Oscar and more vicious to those who oppose him or Oscar. He gets greedy when it comes to looting but not towards Oscar.

Oscar and the Viewer Relationship

Oscar is sometimes seen winking at the end of the episodes in ("Lizard in the Sky") when he falls from the balloon and begins to fall cans of corn comes to the screen and winks with a cob in the mouth. In ("Firefly Flash") when you make friends with a chariot and you see a circle around your face take advantage of doing it as thanks 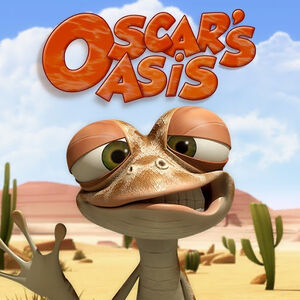 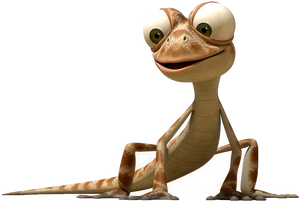 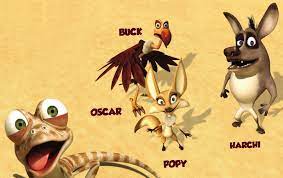