Working at the farm

Training with Ozpin and Ruby

Prevent Salem from getting the Relics and ending the world. (ongoing)

Oscar Pine is one of the main characters in RWBY. He is a young farmhand whose Aura and soul combined with those of Ozpin, making him the current incarnation of the warrior Ozma.

He is voiced by Aaron Dismuke, who also voiced Alphonse Elric in the English dub of Fullmetal Alchermist.

Oscar's home was with his aunt on a farm somewhere in the Kingdom of Mistral.

Daily Life on a Farm

One day, Oscar wakes up from a dream and begins doing chores around the farm.

After he finishes his work and heads back into the barn with his tools, he notices something strange in the mirror. Looking at his reflection, he nervously calls out "Hello?". After a pause, he hears Ozpin introduce himself and flies backward into a stack of hay. His aunt calls out from the farmhouse and tells him to be careful with his tools.

In the middle of the night, he refuses to follow Ozpin's orders to leave the farm and go to the City of Mistral.

Journey to the City of Mistral

An unspecified amount of time later, Oscar decides to leave the farm and begin his journey to the City of Mistral. He encounters Hazel Rainart, who Ozpin tells him is not someone to be taken lightly. He boards the train and sees an advertisement for Haven Academy.

After arriving in Mistral, he finds Qrow Branwen in a tavern. Ozpin pressures him to talk, so he asks Qrow to return Ozpin's cane. Oscar accompanies a drunk Qrow back to the house in Mistral where he and Team RNJR are staying. At first, the team are confused and very suspicious of Oscar's unexpected appearance. As the inebriated Qrow incoherently rambles, claiming "[he] found him", Oscar introduces himself to the team as Oscar Pine and Professor Ozpin.

Oscar sits as Team RNJR wonders about his identity. He shares quite an awkward moment with Ruby Rose, saying he never met Huntsmen before with Ruby responding saying that she has never met a person with two souls as well and she told him that it was a first time for all of them. Then, Oscar gives Ozpin control over his body and is present mentally when Ozpin reveals his true nature. Ozpin plans that the group gather more Huntsmen and train before ensuring the safety of the Relic of Knowledge. As a part of this, Oscar questions what Ozpin means that Oscar must strengthen his body and Aura.

Oscar trains with Team RNJR outside. He practices hand-to-hand combat with Ruby only to be knocked down after not engaging his Aura. He gives Ozpin physical control, and after Ozpin spars with Ruby, Oscar is visibly tired from the energy spent. He learns the difficulty of training his Aura and that he can eventually unlock his Semblance with enough practice.

One night, Oscar trains by himself with Ozpin’s cane in the training room when Ruby comes downstairs. He admits he feels as if he has had the weapon for more than a lifetime. After Ruby encourages him that he will be ready for combat in no time, Oscar admits his fears of the inevitable conflict. When she tries to cheer him up, he bursts in anger as to how she seems so calm in the midst of all the chaos surrounding her. After Oscar calms down, Ruby shares how she lost two of her dearest friends - Penny Polendina and Pyrrha Nikos. She admits she is frightened because Salem is willing to kill both her enemies and innocent bystanders, but she is moving forward in memory of her fallen friends because they would have done the same for her. As she goes back upstairs, Ruby acknowledges Oscar for his bravery and perseverance. Ozpin remarks that despite Ruby’s faults, she possesses a spark to inspire others even in dark times. Oscar concludes that their situation is tough on Ruby, to Ozpin’s agreement.

On a later day, Oscar watches as Ruby reunites with two of her old teammates - Yang Xiao Long and Weiss Schnee. After the former Beacon students have dinner together, Oscar allows Ozpin to take control and catch up with everyone about what they have learned. When he regains control of his body, Oscar finds himself touching Yang’s shoulder and pulls back nervously.

One morning, Oscar tells Qrow that Ozpin wishes to speak with him.

On the night of the full moon, Oscar and his allies travel to Haven to meet with Lionheart, and they are ambushed by Raven Branwen, Vernal, Hazel and Cinder's faction. As fighting breaks out, Oscar walks to Lionheart, reveals himself as Ozpin's host and begins to attack. Throughout the fight, Oscar is on the offense, but the fight abruptly stops when Weiss is fatally impaled by Cinder Fall.

Finding Ruby knocked out by Emerald Sustrai, Oscar knocks Lionheart away and rushes to Ruby's side to wake her up. But he is soon attacked by Hazel after his identity as Ozpin's reincarnation is exposed by the Haven Headmaster. Even when he is at a great disadvantage, Oscar refuses to let Ozpin take over because he needed to fight. When he learns about the death of Hazel's younger sister Gretchen, Oscar defends Ozpin by stating that she made the choice of becoming a Huntress. He then loses consciousness when Ozpin commandeers his body.

After the battle concludes, Ozpin rests within Oscar's consciousness, with the young boy telling Qrow that he used up too much energy fighting. Oscar then tells Qrow one more message from Ozpin - that they need to get the Relic to Atlas, before losing consciousness from exhaustion.

Oscar is a boy who is short in stature. His skin is tanned, and has blushing and freckles on his cheeks. His hair is an unkempt umber with green undertones, and his eyes are hazel, the main iris being forest green, with accents of burnt orange and yellow around the pupil.

He wears a dirty and scuffed white top that laces across the chest. The sleeves are rolled up to his elbows, and there is a pocket on the left tricep. His olive pants are held up by orange suspenders, and are tucked into worn, brown boots. The pants are patched over the knee, and a quilted cloth hangs loosely out of his left pocket. His hands are covered by orange gloves, with green straps overlapping across the back of the hand in an X shape, and around the wrist. His neck is wrapped with a torn bandage, though it's noted to not be covering a wound.

In Argus, Oscar bought new clothes; replacing his old farm outfit. Oscar now wears a clean white shirt with black slacks. While he does retain his gloves and boots, they are now cleaner. Over this Oscar wears a green coat with an orange cover on the back.

Oscar seems to be of a calm and passive disposition; and generally seems to enjoy his life as a farmhand, working on his chores as soon as he wakes up. He works with a visible smile on his face, implying he enjoys his work.

When Ozpin makes contact with him, he initially brushes off any of Ozpin's requests, wishing to instead remain as a farmhand and not accepting Ozpin as anything more than a voice in his head. However, in "Kuroyuri", he gives in and begins his journey to Haven Academy. According to Ozpin and later stated by himself, Oscar desires to be someone more than just a farmhand.

Oscar seems uncomfortable in new social situations, as shown when he approaches Qrow Branwen on behalf of Ozpin and first conversing with the members of Team RNJR. His slow pace of speech and looking down while talking suggest awkwardness when engaging with strangers. Oscar also sounded nervous when Ozpin mentions he must strengthen his body and Aura and struggled at first to converse with Team RNJR.

Though he trains diligently under Ozpin's tutelage from within him, Oscar is incredibly frightened at the prospect of the world going to war again. After conversing with Ruby and then Oz, Oscar appears to have taken a great step in conquering his fears of war, as Ruby disclosed to him the reason why she fights, transferring a piece of her unquantifiable spark to Oscar. This shows his progress in becoming the warrior that he is meant to be, taking one step at a time.

Despite his training molding him into the disciplined warrior that he will become, Oscar is not without a sense of empathy and compassion even towards his enemies. In his battle with Hazel Rainart he attempts to empathize with the emotionally wounded man despite Ozpin's advisement that Hazel had been too broken for too long to listen to reason. This shows evidence of Oscar's own take on Ruby's inner spark and philosophy of kindness, extending a healing hand even to a sworn enemy.

His Aura is fused together with Ozpin's and has access to the former headmaster's memories.

In "Unforeseen Complications", it is revealed that Oscar can temporarily relinquish control of his body to Ozpin. However, this ability only lasts for a specific period of time as Oscar is still present mentally in his body. While Ozpin is in control, Oscar's physical body appears to gain the dexterity and motor control of Ozpin and is able to leap and flip in the air. However, once Oscar regains control of his body, he loses this level of coordination.

Due to Ozpin's reincarnating and merging with Oscar's soul, Oscar will eventually gain all of Ozpin's martial prowess. Oscar has thus far rapidly developed considerable skill and familiarity in the use of his cane as a weapon, with Ruby and Jaune both noting his startling progress over the course of his training.

By "The More the Merrier," Oscar has become formidable enough to take on Leonardo Lionheart in a one-on-one duel. Oscar's fighting style has taken on many of the qualities of Ozpin's, particularly his speed, his rapid transition between offense and defense, and his tendency to switch between using one of and both of his hands when striking with his cane. He is also shown to possess an impressively strong defensive Aura cloak, being able to tank a direct hit at near-pointblank range from Leonardo's Dust projectile shield with little discernible effort if any at all.

In "Necessary Sacrifice", Oscar claims he has fought the occasional small Grimm before. 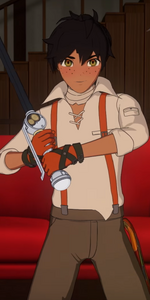 Oscar in his farmhand attire 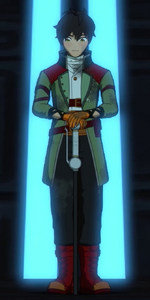