Your Majesty (by Jinbe)
Mommy (by Shirahoshi)

Speaking in the public square.

Ensure a peaceful future between fishmen and humans.

Ensure that the future generation of fishmen do not grow up hating humans.

Queen Otohime is a minor character in the manga and anime series One Piece. She was the mermaid queen of the Ryugu Kingdom, the wife of King Neptune, and the mother of Fukaboshi, Ryuboshi, Manboshi, and Shirahoshi. Eight years prior to the start of the series, she was assassinated by Hody Jones.

She was voiced by Michiko Neya (who also voiced Vinsmoke Reiju in the same series) in Japanese version and AmaLee English.

Otohime was a regular-sized mermaid, in stark comparison to her husband and daughter. She had golden blonde hair which was held up in loops, along with green eyes and thick eyelashes. She would often wear a long white kimono dress.

Otohime was an extremely loving, peaceful, and forgiving woman who was loved by her family and her people. She was an avid supporter of Fishmen rights and against their mistreatment by humans, but unlike other Fishmen such as Fisherman Tiger, who wanted humans to remain separate from Fishmen, Otohime avidly supported the coexistence between Fishmen and humans.

To this end, she would go out into the public and give speeches on the streets, attempting to get signatures from civilians for petitions of interspecies relations improvement, though unfortunately would never get any signatures. Regardless, she still continued her efforts for several years in the hopes that peace could be achieved between the two species.

Otohime was a very merciful and kind individual, never hating anyone no matter what offenses they might have made. Otohime did her best to have others let go of their hatred and ensure that the children to not inherit hatred towards humans either. Even as she was on the verge of death, she did not hate the man who shot her and begged her children not to hate her killer either.

At some point during her life, she met and married King Neptune, becoming the queen of Fishmen Island and bearing four children: Fukaboshi, Ryuboshi, Manboshi, and Shirahoshi.

During her time as queen, she was one of two people who took an active stand against Fishmen prejudice, the other being Fishermen Tiger. While Tiger believed that Fishermen and humans should remain separate, Otohime preached for cooperation and coexistence between the two species. To that end, she would go out into the streets and give speeches to the people, attempting to have them sign petitions for coexistence between the two species, though she would never get any signatures.

When a thief attempts to steal money and holds a child hostage, as he is surrounded by the authorities, Otohime arrives at the scene. The criminal shoots at her, but she dodges the bullets and slapped him to the ground. After knocking him to the ground, she listened to his reason and his family, and while touched by his desire to help his family, nevertheless explained that his actions were wrong. Her words convinced the thief to become a better person and surrender himself to the authorities.

Otohime was present with King Neptune when Fisher Tiger returned from his adventures. When King Neptune asks what he experienced, Tiger only replied "humans". Otohime is brought to tears by his words, and when talking with King Neptune later on, she explained how she was able to hear a voice in his heart, raising a battle cry. After Tiger was killed, Otohime became more determined than ever and continued her efforts to support existence between Fishmen and humans. After five years, she managed to get a thousand signatures, though eventually these signatures would be rescinded. Driven to despair, she became drunk, and while intoxicated, gave a speech to the Fish-men Island citizens through a broadcast radio.

One day, a giant ship carrying World Nobles arrived at Fishman Island with severe damage, with a faction of the Sun Pirates standing outside the ship. One of the World Nobles, Mjosgard, recognized the pirates as his former slaves and demanded they return as slaves, the enraged pirates attempt to kill him, but Otohime arrives at the last second and shields the man, wounding herself in the process. When they asked why she protected him, Otohime replied that while their anger was justified, they couldn't shoot him while the children were watching and pass their hatred onto them. Though the crowd calmed down, the world noble held her at gun-point and demanded medical attention. Shirahoshi was horrified and cried out, unknowingly summoning Sea Kings to the scene, which caused Mjsogard to faint. Otohime then requested that the World Noble be healed.

A few weeks later, Mjsogard left Fishman Island, but to the shock of everyone on the island, Otohime revealed she was going with him in order to meet with the other World Nobles and negotiate with them. A week after, she returned to the island and revealed that she'd managed to undergo some negotiations with the World Nobles for peaceful relations with the humans. Finally, after several years of hard work, the citizens of Fishman Island begin to sign her petitions, bringing her to tears.

In a shocking turn of events, the boxes that contained the petitions suddenly caught fire, and in the ensuing confusion, Otohime was fatally shot. Her children all stood at her side as she slowly died, but as they saw her death, she begged her children not to bear any hatred for the person who killed her, no matter who it was, and for her three sons to protect Shirahoshi. Her family and the people of Fishman Island deeply mourned her death, and when Hody Jones claimed that a human killed her, it further fanned the flames of hatred against humans. 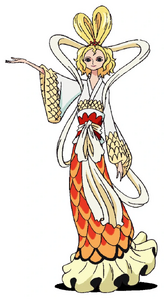