She is a Pop type idol, and her favorite brand is Happy Rainbow. Through the events since her debut, she is known as the one who pushed herself the most putting Ichigo Hoshimiya and Mizuki Kanzaki beside, created her own idol unit Powapowa-Puririn and create two versions of its debut song, and eventually succeeded Mizuki as the Starlight Queen.

Otome has ginger hair and vermilion eyes. Her hair is tied into two buns (chignon), which has an appearance similar to drills. She is only depicted wearing a Starlight Academy uniform.

Otome has a bubbly personality. She adores cuteness and often adds "Love You" or simply "Love" to almost every sentence. She speaks in first-person and generally uses the honorific "-tan" (e.g.: Ran-tan, Sakura-tan) when referring to her friends. Like Ichigo, she is very carefree and has a immense love for cute things, such as kittens and rainbows and is air headed. Otome is a very hard worker, and she will train for at least a year in advance. In episode 11, it was thought that she has a crush on Suzukawa, but it was his necklace she fell in love with. Even though Otome is somewhat clumsy like Ichigo, she fears that she will make a mistake during the real thing. Otome always performs with all her heart.

Otome is the mascot character of the popcorn brand Pop'n Popcorn.

She lives and grew up at a kindergarten school that her mom and dad opened and has helped out after graduating to elementary school.

Note: This section is based from the anime series.

Takes place in the tenth episode, Otome first appeared when Ichigo, Aoi, and Ran walked together to school, they saw Otome in a fountain trying to catch a rainbow. She introduced herself and Aoi quickly recognized her.

Once they make their way to the hallway of the school, they found out Ichigo will be dueling with Otome for the Christmas special live, and then Ichigo managed to win, and Otome said she was glad and had fun albeit how she cried, only to hear Johnny announce a Revenge Live for those who lose the duel.

The day before the Revenge Live, Otome tried to climb a tree to save a black cat, but she falls. Suzukawa, the school's gardener saved her, then Otome screams "Love You!" and keeps staring at him since, making Ichigo and the two felt something suspicious, and so they tried to look after Suzukawa's life out of the school. The next day, Otome reveals that what she loved of Suzukawa was his cat necklace. Then Otome managed to win the Revenge Live.

It is almost Christmas Eve, and Ichigo invites her friends and classmates to have a Christmas party. They started by cooking and decorating, and then Ichigo found a girl known as Yuna Nakayama, who isn't that hyped for the party. Then Ichigo decided to cheer her up by cutting down a huge tree along with her friends and put it near the school's dormitory. Just when Ichigo wanted to decorate it, Ran and the others notice if they will be late for a last training for the Christmas Special. Their classmates appear and ask if they could decorate them, and so Ichigo, Otome, Aoi and Ran rushed to the stage.

After the performance, the four checked and found Yuna had got into the tree they cut and meeting her parents, which made Otome cry.

After the new year, Otome and Ran exchanged stories about their holiday. Otome showed a mascot she found during her trip, and just after Ichigo entered the scene, she saw how "cute" she looked, doubled Ran's surprised look. Otome appeared later, training in the track, and so Ichigo run overcome her. Few days later, Otome appeared again eating Pop'n Popcorn on the watchers' seat while Ichigo pushing her best on the track.

After the audition of "Naughty Detectives 3" announced, Otome participated as a combatant, but she failed.

Otome (おとめ, Otome) is often written in kanji as 乙女, which means young lady or maiden. 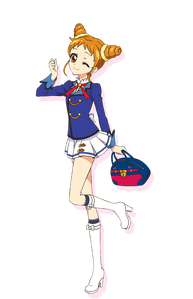 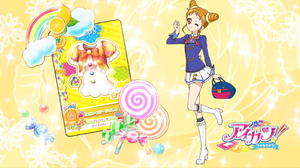 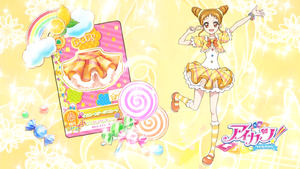 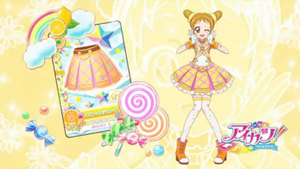 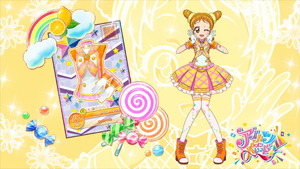 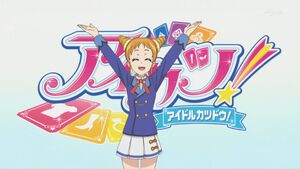 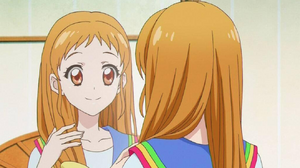 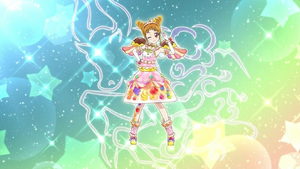 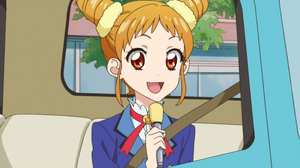 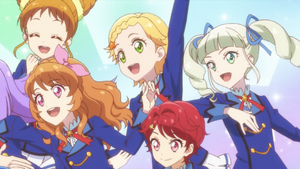 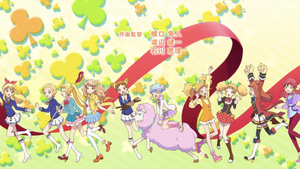 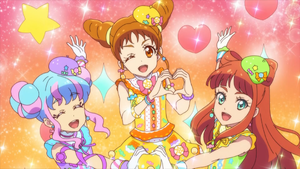 Add a photo to this gallery
Retrieved from "https://hero.fandom.com/wiki/Otome_Arisugawa?oldid=1724847"
Community content is available under CC-BY-SA unless otherwise noted.