Being a ladies' man.

Defend humanity from the Fangire race.

Save Maya from the Checkmate Four.

He was played by Kouhei Takeda, who would go on to portray Kazumi Sawatari in Kamen Rider Build.

Otoya Kurenai is Wataru's father who battles the Fangire menace in 1986, his ideology that "All humans are music" his reason of fighting Fangires was to protect that music. Otoya is a ladies man who retires from being a professional violinist for reasons unknown. It is by accident that he interferes in Yuri Aso's mission and is eventually brought into their group as a result. Though normally a casanova, Otoya is vexed on anything marriage related, things always staying the same, and others getting in his way. He was the first to learn Jiro is actually a Wolfen, although no one believes him until later when Jiro threatened Yuri and reveals himself. He then becomes the second user of the Ixa System when Jiro was exposed, putting up a front of not suffering the suit's side effects.

He is also capable of reasoning with Fangires (and the other Demonic Races) who are not truly evil, an example being that he befriended Ōmura/Frog Fangire as he convinces him not to harm others. During his battle with the Fangire Race, Otoya falls in love with Maya, the original Queen of the Checkmate Four, resulting in the chain of events that led to him becoming the second Dark Kiva after forming a pact with Kivat-bat the 2nd to take on the Fangires' King. Otoya, with help from a time-traveling Wataru, succeeds in destroying the King at the cost of being on the verge of death due to the strain of wielding Kiva's power. After assuring Wataru along with Maya before parting with him, Otoya would then pay final visits to his friends Yuri and the Arms Monsters (seemingly as a ghost) before finally dying in Maya's arms after playing her favorite song. He would leave behind the Bloody Rose, a violin that Otoya himself made with Maya's help, for Wataru.

However, in a strange turn of events in 2008, Otoya's spirit makes his appearance when he suddenly finds himself in Wataru's body. During that time, he recognized Megumi and Kivat as the children of those from his time and also starts building a new violin with Wataru unaware that his father is building it through him. He would appear to Wataru in spirit one final time, encouraging his son not to give up as he lives on through him. He was later mentioned by his future grandson Masao whom he was compared with Otoya. In the non-canon The Queen of the Castle in the Demon World net spin-off movies, Otoya is brought into the present and bought the Café mald'amour, renaming it the "Café Otoya D'amour" and attempting to remodel it.

Otoya is a strange and eccentric womanizing man. While on one hand he has ruined the lives of others through his antics, he has also helped others change their lives for the better. Some of these people he helped change like Omura, Jiro and Maya remember him fondly and respects him greatly. Despite his oddness, Otoya is hinted to have a lot of life force with in him as he managed to live despite having his life energy drained by Castle Doran itself. He also managed to transform into Dark Kiva (also managing to transform into Ixa once then badly being beaten by the Bat Fangire between his second and third transformations) three times despite Maya stating that a normal human will die after becoming Dark Kiva even once. Although he isn`t exactly the best role model, his son also respects him greatly and wished to meet him. When they do indeed meet, and Otoya learns that Wataru is his son, Otoya in his own way acted as a father for Wataru showing how much he can care for others. Even after sacrificing himself to stop the Bat Fangire, Otoya continues support his son through spirit and encouraged him to not give up when Wataru was fighting the revived Bat Fangire.

Otoya initially had little experience in fighting but soon learned more as he joined Yuri and the gang as he fought Fangires. His strength was fully shown when he, along with his son, managed to defeat the Bat Fangire despite it`s seemingly overwhelming powers.

Save Mode (セーブモード, Sēbu Mōdo) is the mode used by Ixa mostly in the year 1986 in one of its early prototypes.

Although the Ixa System prototype was present in 1986, it had only Save Mode as Burst Mode was still in development. As such, technical problems were frequent like the armor shooting out steam, a constant beeping, a different tone of voice for the Ixa Belt, a bronze projection for the Ixa System's transformation and the availability of only one Fuestle: the Knuckle Fuestle. The Ixa Prototype Version exhausts a qualified person's body considerably even if they are not human, as the System still managed to harm both Jiro and Rook despite being a Wolfen and Fangire. It even harmed Otoya to the point of total memory loss.

Dark Kiva only appears to have one form, similar to that of Kiva Emperor Form in black and red. However, Dark Kiva does not require the use of a being such as Tatsulot to achieve this form, and has no chains on his body as Kiva needs to control his power. As Dark Kiva, the King has access to a unlimited potential of power that is hindered within his successor such as telekinesis and the use of the Kiva insignia as a weapon.

As Maya would later explain, the Kiva power cannot be used by a normal human, as usage would ultimately result in death. This would prove to be true, as Otoya had used the Dark Kiva power a total of three times before finally dying due to the strain it put on his body. Shima also mentioned this when Wataru revealed his heritage to him. 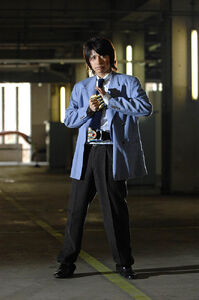 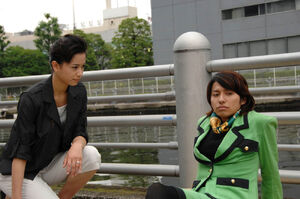 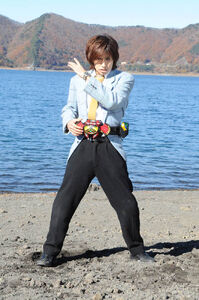 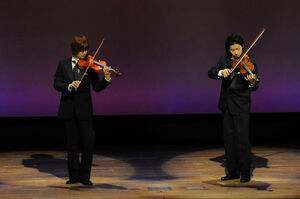 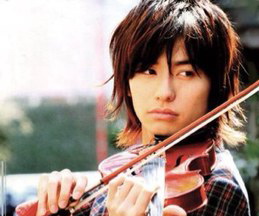 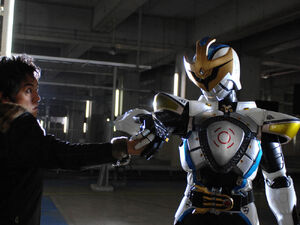 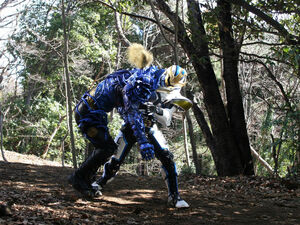 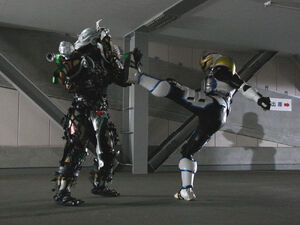 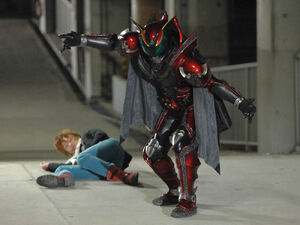 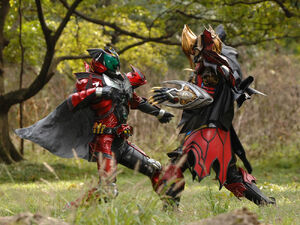 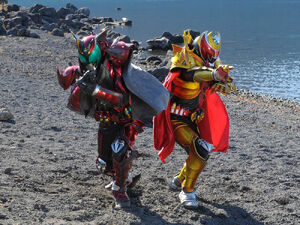 Otoya fighting alongside his son Wataru. 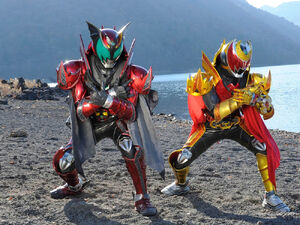 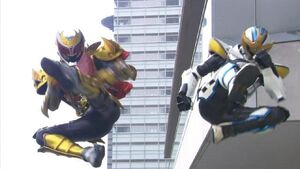 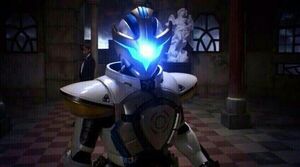 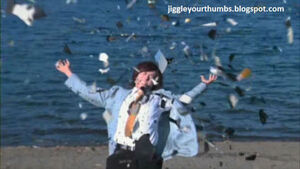