Otus is friend of Timmy and characters in Timmy Time.

He is a owlet. He has magenta feathers and a yellow beak.

He is very sensitive and sometimes copies his father in doing everything he does. He likes to play with toy trucks. Otus is a bookworm. Otus always bring an apple for Osbourne and Harriet Heron every morning. Otus loves to help Osbourne. 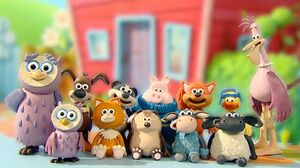 Retrieved from "https://hero.fandom.com/wiki/Otus?oldid=1561588"
Community content is available under CC-BY-SA unless otherwise noted.