Defeat the Decepticons. Win the race.

Ransack and the Decepticons

Leader, Robot
Override is a major protagonist in transformers Cybertron. She is the leader of the planet Velocitron, and after meeting the Autobots from Cybertron, particularly Hot Shot and Optimus Prime, she joined them on their quest for the Cyber Planet Keys to close the Unicron Singularity.

In Landmine, Hot Shot and Red Alert spotted Override when they first came to Velocitron. She overtook them both on the road, leaving both Autobots shocked at her incredible speed.

During a regular race on Velocitron, Override was making everyone else eat her dust when Megatron introduced himself to the Velocitronian leader. The Decepticon asked her where he could find the Cyber Planet Key, and Override challenged him to a race for the information. Megatron accepted, but Override took the victory in a photo finish. Afterwards, she admitted she didn't actually know about the artifact and had just wanted to race a new challenger. Megatron promised that he could tell her all about the Planet Key if she managed to beat him a second time, then took off.

Due to being the best racer on Velocitron, and being the leader of the planet Override seemingly embodies the culture itself. She is quick-witted, decisive, self-sure and always looking for a challenge. This has its upsides and downsides: while she's brave and determined with a never-give-up attitude, she can also be cocky to the point of arrogant, if not selfish and shortsighted. She entered the great race for leadership by lying about her gender and posing as a male, and has been defending her title and proving herself more than a match for anyone since.

She has developed a close bond with the human girl Lori, referring to her as "Little Sister", which Lori reciprocates by calling Override "Big Sister". 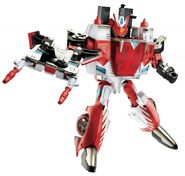