Educating his friends.
Talking about his relatives.

Wise Animal
Owl is an aged wise owl who likes to tell stories and can be very serious, although most of time he is just calm and even has a happy-go-lucky attitude at times.

For unknown reasons, however, after Piglet's Big Movie (2003) Owl ceased to appear in other Disney productions, thus becoming the only main character of A.A. Milne's books to be absent in the CGI series My Friends Tigger & Pooh. Some have speculated, however, that Owl's role as a character to which the others turned to for advice did not fit the nature of My Friends Tigger & Pooh, in which the Super Sleuths work to solve the Wood's problems. Owl did, however, return in the 2011 Winnie the Pooh film.

Owl appears in the 2018 live action film Christopher Robin where he, along with his friends, reunite with a now adult Christopher Robin. He is voiced by English actor Toby Jones (who also voiced Dobby).

Songs by Owl include: 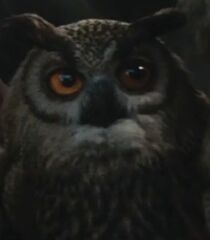 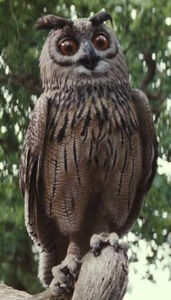