Gentle Giant
Ox-King (牛魔王, Gyūmaō) is the king of Fire Mountain, the widowed father of Chi-Chi, the father-in law of Goku, the maternal grandfather of Gohan and Goten, and the paternal great-grandfather of Pan. He once trained with Goku's adoptive grandfather, Grandpa Gohan, under Master Roshi at the Turtle School.

Despite his threatening sounding name, Ox-King is actually a quite docile and good-hearted man. He became somewhat demonic when his castle became engulfed in flames on Fire Mountain during a picnic with his only daughter, and wreaked havoc through the village at the foot of the mountain. In the anime, he has a few large roles though from time to time, mainly involving keeping his daughter out of trouble. He also cares deeply for his family, buying his grandchildren presents and visiting quite often, and will stop at nothing to make sure things are done, such as protecting Chi-Chi's wedding gown from the fires surrounding his castle.

Though generally very polite and generally disinterested in girls, Ox-King is shown to have a perverted side similar to Master Roshi's when watching Maron sunbathe in the episode "Krillin's Proposal". The Ox-King is a smoker, as seen on the cover of the chapter "An Unexpected Strength", in the first Dragon Ball Z ending sequence, and in the episode "Gohan Goes Bananas!".

The Ox-King is a strong martial artist who trained under Roshi alongside Grandpa Gohan long ago.

Ox-King survives from bullets being shot at him. 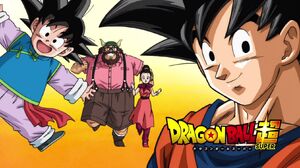