Pacha is the deutaragonist of Disney's The Emperor's New Groove, a supporting character in it's 2005 film, Kronk's New Groove and a major character in The Emperor's New School. He is a very kind peasant, and family father. He helps the film's protagonist, Emperor Kuzco, to go back to his palace, under the condition that he won't destroy Pacha's village to build a pool. Though Kuzco shows little will to respect the deal, Pacha takes him home anyway, and the two develop a strong friendship. In the end, Kuzco is turned back to human and agrees to forget about destroying Pacha's village. In the TV series, The Emperor's New School, they are still close friends.

He is voiced by John Goodman in the movie and second season of the TV series (who also voiced James P. Sullivan from Monsters Inc. and played Fred Flintstone in the 1994 live-action Flintstones movie) and Fred Tatasciore in the TV series season 1.

In the video game he is voiced by Bill Farmer, most famous for his role as Goofy.

Pacha is an even-tempered peasant and family man, and a subject in the egotistic Emperor Kuzco's kingdom. His courage, tenderness, and value of both friendship and family assists Kuzco change into a sociable and obliging young man.

In The Emperor's New Groove, Pacha is summoned to the palace by Kuzco and is told that his house on the hill will be destroyed to make room for Kuzco's summer home. Surprised and appalled that the emperor could be so callous, he travels home to tell Chicha and his two children (Chaca and Tipo) that they have to leave their ancestral home. However, before he can tell them, he discovers that Kuzco has been transformed into a llama and dropped in the back of his cart. He is initially reluctant to help Kuzco, since the emperor seems to make it clear that he still intends to destroy Pacha's village. Over time, however, Pacha gradually helps Kuzco to start thinking of people other than himself, and he eventually cleans up his act. The two set out to turn Kuzco back to a human by getting to Yzma's lab. Upon returning to being human, Kuzco lets Pacha keep his village and even spends his summer vacation with Pacha's family.

Pacha has a supporting role in Kronk's New Groove, the movie that revolves around Kronk, but Pacha is one of Kronk's friends. In one scene he disguises himself as "Pachita", Kronk's mother-in-law.

In The Emperor's New School, he continues his fatherly role to Kuzco and lets the young emperor-to-be live with him and his family while Kuzco goes to school. He always gives Kuzco advice to help him out of any situation. For example, when Kuzco was transformed into a rabbit, he told Kuzco to "Make the best of what you've got," which in this case was speed. As a result of the events of the original film, Kuzco and Pacha share an attachment as both friends and surrogate father and son. 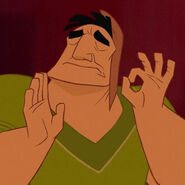