Heiress of the Northwest family

Taunting Mabel and her friends (formerly)

Win a sing-off against Mabel Pines (failed - had to bribe McGucket to be announced as winner).

Pacifica Elise Northwest is a supporting antagonist-turned-supporting protagonist and redeemed heroine of the Disney cartoon series Gravity Falls. She is the heiress of the Northwest family, the daughter of Preston Northwest and Priscilla Northwest, the descendant of Nathaniel Northwest, and the most popular girl of the town Gravity Falls, Oregon. Upon her debut, she was portrayed as an arrogant and sarcastic girl; however, in her later appearances as of "The Golf War", Pacifica begins to show signs of redemption and thus, begins to warm up towards Dipper and Mabel Pines and also becomes a potential love interest for Dipper.

She is voiced by Jackie Buscarino.

Pacifica first appeared in "Double Dipper" at the Mystery Shack's party, introduced as "The Most Popular Girl of Gravity Falls". She meets Mabel for the first time and the two join the singing contest, and though Mabel actually won, Pacifica cheats by giving money to Old Man McGucket so she wins the crown of the contest instead. However, this also begins her grudge against Mabel.

Her next appearance is in "Irrational Treasure", where she and her family are the guests of honor for the Pioneer Day event, as they are descendants of the supposed town founder Nathaniel Northwest. Later, Dipper catches up to the car, informing her that Nathaniel didn't found Gravity Falls and handing her the secret cover-up document, much to her shock as the car is driving away.

During "The Time Traveler's Pig", Pacifica appears at the Mystery Fair and makes a very rude remark towards Mabel. During one of the alternate timelines created by Mabel and Dipper's time-travelling, Pacifica is shown to have gotten to the weight-guessing game before Mabel and won Mabel's prized pig, Waddles. This horrifies Mabel, who convinces Dipper to go back in time and reverse the incident and thus Pacifica is seen being attacked by the chicken she won instead.

Her next major appearance is in "The Golf War". Pacifica and her family arrive at the mini golf course and challenge Mabel. Mabel cheats by making a deal with the Lilliputtians, but after she fails to return their favor, they attack everyone there, including Pacifica, who would be then rescued by the Pines Twins. At the end of the episode, she begins to warm up towards them.

In the episode "Northwest Mansion Mystery" Pacifica tells Dipper to help her family to get rid of a ghost of her Manor. After a long fight, Dipper finally catches the ghost in a mirror, who reveals that he was trying to make the Northwest family finishing the promise that they broke 150 years ago. Angrily, Dipper goes back to the party and tells Pacifica she is a liar, much to her sadness. Later on, she discovers all the bad things her ancestors did inside a secret room of the Manor and believes that she is nothing but just "another link in the world's worst chain". But because of Dipper encouraging her, Pacifica then finished the promise and the ghost finally rests. She and Dipper are last seen enjoying each other's company and joyfully mess up the Northwests' rug with their muddy shoes.

In "Weirdmageddon Part 1," Pacifica tries to stop her father from making a deal with Bill Cipher, and after his face is disfigured by Bill, she's horrified.

In "Weirdmageddon 3: Take Back The Falls", Pacifica is part of the resistance. She then takes part in the zodiac ritual by representing the Llama symbol but when the ritual fails (due to Stan's stubbornness, and due to Ford continuing to be ungrateful for Stan bringing him back to his home dimension) she is turned into a banner alongside Robbie, Gideon, Wendy, Soos and McGucket. After Bill is defeated, Pacifica is seen with her parents outside the sold Northwest Manor, and is shocked when her mother tells her that she can only have one pony from now on. She later attends Dipper and Mabel's birthday party where she bought each of them gifts, jokingly stating that she broke a nail while wrapping them. Pacifica's signature is seen alongside many other signatures on a note which was given to Dipper by Wendy as a parting gift so that he can remember all of his friends in Gravity Falls.

Originally, Pacifica was portrayed as a spoiled girl, often harassing anyone she deemed "weird". And like many jerk individuals, she had a tendency to cheat in contests and take great pride and arrogance in her family's namesake.

In "Golf Wars", while still retaining her arrogant portrayal and behavior, she begins to show signs of reformation when the Pines twins saved her life from the Lilliputtians, as Pacifica exclaims upon parting ways that she had fun. It is also implied in this episode that all of her actions are because of the neglection of her parents, as shown at the end of the episode when they only allow her to return to the mansion if she won.

Her most dramatic change of heart is displayed in "Northwest Mansion Mystery", where it is revealed that Pacifica is being manipulated by her parents, particularly by her father Preston, to act the way she is in the former episodes by "keeping in line with the bell", and basically being treated by her parents like a dog. After learning the many wrongful actions her family has committed, Pacifica atones for her past actions by allowing the regular folks into her family's social party. Afterwards, it is hinted that she has also begun to warm up towards the Pines twins, Dipper in particular.

In "Weirdmageddon 3: Take Back The Falls", while Pacifica still retains a change of heart, she 'threatens' to sue everyone if she gets hurt in the process of saving Gravity Falls (however, it is just to hide how afraid she is of the recent events). Despite this, she later teams up with the Pines to confront Bill Cipher, though is turned into a banner in the process. Pacifica is last seen attending Dipper's and Mabel's birthday party and even giving them nice gifts, showing that her bond with the twins had grown.

Pacifica's most prominent feature is her long, blonde hair, reaching down to her legs; Dipper once mistook it for a wig. Her primary outfit is a purple cardigan with a short lavender dress, alongside a purple belt. She also wears black leggings with cream boots. Her only sign of makeup is purple eyeshadow and she accessorizes herself with large, lavender hoop earrings.

In her episode of redemption. "Northwest Mansion Mystery", Pacifica starts out wearing a lake-foam green dress (much to her mother's disapproval of wearing sea-form) with darker green highlights. She also pairs the outfit with diamond earrings and a brooch. Her hair is notably wavier than in her previous appearances. She is however commanded by her father to change out of the outfit for one more appropriate.

Later in the episode, Pacifica is seen wearing a purple and burgundy dress with black puffed sleeves and gloves. Her earrings, while retaining the appearance of a diamond, have now changed shaped to appear as though they are two rhombuses fused together, which Pacifica eventually discards.

In the "Weirdmageddon" trilogy, Pacifica is seen reduced to rags for her outfit. She is later given a Llama sweater by Mabel as a means to represent the Llama on the zodiac, but eventually returns to her regular outfit at the Pines twins' birthday. 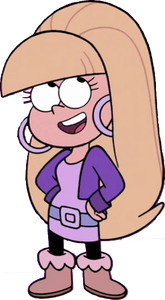 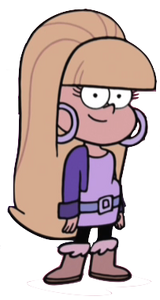 Pacifica in a green dress. 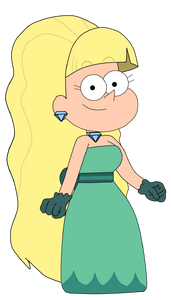 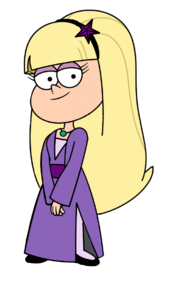 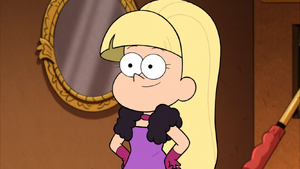 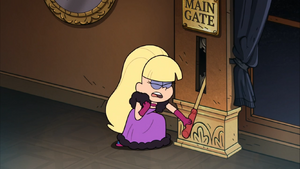 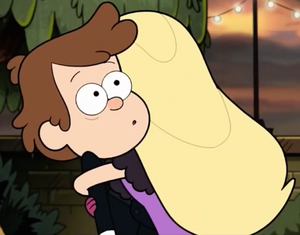 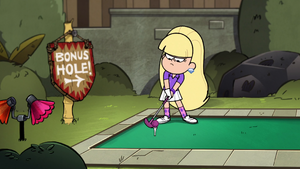 Pacifica in "The Golf War". 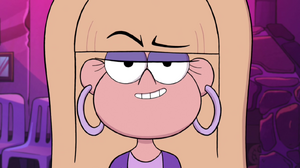 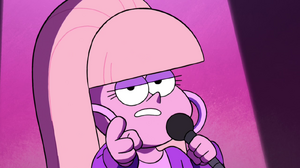 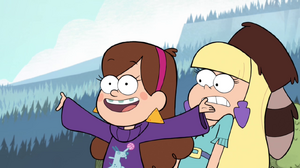 Pacifica is interrupted by Mabel. 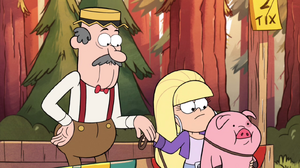