Aid her sisters in defeating Demons and protecting the innocent

Paige Matthews (August 2, 1997), is the youngest sister of the Charmed Ones, and one of the tree main protagonist of Charmed.

She is the wife of Henry Mitchell and the mother of their children, Tamora, Kat Mitchell, and their adopted son Henry Junior. Paige was adopted by Mr. and Mrs. Matthews after she was left at a local church shortly after her birth. She met her half-sisters, Piper and Phoebe Halliwell, in 2001 after the death of her eldest sister Prue Halliwell.

She was portrayed by Rose McGowan, and the late Donna Hardy as elderly Paige.

Paige's appearance changes quite a lot, although not anywhere near as often as her older sister Phoebe.

Paige is very similar to her deceased oldest sister, Prue Halliwell, in terms of personality. She is stubborn, strong-willed, and has issues with her (biological) father. One of Paige's main personality traits and something that she struggled with after becoming Charmed was her independence. For over 20 years, Paige went through life as an only child and attempted to retain her independence after finding her sisters, though she still loved them and considered them a blessing to her even if she sometimes had little disagreements with Piper because of how different they are much like Prue and Phoebe had. During her teens, Paige was a rebel like her older sister Phoebe. She used to smoke and at one time was an alcoholic. However, she matured heavily when both her adoptive parents died in a car accident.

With whitelighter inside of her, Paige has an inherent need and ability to help others, which led her to wanting to become a social worker.

Paige is not one for tradition or mainstream things. She prides herself on what she calls her "weirdness," and usually desires for her love interests to be "weird" as well. Paige also takes pride in being a witch, and wants to be with men who fully accept her heritage. 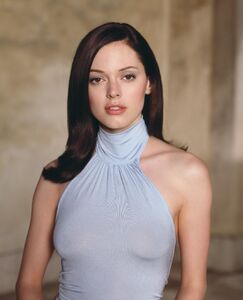 Paige in the comics.
Add a photo to this gallery

Retrieved from "https://hero.fandom.com/wiki/Paige_Matthews?oldid=1600971"
Community content is available under CC-BY-SA unless otherwise noted.