Leader of the Centurions

Protect all of humanity.

Take down Medusa and Hades.

Palutena is the deuteragonist of the Kid Icarus series.

She is Pit's divine superior and closest friend. She is usually giving Pit some helpful hints through her divine powers whether she isn't in her own palace or being kidnapped by Hades or Medusa.

In the newer Smash Bros. games, she takes the place of Colonel Roy Campbell as the wise mentor giving information.

She is voiced by Aya Hisakawa in the Japanese versions, and by Brandy Kopp in the English versions.

Despite being peaceful, Palutena can be quite a warrior herself. A prime example is when she fought Pit while being under the mind control of the Chaos Kin. She is also responsible for giving Pit certain magical powers and weapons like Pit's five-minute air flight.

In the first Kid Icarus game, Palutena tasked her faithful and loyal servant, Pit, to locate and retrieve the Three Sacred Treasures which were stolen from Angel Land (the original name for Skyworld) by servants of Medusa. Before, the Earth was ruled by both Palutena and Medusa - the Goddesses of Light and Darkness, though the latter was seemingly too dangerous to rule the Earth alongside her after watching her terrorize humankind by drying their crops, plaguing monsters upon them, and turning the humans to stone, angering Palutena to the point where she cursed Medusa to appear hideously and banished her to the Underworld. After Medusa steals the Treasures, she then proceeds to turn Palutena's army to stone, and subsequently defeating Palutena in battle, capturing her and imprisoning her within the Sky Temple. While trapped in the Sky Temple, Palutena mustered up the last of her powers to send Pit a bow and arrow, having escaped from his prison in the Underworld and sets out to rescue her.

Kid Icarus: Of Myths and Monsters

In the sequel to the first Kid Icarus, a few years after the death of Medusa and defeat of the Underworld Army, Palutena had a nightmare where she watched as Angel Land was destroyed by a coming evil, which was thought to speculated to be a foreshadowing of a coming invasion by a demon called Orcos. Pit was summoned by Palutena and orders him to take part in very special training so he would have the power to wield the Three Sacred Treasures. While Pit was on his mission, Lady Palutena kept the Treasures protected by entrusting them with three guardians, so Pit would be able to obtain them after he completed his training. Once Pit completed his special training, Palutena bestowed the Three Sacred Treasures upon him, equipping them on him, now capable of defeating the demon, who had turned Palutena to stone after revealing himself to them. Pit had quickly entered in combat against Orcos to defeat him, so he could save his goddess from the demon.

She is usually wise and kind-hearted, but there are times that Palutena can be playful, and usually teases Pit on occasion. She can also have the occasional thing about food, thus it could mostly make her hungry as well as it may make Pit hungry too. Often times, Palutena's playful mood threatens Pit's life, like how she doused him with her "patented monster pheromone", which, as the name implies, attracts monsters to whoever is wearing the pheromones.

Most of the time, Palutena shows herself as a playful goddess that is always looking for a way to tease Pit, but truthfully, she is shown to care a great deal about Pit, especially when his wings were scorched while trying to save Dark Pit from the Chaos Kin after already using the Power Flight which was granted to him by Viridi, the Goddess of Nature. She has also shown that she enjoys Pit's company very much, implying that she missed him throughout the past three years of him being trapped inside the Ring of Chaos by the Chaos Kin.

After Magnus helped Pit regain possession of his own body, the angel returned to a destroyed Skyworld with the help of Viridi, who explained that Palutena had "gone off the deep end" by destroying her's and Pit's home, still fighting the Underworld Army, but was now humanity's enemy, too.

When Viridi shows the angel the Light Goddess' temple, Palutena appears in a similar way to how Viridi appeared in Chapter 11, after dropping a Reset Bomb on the humans, saying that it has been quite a long time since they've seen each other and that she was tired of protecting humanity and having to deal with him, saddening Pit that his beloved goddess was trying to kill him by throwing giant chunks of Skyworld at him, not wanting to believe this was at all true, though Viridi reassured him that this was, in fact, really happening, whether he liked it or not. However, Pit knew that Palutena would never act this way, having a sneaking suspicion that she was being manipulated by someone or something.

After Pit saves Palutena and Dark Pit, she sees Pit's wings have been scorched, lifting his near-dead body off the ground and remembering him saying that if he had one wish, he would wish for the ability to fly all on his own, and proceeded to hug him, showing a great amount of care and sympathy to her near-dead friend. A day after, Palutena instructed Dark Pit to locate the Rewind Spring, where he would have to dip his wings in for just a second and not a second later, so Pit would be resuscitated from his unconscious state. When Pit regains consciousness, he speaks to Palutena in an overjoyed tone, expressing that he's missed her so much, and her the same, bringing him back home.

When Pit defeats Hades in a final attempt to cease his plot to take over the entire world and overthrow all gods, Viridi begins arguing with Pit about the basic standards of humanity, though Palutena asks for her fellow goddess to allow Pit to have his moment of victory, as he has saved everyone and not just all humans.

In her character reveal trailer for Super Smash Bros. 4, she appears to be observing a duel between Pit and Link, stating that the latter is quite an impressive fighter for a mortal. She intervenes in the fight to save Pit from Link's Gale Boomerang, though she claimed that she wasn't there to save him, but was there to fight Link. Pit thought the goddess was joking, however, she told him that she's no stranger to battle, reminding him of the time she fought him under the control of the Chaos Kin.

In the opening cinematic for Super Smash Bros. Ultimate's "World of Light" story mode, Palutena appears alongside the fighters of the series, including the newcomers to the game, on a cliff, ready to battle a new foe that threatens the universe - Galeem and his army of Master Hand clones. Galeem began absorbing all the Master Hand's and created a black hole, launching a barrage of light beams at everyone, including Pit, Palutena and Dark Pit. Palutena watched as the other fighters were engulfed by the light and granted the Power of Flight to both Pit and Dark Pit, while using a protective barrier to protect herself from Galeem, trying to buy both of them some time to escape, showing that she is protective of Pit, not wanting to see him be killed by the Lord of Light. 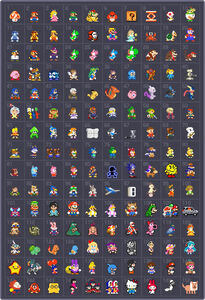 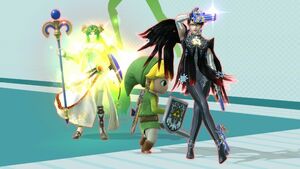 Palutena along with Bayonetta and Toon Link. 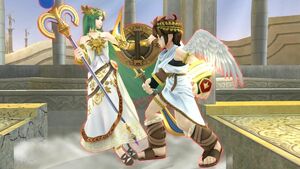 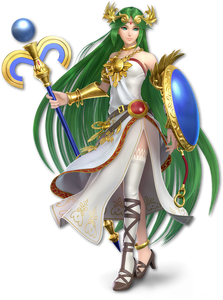 Palutena as she appears in Super Smash Bros. Ultimate. 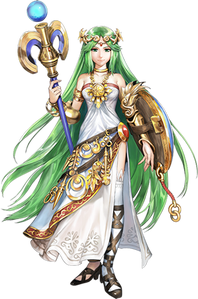 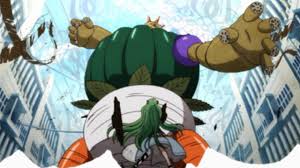 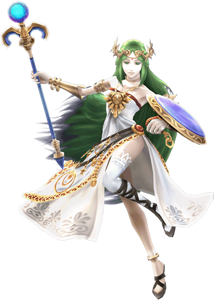 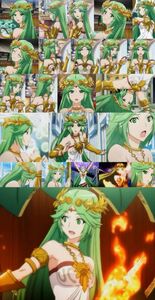 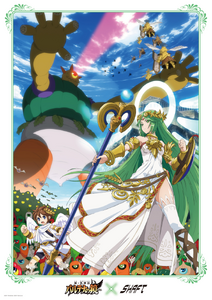 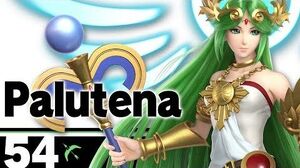 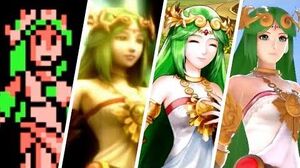