She is the only daughter of Gohan and Videl, who married sometime after the Majin Buu Saga.

She is the granddaughter of Goku, Chi-Chi, Mister Satan and Miguel.

She is the great-granddaughter of Bardock, Gine, Ox-King and Ox-Queen.

She is the niece of Goten, though she tends to treat him more as a big brother.

She is the great-niece of Raditz and Turles.

She is the adoptive great-great granddaughter of Grandpa Gohan.

She regards the family of Bulma and Vegeta as family as well, and may sport a crush on Trunks. Her name derives from two traditions: Goku's family naming system, based on foods, and Videl's, based on mythological and religious tricksters. Like with Goten, Trunks and Bulla, it is unknown if she was born with a tail.

While her power level is formidable and should never be underestimated, she is also never shown to become a Super Saiyan. Akira Toriyama has said he struggled with what she would look like in that form, while fan speculation has placed Gohan's 'Mystic Saiyan' mode, which involved SSJ-like power without the physical transformation, as the cause for this. However, only a brief portion of her life is ever depicted in the series, and since her own descendants had this power, it remains possible she developed it later on.

Battle of the Gods Saga

Pan was born in Age 779, a few months after Goku's battle with Lord Beerus, with her mother looking after her while Gohan is at work. Mr. Satan often spends time with her and wants her to be his successor, both her father and grandfather want her to be a martial artist.

One day while Mr Satan is visiting Gohan's house to see Pan. When he returns from his science conference, he changes to his Great Saiyaman person and spars with Mr. Satan, while holding Pan. Pan is amused, Chi-Chi scolds them, wanting her granddaughter Pan to grow up "lady-like". Chi-Chi, Bulma and Videl later talk about Pan's upbringing. Videl concludes that Pan should grow up the way she would want to, she doesn't mind Pan becoming a martial artist, because Videl states that's how she met Gohan.

She was later babysat by Piccolo as her parents were out, she is amused by him making funny faces and peek-a-boo. He continues to play with her until her parents had returned, and Videl gently holds her.

Pan was seen crying with Videl comforting her, shortly before Frieza uses his Earth Breaker attack to destroy the entire planet, killing Pan and Videl along with most of Earth's inhabitants. Fortunately, Whis uses his Temporal Do-Over technique, allowing Goku to kill the self-proclaimed "Emperor of the Universe" with a God Kamehameha. Afterwards, Gohan returns home and wants to become stronger in order to protect his family. Pan smiles, happy to see her father again.

Pan travels along with everyone to the Nameless Planet, where Beerus and Champa's Martial Arts Competition is taking place. She watches the match as a spectator on her mother's lap. Videl covered her eyes when Vegeta gave Cabba a vicious beating.

Gohan invites Future Trunks to his house to meet his family. Pan greets Trunks by squirting milk at his face and does the same with Gohan and Mr. Satan, she happily flies around with Gohan (as the Great Saiyaman) playfully chasing behind her. Later on, after Mr. Satan leaves Pan with Future Trunks, the young infant becomes a handful, and playfully trashes the living room, almost pulling on Trunks' sword in a tug-of-war like manner, until Gohan stops her. While outside, Pan was seen playing in the sand while Gohan and Trunks conversed. Pan and her family bid farewell to Future Trunks.

Pan later fell seriously ill with an incurable illness and Gohan used the Dragon Balls to cure her. She was later kidnapped and had her life threatened by Barry Kahn. She was rescued by her mother and watches as her father fights him. Pan is also present at the Universe 6 vs. Universe 7 baseball game, where she is seen sitting on Videl's lap.

An older Pan appears briefly in the last few episodes of Dragon Ball Z. She is only four-years-old at the time. Since ten years have passed since the defeat of Kid Buu, it seems she was born six years after that. She is shown to be utterly devoted to three things: Her grandfather, eating and training, and at this time, she wore a miniature version of Goku's Turtle School Gi. Perhaps as a sign of maturity and perhaps as a sign of surrender to the realities of her Saiyan family, Chi-Chi no longer even tries to restrain her as she did Gohan.

Battle of the Gods

It is revealed that Videl is pregnant with Pan, Dende is the first to find out when he was healing her after Gohan accidently shot her. Dende was about to tell the others, but Videl told him not to as she wanted it to be a surprised. After a failed attempt in making Goku a Super Saiyan God and finding out they need a sixth Saiyan, Videl tells them that she can help as she is pregnant with a baby that has saiyan blood. Everyone is happy with the news, especially Gohan. After that, Videl and Pan help Goku become a Super Saiyan God.

Pan is seen briefly at the start of the movie, being babysat by Piccolo. After Gohan and Videl come home, Gohan tries to get Piccolo to hold his daughter, but he refuses.

In the first saga, Pan, Goku and Trunks go into outer space to collect the Black Star Dragon Balls in order to make sure that the Earth doesn't explode. The trio get into many adventures and even meet a miniature robot named Giru, who Pan befriends.

In the second saga, Pan, Trunks and Goku land on a planet ruled by robots. There they find a machine mutant known as Baby. They think they've killed him after Goku and Trunks blast him, but unknown to them, Baby manages to survive. The trio goes back to Earth where Baby infects the entire planet, including Gohan, Videl, Chi-Chi, Goten, Trunks, Bulla, Bulma and Vegeta, the latter of whom has been transformed by Baby into his permanent host. Only Mr. Satan, Good Buu and Uub manage to escape Baby's clutches. After Goku transforms into a Super Saiyan 4, Pan, Gohan, Goten, Trunks, Mr. Satan and Majuub (a fusion of Good Buu and Uub) help him defeat Baby and turn Vegeta back to normal.

In the third saga, Pan helps the Z-Fighters fight Super 17, but is ultimately defeated by the android. After Goku and Android 18 kill Super 17, the entire group attempts to summon Shenron, but Evil Shenron appears and summons the Shadow Dragons to destroy Earth.

In the final saga, Pan along with Bulma, Gohan, Videl, Goten, Trunks, Chi-Chi, Majuub and Mr. Satan help Goku and Vegeta defeat Omega Shenron. After Goku leaves with Shenron, Vegeta tells Pan to take care of Goku's clothes as they may be the only thing left to remember him by. She becomes the grandmother of Goku Jr. 100 years later.

100 years later, Pan, now 114-years-old, trains her grandson, Goku Jr., into making him the strongest warrior on the galaxy just like his great-great-grandfather Goku. 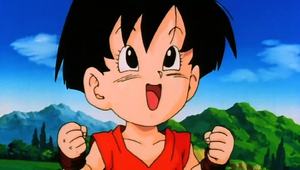 Young Pan towards the end of Dragon Ball Z 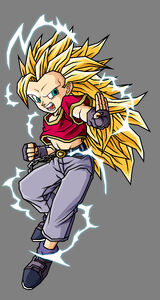 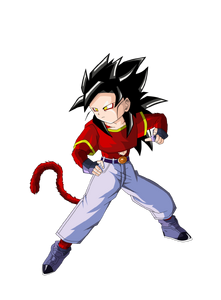 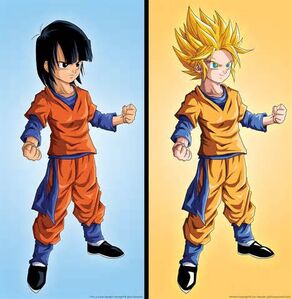 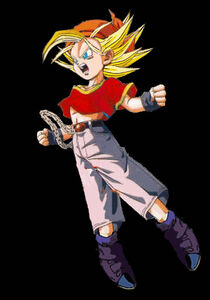 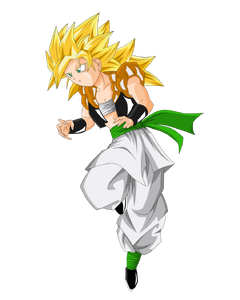 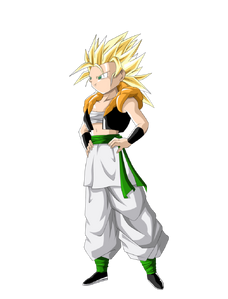 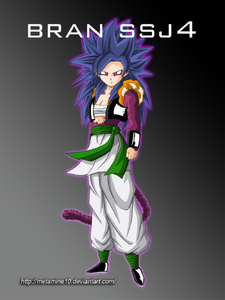 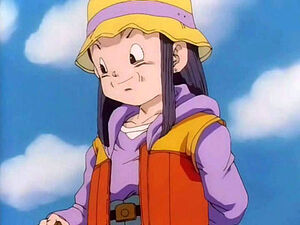 An elderly Pan in the epilogue of Dragon Ball GT 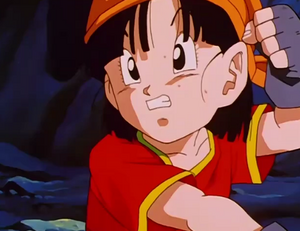 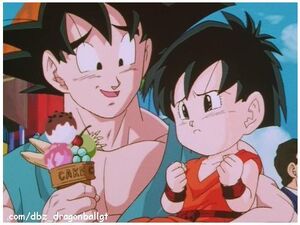 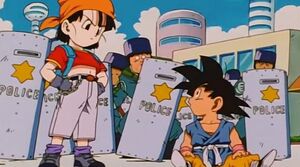 Pan telling Goku to stay out of her fight with the robbers, unaware that it is actually her grandfather. 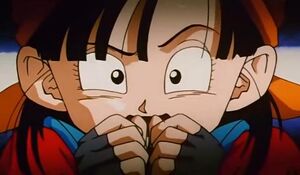 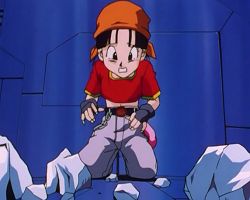 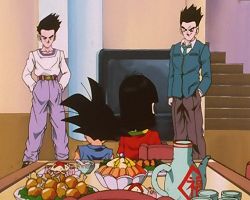 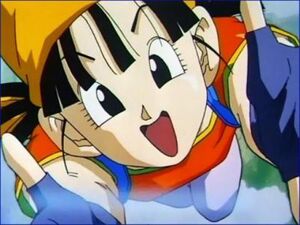 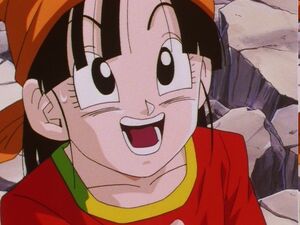 Retrieved from "https://hero.fandom.com/wiki/Pan_(Dragon_Ball)?oldid=1722178"
Community content is available under CC-BY-SA unless otherwise noted.