Pandoria is one of the main blades of Xenoblade Chronicles 2. Pandoria uses the electric element, wields a [Big Bang Edge], and acts as an Attacker in battle. Her appearance recalls the steampunk style, wearing an elegant costume consisting of big glasses, a hat and electric bulbs. Her glasses eventually lose their opaqueness.

She was voiced by Ryō Hirohashi in the Japanese version, and by Becca Stewart in the English version.

Pandoria, unlike Brighid, has no evidence of being passed down as a royal family Blade. She is eventually awakened by Zeke, and when he is banished from Tantal, she joins Zeke in his travels.

One day, Zeke sustains heavy injuries while traveling through a forest. Pandoria attempts to carry Zeke to safety but collapses and falls unconscious. Amalthus arrives on the scene and takes part of Pandoria's Core Crystal and implants it into Zeke's heart, thereby saving both of them. In return, Zeke and Pandoria became special envoys for Indol to find and test the new Driver of the Aegis.

Pandoria fights the party alongside Zeke at Cobalt Cliffs, nearby the Old Factory, and at Ysheva Harbor. She eventually joins the party with Zeke. Pandoria is also revealed to have a special connection to the Titan Genbu, as she is able to summon the Titan as long as the Omega Fetter is in use. After Zeke reveals their backstory in Spirit Crucible Elpys, her glasses become transparent. 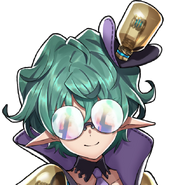 Add a photo to this gallery
Retrieved from "https://hero.fandom.com/wiki/Pandoria?oldid=2134826"
Community content is available under CC-BY-SA unless otherwise noted.