Loyal Warrior
Pang De (in Chinese: 龐德) is a character in the 14th-century Chinese classic novel Romance of the Three Kingdoms by the late Luo Guanzhong, and its multiple adaptations. He is one of the generals of Ma Teng and later Cao Cao.

Pang De started serving Ma Teng as a simple warrior, he was said to be very nice who is extremely loyal to his lords. After the supervisor was killed during the rebellion, he continued to follow Ma Teng. Later on, Ma Teng would combine the strength of his forces with Han Sui's forces who had been rebels two years earlier. They used Wang Guo as a leader they could control, then together attacked the areas around Chang'an. After the huge defeat they suffered in the battle of Chencang, there were fights between the rebels. During the battle, Pang De also contributed by defeating Qiang and Di's forces. Thanks to his efforts, Ma Teng could become one of the great rulers of Liangzhou and Han Sui was crowned colonel by Ma Teng, Pang De immediately indulged their arrogance and succumbed to one sentence.

Yuan Shang sent his general, Guo Yuan, to lead a joint army of Yuan Shang and the Xiongnu tribe to invade Hedong. At first, Pang De and Ma Chao were sent by Ma Teng to help one of Cao Cao generals, Zhong Yao to attack the enemy and win the battle, Pang De accompanied Ma Chao in Pingyang to resist Guo Yuan and Gao Gan. Pang De took the lead and attacked Guo Yuan and Gao Gan. He won the victory and became a relative of Guo Yuan, Pang De won a first-level hand, but did not know that this is Guo Yuan. After the battle, everyone said that Guo Yuan was dead and would not get his head. However, Pang De took out a skull in the bow after the late night. Since Guo Yuan was the lord of Zhong Yao, he cried at the head and Pang De pleaded guilty to Zhong Yao.

After Zhang Baiqi rebelled against Hongnong, Pang De resumed with Ma Teng. Every time he engages, Pang De often resists the enemies and bravely defeated Ma Teng's troops. Later on, Ma Teng served as the defending commander and Pang De stayed under Ma Chao. After Ma Teng was arrived to Xuchang, his son Ma Chao had temporarily taken over the leadership of the army. In the Battle of Tong Pass, Ma Chao then decided to make peace with Han Sui for a while, but he vowed to kill Cao Cao and avenge his father and brother's death. Ma Chao also escaped and formed a close alliance with the governor Liu Zhang. However, after this, Pang De was continue to followed Ma Chao into Hanzhong, they were later went to joined the warlord Zhang Lu. When Liu Zhang was attacked by Liu Bei, Ma Chao was sent by Zhang Lu to suppress Liu Zhang's territory.

Because he was instigated by Liu Bei, Ma Chao was framed to kill his colleague Yang Bai. After he escaped from Zhang Lu and brought his troops under his command to joined Liu Bei, Pang De is already sick and to stay in Hanzhong. Pang De was chosen by Zhang Lu yet led to the defense of Yangping Gate under his own initiative, Cao Cao remembered the begging of the most generals and meaningful to catch him. Xiahou Yuan, Xu Chu, Xu Huang, and Zhang He were all intent on acute concealment of discussions with Cao Cao, Pang De instead felt that they would be blow when he depended on himself. Will actually blocked Zhang Lu in the interior, Cao Cao should think of another enlightenment at well soon to send a sender to support Yang Song, Yang Song had the secret surrender information of Pang De. When Hou Yin was rebelled and took over Wan Castle, Pang De was sent with Cao Ren to drown the rebellion.

After they finished the task, Cao Ren was ordered to settle in Fan Castle. As a result, Pang De was placed under Yu Jin's command who would be sent to fight the invasion of Liu Bei. The leader of the enemy forces at that time was one of the enemy generals respected by many people, Guan Yu. At that time, Guan Yu had divided a number of his troops surrounding of Xiangyang and Fan Castle to suppress enemy movements. Given the Pang De's older brother, Pang Rou and previous masters, Ma Chao was on Liu Bei's side, many people in Fan Castle doubted Pang De's loyalty. In order to prove his loyalty, Pang De eventually meet Guan Yu and Guan Ping, all three of whom fought in the ordinary after the occasion with uneven. Yu Jin had to lead his troops to attacked Shu when he keep Cao Ren safe, Pang De shot arrows on Guan Yu's arms before coming to fight with him.

Yu Jin is always afraid of Pang De being in danger, Guan Yu had to give up his attitude but was as bold as them. Wei came on time to testify with Pang De and Yu Jin, Guan Yu was preparing to conduct a flood attack with the generals. Wei definitely noticed that the heavy rains would cause leniency and minded that he would remind Yu Jin, Pang De resisted Zhou Cang's armies after praising their credentials. Desireing to destroyed them, Pang De was defeated by Zhou Cang in the confrontation with Shu. By being over-stressed on the battlefield, Pang De is innocently to taught them and manipulated by the enemies. Even if the memory is not very good and not to be taken by others, Pang De is unnecessary to interfere with them and sustain his own rumors.

After two weeks of heavy rains, the Han River beside to the Fan Castle. Guan Yu and Guan Ping besieged their enemies after a sensation, Pang De had the right to follow the assault on them and Yu Jin's forces immediate run into the gate to save his armies. Besides that, Guan Yu should led the navy to set fire to the largest ship after Pang De and his several subordinates forced retreated above the dam. Meanwhile, Pang De also fired back with incredible accuracy. Mostly of Yu Jin's troops who were in the river, surrendered to the enemy and were aid by Guan Yu's troops. Seeing this, Pang De, Dong Heng, and Dong Chang's colleagues suggested that Pang De shall surrender.

Hearing this, Pang De is already angry and immediately executed them on the spot, then he resumed his resistance. The battle continued from morning to evening, and the attack from Guan Yu's forces slowly became more intense. Because of running out of arrows, Pang De and his armies were forced to advance into the melee. Thus the water level can be increased and almost all Pang De's forces have been surrendered to enemy. Pang De failed in the confrontation with the enemy, hoping to be executed while he surrendering to Guan Yu. After Pang De dies, his sons decided to succeeded him. 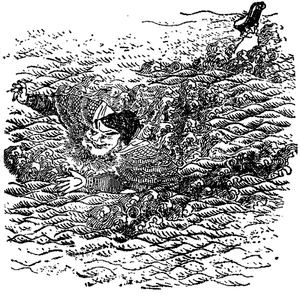 Pang De in Romance of the Three Kingdoms. 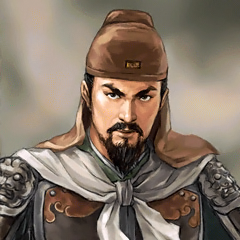 Pang De in Romance of the Three Kingdoms IX. 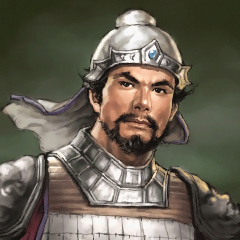 Pang De in Romance of the Three Kingdoms X. 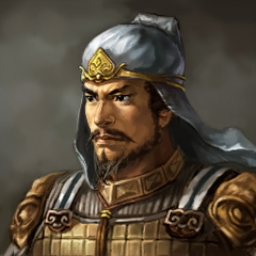 Pang De in Romance of the Three Kingdoms XI. 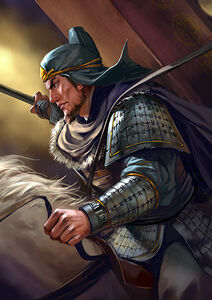 Pang De in Romance of the Three Kingdoms XII. 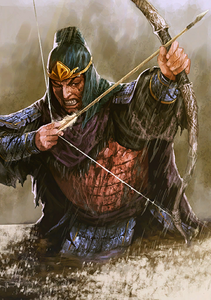 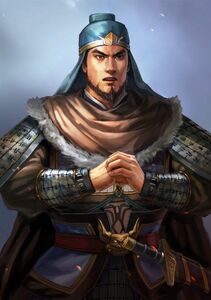 Pang De in Romance of the Three Kingdoms XIII. 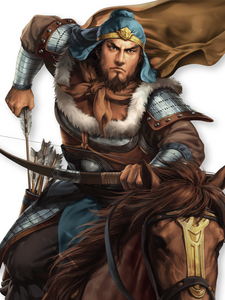 Pang De in Romance of the Three Kingdoms XIV. 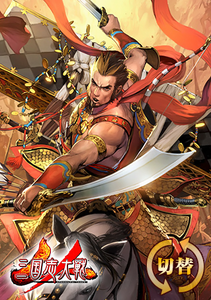 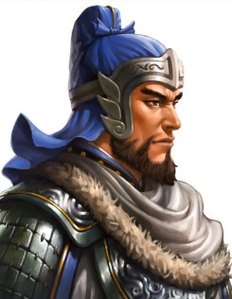 Pang De in Romance of the Three Kingdoms: The Legend of Cao Cao. 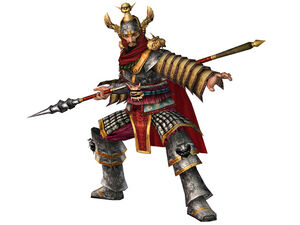 Pang De as he appears in Kessen II. 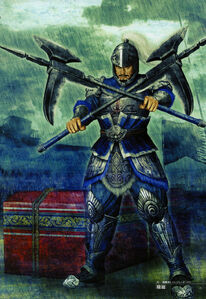 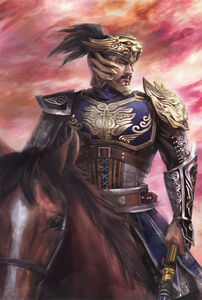 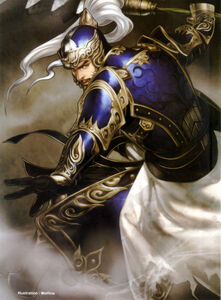 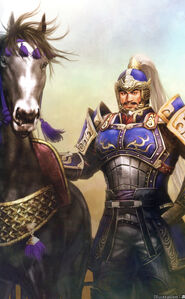 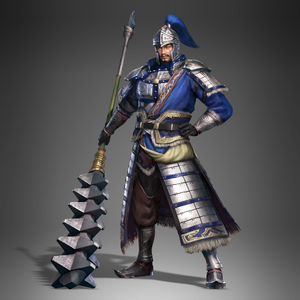 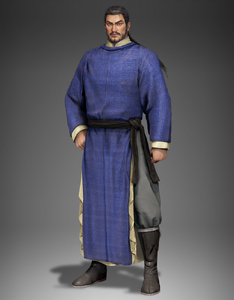 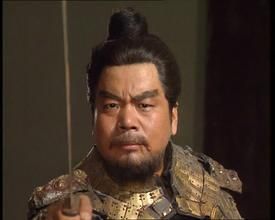 Pang De in Romance of the Three Kingdoms (1994).
Add a photo to this gallery 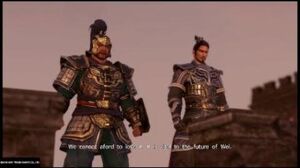 Retrieved from "https://hero.fandom.com/wiki/Pang_De?oldid=1913557"
Community content is available under CC-BY-SA unless otherwise noted.