Witness the wonders and beauty of reality.

Pangloss, also known as the Flame, was a god created at the very beginning of time who wandered the earth seeking to aid all who lived there. He is one of the more benevolent deities in the universe of the SCP Foundation, helping humanity whenever he can.

The deity that would later be known as Pangloss was born alongside the Vision from the "Nothingness" that preceded all of creation. At the time Pangloss was known as the Flame and represented the beginning of all light, while the Vision, who later become known as Saturn Deer, was his opposite, representing the end of that light. The Flame eventually created the "Heart of Flame" in order to burn more brightly, and the heart began speaking words which became reality, eventually creating all of creation and life.

After seeing these creations, the Vision visited the youngest of the newly created 37 humans, and granted that man knowledge and power, which corrupted the young man into the insane Beast of Heavens. Fearing that the beast would harm the rest of humanity, the Flame took the beast away from his brethren. Feeling sorrow for separating the poor beast from his kind, the Flame rechristened himself Pangloss and began wandering among the lifeforms of Earth, helping those in need by leaving notes from his journal. Some of these notes, which stated "Don’t let the fire die" would eventually be discovered by the SCP Foundation in the groves at the base of Mount Kazbek in Georgia, in the Great Rift Valley in Kenya and in the Indus River basin, and designated SCP-1612.

While wandering the ancient Earth during day, he witnessed a couple of primitive humans. After seeing him, the humans were terrified, but did not run and instead held each other close. Pangloss was fascinated by the love of these humans and became enamored with the race. He believed that humanity could achieve great things in the future, but as long the Yeren roamed the Earth, he thought that humanity could never have that chance. Since he didn’t thought much of the Yeren, unlike his fellow deities, Pangloss decided to grant humanity knowledge and power in form of his notes in order to overthrow the advanced Yeren. Humanity achieved this, to the point where even the memory of the Yeren was no more, but Pangloss became saddened upon witnessing the bloody wars the humans caused between themselves, but still hoped that one day humanity could find love, similar to his own love he had for them.

One day, a man named Polyakov came upon one of the notes of Pangloss, and began farming them. Pangloss found out about this and as a reward for this, Pangloss showed Polyakov the Flame of Wonder present between the world and the living beings and taught him how to use it. Polyakov use this new ability to create many wonders such as miracles and machines, becoming known as the Wonder-Maker. Eventually Polyakov would take a woman named WAN under his mantel, teaching her just as Pangloss had taught him.

During his wanderings, Pangloss created some doors which each lead to small volumes of atmosphere in which humans could survive located in the vacuum of space. This allowed individuals to witness the beauty of space and the stars and in each door Pangloss lefts notes which encouraged people to look at the beautiful stars. The Foundation would designate the anomaly surrounding these doors as SCP-1685.

Pangloss eventually arrived at the palace of the emperor of Qin, giving the emperor one of his notes and telling him about the wonders of reality. However, the emperor was uninterested about this and asked Pangloss how to achieve immortality. Pangloss answered by stating that if he did great things then he would live forever in the hearts of the people. This angered the emperor who proceeded to burn Pangloss' note causing a disappointed Pangloss to leave and never to be seen again.

Following the death of the god Llao, Pangloss inscribed a note referring to Llao's tombstone. This note took the form of a log that constantly floated in the Crater Lake in which Wizard Island was located. After the Foundation found the log they designated it SCP-3310 and found out that beside marking that the tombstone marked the location of Llao's corpse, it also said that it prevented the god from reviving himself.

In 1997, the god known as He-Who-Walks-Beneath-Dreams, visited the town of Daleport in New England, which was inhabited by a cult that summoned various gods and had them fought each other to death with the winner becoming the new figure of worship by the cult, and would later be designated SCP-1936 by the Foundation. While there, the malevolent god caused a series of events during a week which led to the mutation and death of most Daleport's citizens. Pangloss felt great guilt for not being able save the poor citizens from the god, and left apologizing notes throughout the town, mostly in public restrooms or sewn into the severed organs of the mutants. When a Foundation splatoon entered the town and began gathering surviving citizen Pangloss joined them and used his powers to keep them safe from the mutated monsters. Pangloss eventually put a spell around the town hall that would allow people to escape the town and lead the personnel to the location before undergoing some convulsions while a dupstep remix of Owl City's unreleased song "Embers" faintly played through the halls' microphones. After making sure that everyone safely fled he warned the hostile creatures they were under his protection.

Pangloss eventually created two sapient fishing trawlers which were in love with each other, and would later be designated SCP-1522-1 and SCP-1522-2 respectively. However, the Global Occult Coalition decided to terminate the ships causing mass disaster. Following the tragic destruction of the ships, Pangloss visited their wrecks while they were being transported to Site 6, and left a note on the deck of the vessels stating "They were happy, before the end. Not all ships have to pass in the night". Some witnesses reported his sighting, but the Foundation was unable to detain him.

While Pangloss was writing in his notebook on an island in the middle of the sea, he felt that something was wrong and found out that the sea had receded around the island due to SCP-169. Pangloss was not worried by this unusual event and decided to explore the tidal pools left on the seafloor. After going pass the inhabitants of the island he heard screaming and saw the residents fleeing from a giant wave approaching, which was also caused by 169. Pangloss decided to leave a note saying "The blue sea calls to me, and I answer her." before raising his arms to greet the wave only for him to be washed away.

The Stars Do Not Wait For You

When the reality bender known as SCP-1915 became the all destructive "Absence", Pangloss and Saturn Deer tried to stop the entity from destroying the entire Earth by confronting him outside the city of Acre, but neither of them succeeded. Pangloss tried to gather his dying flame, but was covered slowly by the desert’s sand. The Absence went on to destroy all life on earth, leaving Pangloss and a few of other immortals the only survivors.

When Pangloss began protecting several Foundation personnel and Daleport civilians he was described as a radial organism made of fire. After the destruction of SCP-1522 when Pangloss visited 1522's wreckage, he was simply described as an unclear humanoid with no known details. In most fan arts, Pangloss is depicted as a flaming anthromorphic humanoid with antlers, but in the site he is never described as such.

Pangloss proved to be one of most kind hearted gods in the universe. He was extremely optimistic, to the point of being a naïve, and had nothing but love and compassion, especially towards humanity. He highly values humanity and nature, and seeks to protect them at all cost. However, he also seems to be a pacifist as he rarely engages into any sort of fights. Just like Mekhane he believes that humanity can achieve many great things in the future if they are in the right direction. Pangloss also greatly enjoys writing various meaningful poems, often describing the beauty of nature, life and reality.

Pangloss seemingly has powers similar to those of his fellow deities, but to what extent is unknown. He was able to create the Heart of Flame which went on to create the rest of reality, control armed robots to protect innocent people, inscribe protective runes and project fire. However, he was no match for SCP-1915 in its full power. 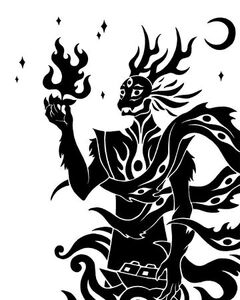 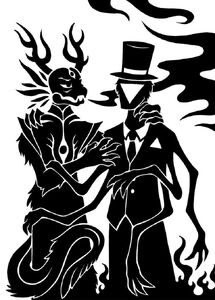 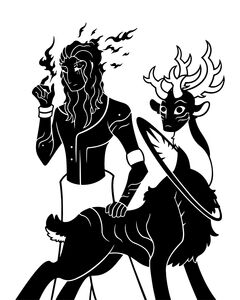 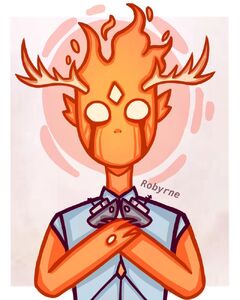 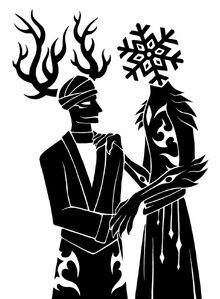 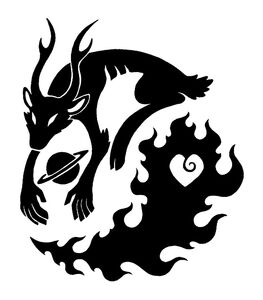 Pangloss and Saturn Deer from the tale "Spark of Creation". 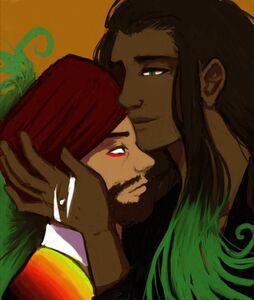 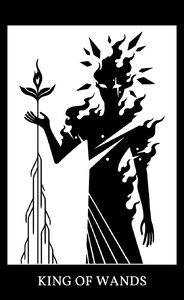 Pangloss as the tarot card King of Wands.